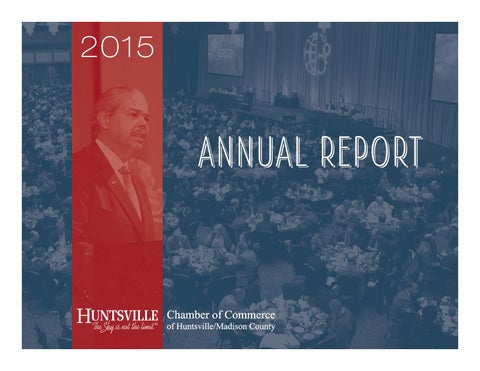 chamber of commerce of huntsville/madison county

A MESSAGE FROM CHIP CHERRY, CCE

In 2015, the Chamber celebrated an even more energized and engaged private sector – in partnership with a strong public sector – which stimulated growth in the economy. The power of this partnership is reflected in the job and investment numbers on page 6 – 3,546 new jobs and over $413m in new investment. The investments made by new and expanding companies’ flows through the region’s economy – creating opportunities for all of our members. Thank you for engaging with us and making what we do possible. The timeline on the following pages provides an insight into the pace of activities during 2015. Member engagement was significant with the launch of new digital and social marketing tools, and more than 10,000 members participated in our programs. Additionally, professional networking opportunities, our Ambassador and Emissary programs, and our annual ChamberON campaign made significant impacts in member opportunities. We look forward to a strong 2016!

POLARIS PRESS CONFERENCE Polaris announced today that they will be opening an advanced manufacturing facility in Huntsville that will create up to 2,000 jobs over the next seven years.

Congressman Brooks’ briefing included his views on the past year’s progress on the issues that impact our region and his outlook for the year ahead.

These events offer a networking opportunity for members to come together in a relaxed social atmosphere.

Huntsville ranked among top cities for STEM jobs by SmartAsset

WOMEN’S BUSINESS COUNCIL FORUM The Women’s Business Council is an advocate for women-owned businesses. WBC hosts quarterly forums in an effort to support women in business. MAY 15, 2015

A week-long celebration including a Proclamation Signing, Concert in the Park, and a Chamber-hosted luncheon that featured Gen. John E. Hyten, U.S. Air Force, Space Command.

This Cummings Research Park After Hours event is a facilitated networking opportunity and social for member companies in the Park to discover and learn about technology being developed by other CRP companies.

We kicked off Small Business “Shop Small, Shop Local” Week with a Block Party on May 4.

An inspirational, highly fashionable, ladies-focused, networking experience. Attendees had an opportunity to connect with distinguished She.E.Os.

This annual event featured an address from Alabama Governor Robert Bentley on the State of the State and our community’s role.

Huntsville is NerdWallet’s second best place for tech jobs in the U.S.

CHAMBER U An innovative, educational business platform, giving the tools to navigate, grow and thrive in today’s changing workplace. All Chamber U classes were developed in conjunction with our member higher education institutions.

An Entrepreneur Forum – bringing together a panel of local entrepreneurs to offer insight on how to stay viable and successful through good and bad climates, followed by a Q&amp;A session.

HOLIDAY OPEN HOUSE The holiday event welcomed Chamber members, community and Redstone Arsenal senior leaders and local elected officials. Every year, it is one of the most celebrated community holiday events of the season.

Mayor Battle highlighted the city’s progress in economic development and presented his “annual report” to the citizens of Huntsville regarding the accomplishments from the past year and his outlook for the year ahead.

STATE OF THE CITY ADDRESS

Hosted leaders from 7 counties to develop strategies to ensure that North Alabama economic growth has a sustainable talent pipeline.

Held twice a year to provide a casual and lively atmosphere for business professionals to network, this event is all about business in action and making connections – in a tabletop exhibit format and ending with a BUSINESS AFTER HOURS event.

This annual event provided Senator Sessions an opportunity to update the business community on the past year’s progress on the issues that impact our region and his outlook for the year ahead.

Bloomberg: Huntsville is one of top metros to “Power the U.S. Economy”

Strategic Innovations events included ‘Beyond the Business Card &amp; Back’, ‘Joint Ventures in Government Contracting’, ‘Marketing Now &amp; in the Future’, ‘Networking with the Masses’, ‘Using Facebook to Grow Your Business’, ‘Social Engineering &amp; the Insider Threat’, ‘Doing Business with the Government’, ‘Build Your Marketing Toolkit’, and ‘Cybersecurity in the Digital Age’.

REDSTONE UPDATE Members heard from senior leaders from Redstone Arsenal – highlighting their diverse roles and missions, and share where these commands, organizations, and the installation are headed in the future. Command briefings + luncheon with keynote speaker MG Edward Daly, U.S. Army Materiel Command.

GoodCall : Huntsville is one of Best Metro Areas for Real Estate Agents

Boston Bus. Journal: HSV is #3 City where your money goes the farthest

economic development The Chamber is the lead economic development organization for Huntsville/Madison County, one of the most dynamic economies in the United States. Through local, state and regional partnerships, we recruit and retain jobs and capital investment, focusing on aerospace, defense, advanced manufacturing, information technology and life sciences.

Huntsville is one of top metros to “Power the U.S. Economy” – BLOOMBERG BUSINESS, SEPTEMBER 2015

CUMMINGS RESEARCH PARK Cummings Research Park (CRP) is the Nationâ&amp;#x20AC;&amp;#x2122;s second largest research park with 3,843 acres and 300 companies. We manage, market internally and promote CRP to expand industry and recruit new companies to a vibrant and connected community that fosters ingenuity, creativity and scientific achievements that solve our Nationâ&amp;#x20AC;&amp;#x2122;s most complex challenges.

MASTER PLAN PROJECT Coordinated with CRP stakeholders on determining factors crucial to a new comprehensive master plan for the Park. Drafted and led the RFP process for a comprehensive new master plan and market positioning analysis. Selected and began work with a consultant team led by

Held 12 focus groups and one public community input session during the initial stages of the master plan process.

Held a CRP Master Plan Announcement on September 3 at Digium.

HudsonAlpha opened the Smith Clinic for Genomic Medicine on its biotech campus in CRP. This clinic is the only clinic in the world to identify and diagnose rare diseases using genomics.

Organized, marketed and held the first-ever Food Truck Fest in CRP with 5 food trucks serving lunch to more than 300 employees that work in the Park. 8

GOVERNMENT &amp; PUBLIC AFFAIRS The Chamber represents the business interests of the Huntsville and Madison County area on the local, state and national levels of government, promoting policies and legislation that allow for the continued economic prosperity of the region. Roughly half of the local economy is a function of federal spending on military, space and homeland security concerns, consequently much of the Chamberâ&amp;#x20AC;&amp;#x2122;s government and public affairs efforts are focused on the growth and protection of these activities and the Redstone Arsenal. The division also conducts a number of events which are intended to enhance relationships with elected local, State and Federal officials and key federal partners.

WORKFORCE &amp; EDUCATION We are passionate about developing, employing and retaining the smart, talented people we have in our region. Through partnerships with industry, education and public sector stakeholders, we ensure our region has the quantity and quality of talent to meet employer needs and support sustained growth.

30 employers participated in the annual College &amp; Career Fair, reaching 5,000+ high school juniors and seniors from all three public school districts in our community with information about regional careers. Facilitated a $53,000 grant from the U.S. Chamber of Commerce Foundation to a local elementary school, the first-ever grant from the Foundation to an individual school.

together our business and education communities to highlight the Pre-K-12 education programs that are preparing students for long-term success in our region. Hired full-time workforce director to lead Chamberâ&amp;#x20AC;&amp;#x2122;s regional workforce and education initiatives. 12

MEMBERSHIP As the largest chamber in Alabama, the Chamber of Commerce of Huntsville/Madison County relies on a base of highly engaged members-from global corporations to middle-market companies to local entrepreneurs and small businesses-to support the organizationâ&amp;#x20AC;&amp;#x2122;s mission of making Huntsville one of the worldâ&amp;#x20AC;&amp;#x2122;s best places to live, work and build a business. As a champion of the entrepreneurial spirit, the Chamber provides an array of opportunities for small and medium-sized enterprises to participate in programs, events and activities designed to support and encourage growth in their companies as well as their contribution to the economic vitality of the region.

MARKETING &amp; COMMUNICATIONs The Chamber facilitates a strategic and purposeful flow of communication to our highly engaged members and general public. We communicate using a progressive, multi-faceted marketing strategy that includes traditional media, print, digital, and social media. Our strategy was designed to maximize reach to members and non-members, and to expand our sphere of influence in the community and around the globe.

Madison, Ala. named one of the 10 best small U.S. cities for working parents – THE CHRISTIAN SCIENCE MONITOR, AUGUST 2015

Chamber of Commerce of Huntsville/Madison County

BOARD OF DIRECTORS Robert Altenkirch

University of Alabama in Huntsville

chamber of commerce of huntsville/madison county