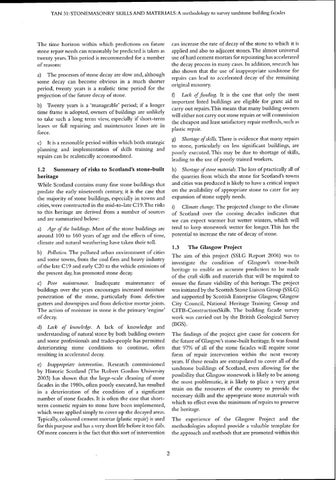 can increase the rate of decay of the stone to which it is applied and also to adjacent stones.The almost universal use of hard cement mortars for repointing has accelerated the decay process in many cases. In addition, research has also shown that the use of inappropriate sandstone for repairs can lead to accelerated decay of the remaining original masonry.

The time horizon within which predictions on future stone repair needs can reasonably be predicted is taken as twenty years.This period is recommended for a number of reasons: a) The processes of stone decay are slow and, although some decay can become obvious in a much shorter period, twenty years is a realistic time period for the projection of the future decay of stone.

L c k o f f i ~ t r d i t ~ qIt. is the case that only the most important listed building are eligible for grant aid to carry out repairs.This means that many building owners will either not carry out stone repairs or will commission the cheapest and least satisfactory repair methods, such as plastic repair. f)

b) Twenty years is a &#39;manageable&#39; period; if a longer time frame is adopted, owners of buildings are unlikely to take such a long term view, especially if short-term leases o r full repairing and maintenance leases are in force.

g) Sllorta,qe of skills. There is evidence that many repairs to stone, particularly on less significant buildings, are poorly executed.This may be due to shortage of skills, leading to the use of poorly trained workers.

c) It is a reasonable period within which both strategic planning and implementation of skills training and repairs can be realistically accon~modated. 1.2 Summary of risks to Scotland&#39;s stone-built heritage

h) Slrorta&#39;qe ofstotze materials. The loss of practically all of the quarries from which the stone for Scotland&#39;s towns and cities was produced is likely to have a critical impact 0&quot; the &quot;ailability of appropriate Stone to cater for any exp&quot;&quot;s0n of stone supply needs.

while scotland contains many fine stone buildings that predate the early nineteenth century, it is the case that the majority of stone buildings, especially in towns and cities,\vere constructed in the mid-to-late C19.The risks to this heritage are derived from a number of sources and are summarised below:

~ l c,latLse.i ~h~ projected ~ ~ change ~ to the ~ climate ~ scotland over the coming decades indicates that we can expect warmer but wetter winters, which will tend to keep Stonekvork wetter for longer.This has the potentid to increase the rate of decay of stone.

a) A g e of the brrildittqs. Most of the stone buildings are around 100 to 160 years of age and the effects of time, climate and natural weathering have taken their toll.

b) Pollutiott. The polluted urban environment of cities and some towns, from the coal fires and heavy industry of the late C19 and early C20 to the vehicle emissions of the present day, has promoted stone decay.

The aim of this project (SSLG Report 2006) was to investigate the condition of Glasgow&#39;s stone-built heritage to enable an accurate prediction to be made of the craft skills and materials that will be required to ensure the future viability of this heritage. The project was initiated by the Scottish Stone Liaison Group (SSLG) and supported by Scottish Enterprise Glasgow, Glasgow City Council, National Heritage Training Group and CITB-ConstructionSkills. The building facade survey work was carried out by the British Geological Survey (BGS).

c) Poor r~raitrtctlnrrce. Inadequate maintenance of buildings over the years encourages increased moisture penetration of the stone, particularly from defective gutters and downpipes and from defective mortar joints. The action of moisture in stone is the primary &#39;engine&#39; of decay. d) L c k of ktrotr~lc4qe. A lack of knowledge and understanding of natural stone by both building owners and some professionals and trades-people has permitted deteriorating stone conditions to continue, often resulting in accelerated decay.

The finding of the project give cause for concern for the future of Glasgow&#39;s stone-built heritage. It was found that 97% of all of the stone facades will require some form of repair intervention within the next twenty years. If these results are extrapolated to cover all of the sandstone buildings of Scotland, even allowing for the possibility that Glasgow stonework is likely to be among the most problematic, it is likely to place a very great strain on the resources of the country to provide the necessary skills and the appropriate stone materials with which to effect even the minimum of repairs to preserve the heritage.

e) It~approprinte itrtervetrtiotr. Research commissioned by Historic Scotland (The Robert Gordon University 2003) has shown that the large-scale cleaning of stone facades in the 1980s, often poorly executed, has resulted in a deterioration of the condition of a significant number of stone facades. It is ofien the case that shortterm cosn~eticrepairs to stone have been implemented, which were applied simply to cover up the decayed areas. Typically, coloured cement mortar (plastic repair) is used for this purpose and has a very short life before it too fails. O f more concern is the fact that this sort of intervention

This Technical Advice Note describes the methodology used during the Glasgow project undertaken by the Scottish Stone Liaison Group. This project aimed to determine the repair needs of the stonework in Glasgow, the quantity and the type of stone required and the skills that will be necessary to carry out the repairs. The TAN is split into 2 main parts, the first giving guidance on mechanisms and types of decay and the second gives a detailed description of the approaches and methods adopted when carrying out the survey and recording the results. 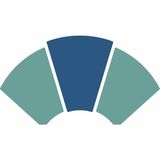