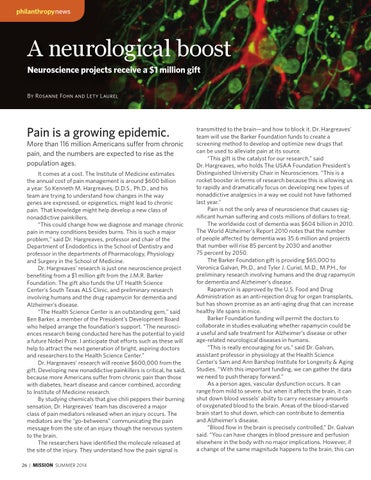 Pain is a growing epidemic. More than 116 million Americans suffer from chronic pain, and the numbers are expected to rise as the population ages. It comes at a cost. The Institute of Medicine estimates the annual cost of pain management is around $600 billion a year. So Kenneth M. Hargreaves, D.D.S., Ph.D., and his team are trying to understand how changes in the way genes are expressed, or epigenetics, might lead to chronic pain. That knowledge might help develop a new class of nonaddictive painkillers. “This could change how we diagnose and manage chronic pain in many conditions besides burns. This is such a major problem,” said Dr. Hargreaves, professor and chair of the Department of Endodontics in the School of Dentistry and professor in the departments of Pharmacology, Physiology and Surgery in the School of Medicine. Dr. Hargreaves’ research is just one neuroscience project benefiting from a $1 million gift from the J.M.R. Barker Foundation. The gift also funds the UT Health Science Center’s South Texas ALS Clinic, and preliminary research involving humans and the drug rapamycin for dementia and Alzheimer’s disease. “The Health Science Center is an outstanding gem,” said Ben Barker, a member of the President’s Development Board who helped arrange the foundation’s support. “The neurosciences research being conducted here has the potential to yield a future Nobel Prize. I anticipate that efforts such as these will help to attract the next generation of bright, aspiring doctors and researchers to the Health Science Center.” Dr. Hargreaves’ research will receive $600,000 from the gift. Developing new nonaddictive painkillers is critical, he said, because more Americans suffer from chronic pain than those with diabetes, heart disease and cancer combined, according to Institute of Medicine research. By studying chemicals that give chili peppers their burning sensation, Dr. Hargreaves’ team has discovered a major class of pain mediators released when an injury occurs. The mediators are the “go-betweens” communicating the pain message from the site of an injury though the nervous system to the brain. The researchers have identified the molecule released at the site of the injury. They understand how the pain signal is 26 | MISSION SUMMER 2014

transmitted to the brain—and how to block it. Dr. Hargreaves’ team will use the Barker Foundation funds to create a screening method to develop and optimize new drugs that can be used to alleviate pain at its source. “This gift is the catalyst for our research,” said Dr. Hargreaves, who holds The USAA Foundation President’s Distinguished University Chair in Neurosciences. “This is a rocket booster in terms of research because this is allowing us to rapidly and dramatically focus on developing new types of nonaddictive analgesics in a way we could not have fathomed last year.” Pain is not the only area of neuroscience that causes significant human suffering and costs millions of dollars to treat. The worldwide cost of dementia was $604 billion in 2010. The World Alzheimer’s Report 2010 notes that the number of people affected by dementia was 35.6 million and projects that number will rise 85 percent by 2030 and another 75 percent by 2050. The Barker Foundation gift is providing $65,000 to Veronica Galvan, Ph.D., and Tyler J. Curiel, M.D., M.P.H., for preliminary research involving humans and the drug rapamycin for dementia and Alzheimer’s disease. Rapamycin is approved by the U.S. Food and Drug Administration as an anti-rejection drug for organ transplants, but has shown promise as an anti-aging drug that can increase healthy life spans in mice. Barker Foundation funding will permit the doctors to collaborate in studies evaluating whether rapamycin could be a useful and safe treatment for Alzheimer’s disease or other age-related neurological diseases in humans. “This is really encouraging for us,” said Dr. Galvan, assistant professor in physiology at the Health Science Center’s Sam and Ann Barshop Institute for Longevity &amp; Aging Studies. “With this important funding, we can gather the data we need to push therapy forward.” As a person ages, vascular dysfunction occurs. It can range from mild to severe, but when it affects the brain, it can shut down blood vessels’ ability to carry necessary amounts of oxygenated blood to the brain. Areas of the blood-starved brain start to shut down, which can contribute to dementia and Alzheimer’s disease. “Blood flow in the brain is precisely controlled,” Dr. Galvan said. “You can have changes in blood pressure and perfusion elsewhere in the body with no major implications. However, if a change of the same magnitude happens to the brain, this can

Mission is the award-winning magazine of The UT Health Science Center San Antonio bringing you news of advancements in all university missions, schools, campuses and programs. 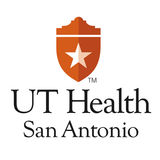