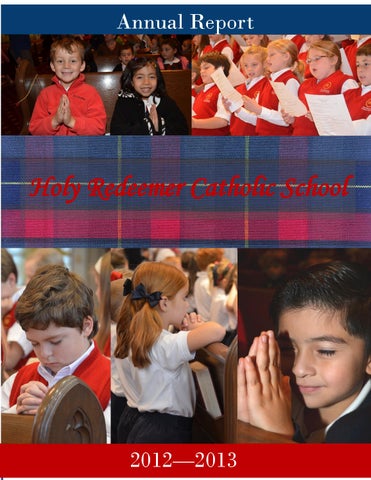 2012-2013 Letter from the Principal Dear Friends of Holy Redeemer, It is with pride and gratitude that we present to you the 2012-2013 Annual Report. It is our mission to provide a quality academic education within the context of faith and spiritual formation and a culture of Catholic values. We are blessed to be a school where faith, academics, community and excellence are not only part of our mission, but also part of our daily lives. It is your continued support that makes the pursuit and attainment of this mission possible at Holy Redeemer. A recent survey about Catholic Identity completed by our students, staff and parents confirms a strong sense of Catholic Identity in our school, not only in our Religion classes and in our liturgical celebrations, but in every class and in all that we do. This Catholic Identity, coupled with a strong academic program, produces accomplished and faith-filled graduates, ready for the academic challenges of higher education and ready to exemplify the love of Christ to those they will meet along the way. During this season of gratitude, as we reflect on the community we have built, we do so with the awareness that without the grace of God and the support of our parents and benefactors, we would not be able to accomplish all that we do each day. We are grateful for your support and ask that you keep the students, staff and families of Holy Redeemer in your prayers. May God bless you. With gratitude,

2012-2013 School Statistics Mission Statement Holy Redeemer Catholic School is a faithcentered community, dedicated to living the principles of the Catholic Tradition rooted in the Gospel of Jesus Christ. Our school’s environment and curriculum challenge the full potential of each child and embrace a visionary approach toward life-long learning. Authored: August, 1999

Philosophy Holy Redeemer School provides a Catholic education through which Gospel values are presented, lived and fostered. The administration, faculty, and staff believe:

 Our Catholic faith is evident in everything we do. Our community is committed to the success of our school. Our implementation of the curriculum is based on best practice research. Parent education is vital for the success of our instructional pedagogy. Our curriculum is implemented by highly credentialed and experienced teachers and administrators. Students’ learning is facilitated by teaching that is direct and systematic.

2012-2013 Financial Statement We have been truly blessed by the generosity of so many in our school community! A very special thank you to our 2012-2013 Annual Appeal chairs for a job well done!

2012-2013 Service Projects Holy Redeemer Catholic School is a faith-centered community that is committed to living the principles of the Catholic Tradition rooted in the Gospel of Jesus Christ. Our school community takes seriously Jesus’ command to live the Corporal and Spiritual Works of Mercy. From our kindergarteners to eighth graders, Holy Redeemer Catholic School’s mission is evident. Kindergarten students begin their journey of service by creating Christmas stockings filled with items for Catholic Charities’ Refugee Resettlement children to use in their new homes. First Graders multiply their talents and collected funds to purchase beds for children in orphanages run by the Mustard Seed communities of Nicaragua. Second Graders reach out to their home and school communities by organizing a coat drive to collect coats for children and adults being assisted by the Atlanta area St. Vincent de Paul Society. Third Graders realize the potential within themselves to help others less fortunate by walking in the shoes of children who have been suddenly removed from their families due to neglect. They multiply their talents to purchase back packs and items needed by these children who are assisted by the Foster Care Support Foundation. Fourth Graders practice stewardship of God’s creation through a year-long recycling project on the Holy Redeemer campus. Fifth Graders reach out to their school and neighborhoods to collect new and gently-used winter blankets for needy families received by North Fulton Community Charities. In Middle School, the students begin a formal program focused on the Corporal Works of Mercy. Sixth Graders work together in small groups in local organizations that assist the homeless. Seventh Graders explore the issue of hunger among low-income Georgians in the context of their faith and raise funds for local food banks by participating in Atlanta’s only Hunger Walk. Eighth Graders combine all their service experience from previous years to collaborate through small groups on various service organizations that focus on the Corporal Works of Mercy. Our mission of service for others reaches a new level every February. In place of Valentine’s Day parties, every Holy Redeemer student participates in a Service from the Heart hour. The students work together in their Saint Families on various service projects to emphasize the love of Christ for everyone, especially those most in need.

2012-2013 Saint Families In August 2012, Holy Redeemer initiated â&amp;#x20AC;&amp;#x153;Saint Familiesâ&amp;#x20AC;? among the school community. Saint Families were designed to create a greater sense of community among the student body. By matching students across all grade levels, students in different levels have a chance to get to know one another, make younger-older student connections, and have opportunities to work together. Saint Family activities occur once a month for 30-60 minutes. Some activities are service-oriented (Service From the Heart in February), some activities are faith-oriented (sitting as Saint Families during mass), and others are team-building (or just for fun.) Each Saint Family has a staff mentor. Mentors do not plan activities, just monitor the activity and make sure that everyone gets to participate. Eighth grade students are our activity leaders. If the activity requires prior instruction, we review this with eighth grade students prior to the meeting day.

2012-2013 Ways to Give When considering gifts to Holy Redeemer Catholic School, there are many opportunities that will not only benefit the school’s exceptional programs, but may also provide a tax-deductible contribution that is allowed by law. To learn more about ways to give to the school and its mission, contact: Jennifer Leonard, Director of Development at (770)-410-4056 ext. 216, JLeonard@hrcatholicschool.org.

Annual Appeal The Annual Appeal is the foundation of giving to Holy Redeemer Catholic School. As with most private schools, tuition does not cover the full cost of educating our students. Giving to the Annual Appeal each year bridges the gap between tuition income and the full cost to educate our students. Each year the Annual Appeal is an indispensable part of the school’s operating budget, enabling the school to fulfill its commitment to academic programs. Gifts made to the Annual Appeal are fully tax-deductible because no goods or services are received by the donor. 100% participation from faculty and staff, current families, grandparents and alumni is a valuable endorsement of the school’s mission and helps make us a stronger candidate for foundation and corporate grants.

Honorariums and Memorials Opportunities exist within the school to honor or memorialize a loved one. The Director of Development can assist with arrangements for these thoughtful gestures.

Cash Contributions Unrestricted gifts of cash are the most popular and convenient way to support Holy Redeemer Catholic School. Gifts can be made in a single contribution or pledged and paid in installments. An outright gift of cash qualifies as a charitable deduction for federal income tax purposes.

Matching Gifts Today many businesses have matching gift programs that will double or even triple an employee contribution. Some companies match the gifts of spouses and retirees as well, greatly increasing the impact of a donation. Matching gift information is available from the Development Office.

Gifts in Kind These non-cash gifts are items that the school needs and uses including, but not limited to. office supplies, computer equipment or printing services.

Securities Gifts of securities, stock or bonds benefit the donor and the school. This type of gift is tax-deductible and the donor may avoid paying capital gains tax on the appreciated stock or security.

Planned Giving The most common planned gift is through a donor bequest, trusts, gift annuities, real estate, memorial gifts, life insurance and other financial instruments. A codicil naming Holy Redeemer Catholic School as a beneficiary can be added to an existing will.

GRACE Scholars, Inc. Any Georgia taxpayer can make a donation to GRACE Scholars and qualify for the Georgia Private School Tax Credit. Donors receive 100% credit against their Georgia State tax liability. Money that would have gone to the State of Georgia is now supporting Catholic schools in Georgia. Please visit the GRACE Scholars website: www.gracescholars.org for more information.

2012-2013 Donor List In 2012, an Endowment Fund for Holy Redeemer Catholic School was established with the Catholic Foundation of North Georgia Inc. A $10,000 gift from the Joseph Mitchell estate, nephew of “Gone With the Wind” author Margaret Mitchell, created this fund. Holy Redeemer will continue to contribute to this endowment until it reaches $1 million.

2012-2013 Donor List The Annual Report has been prepared by the Development Office. Every effort has been made to accurately list all contributions made through June 30, 2013. Should any inaccuracies or omissions appear, please accept our apology for any inconvenience.

Mr. and Mrs. Robert B. Gerker

2012 GRACE Scholars, Inc. In 2008, Georgia lawmakers voted to allow state taxpayers to redirect a portion of their State Income Taxes to support Catholic Education. The maximum tax credit for a dual income family is $2,500 and for a single is $1,000. Each donation provides a dollar-for-dollar tax credit. GRACE Scholars, Inc. provides scholarships to those families in need of assistance for Catholic Education for grades K-12. Thank you to the following taxpayers who re-directed their 2012 Georgia tax dollars to GRACE Scholars. As of December 31, 2012, $155,577.00 in tuition assistance has been designated to Holy Redeemer Catholic School. This amount offers enough funds for 11 new students to attend Holy Redeemer School under the GRACE Scholarship program.

There is a Redeemer, Jesus, God&#39;s own Son, Precious Lamb of God, Messiah, Holy One, Thank you oh My Father, For giving us Your Son, And leaving Your Spirit, &#39;Til the work on Earth is done. Keith Green