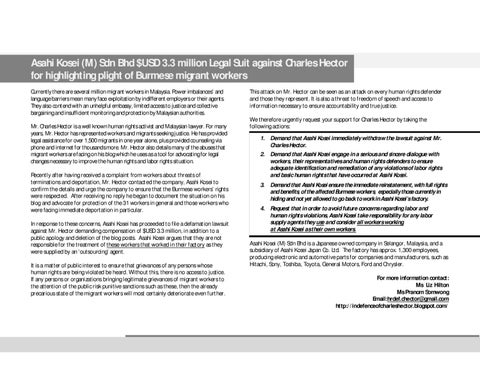 Asahi Kosei (M) Sdn Bhd $USD 3.3 million Legal Suit against Charles Hector for highlighting plight of Burmese migrant workers Currently there are several million migrant workers in Malaysia. Power imbalances’ and language barriers mean many face exploitation by indifferent employers or their agents. They also contend with an unhelpful embassy, limited access to justice and collective bargaining and insufficient monitoring and protection by Malaysian authorities. Mr. Charles Hector is a well known human rights activist and Malaysian lawyer. For many years, Mr. Hector has represented workers and migrants seeking justice. He has provided legal assistance for over 1,500 migrants in one year alone, plus provided counseling via phone and internet for thousands more. Mr. Hector also details many of the abuses that migrant workers are facing on his blog which he uses as a tool for advocating for legal changes necessary to improve the human rights and labor rights situation. Recently after having received a complaint from workers about threats of terminations and deportation, Mr. Hector contacted the company, Asahi Kosei to confirm the details and urge the company to ensure that the Burmese workers’ rights were respected. After receiving no reply he began to document the situation on his blog and advocate for protection of the 31 workers in general and those workers who were facing immediate deportation in particular. In response to these concerns, Asahi Kosei has proceeded to file a defamation lawsuit against Mr. Hector demanding compensation of $USD 3.3 million, in addition to a public apology and deletion of the blog posts. Asahi Kosei argues that they are not responsible for the treatment of these workers that worked in their factory as they were supplied by an ‘outsourcing’ agent. It is a matter of public interest to ensure that grievances of any persons whose human rights are being violated be heard. Without this, there is no access to justice. If any persons or organizations bringing legitimate grievances of migrant workers to the attention of the public risk punitive sanctions such as these, then the already precarious state of the migrant workers will most certainly deteriorate even further.

This attack on Mr. Hector can be seen as an attack on every human rights defender and those they represent. It is also a threat to freedom of speech and access to information necessary to ensure accountability and true justice. We therefore urgently request your support for Charles Hector by taking the following actions: 1. Demand that Asahi Kosei immediately withdraw the lawsuit against Mr. Charles Hector. 2. Demand that Asahi Kosei engage in a serious and sincere dialogue with workers, their representatives and human rights defenders to ensure adequate identification and remediation of any violations of labor rights and basic human rights that have occurred at Asahi Kosei. 3.

Demand that Asahi Kosei ensure the immediate reinstatement, with full rights and benefits, of the affected Burmese workers, especially those currently in hiding and not yet allowed to go back to work in Asahi Kosei’s factory.

4. Request that in order to avoid future concerns regarding labor and human rights violations, Asahi Kosei take responsibility for any labor supply agents they use and consider all workers working at Asahi Kosei as their own workers. Asahi Kosei (M) Sdn Bhd is a Japanese owned company in Selangor, Malaysia, and a subsidiary of Asahi Kosei Japan Co. Ltd. The factory has approx. 1,300 employees, producing electronic and automotive parts for companies and manufacturers, such as Hitachi, Sony, Toshiba, Toyota, General Motors, Ford and Chrysler. For more information contact: Ms Liz Hilton Ms Pranom Somwong Email:hrdef.chector@gmail.com http://indefenceofcharleshector.blogspot.com/ For highlighting information about human rights violations suffered by 31 Burmese Migrant Workers who were working at Asahi Kosei(M) Sdn Bhd...

For highlighting information about human rights violations suffered by 31 Burmese Migrant Workers who were working at Asahi Kosei(M) Sdn Bhd...