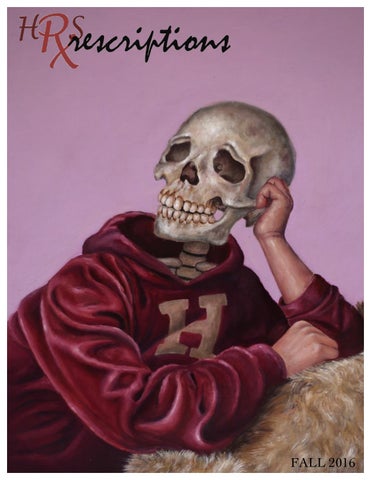 Prescriptions is a semesterly publication that serves as an intersection between the arts and medicine. The publication showcases student reflection on health, medicine, and insight into life as an aspiring doctor. Here, students design, write, and create distinctive pieces while sharing their own thoughts, ideas, and experiences – some relatable, each unique, and all reflective. Ultimately. Prescriptions not only aims to inspire and excite, but also strives to facilitate dialogue to create and nurture a wonderful community. Contact ezhang@college.harvard.edu for information on how to get involved! Copyright © 2016 by Prescriptions. All rights reserved. No part of this publication may be reproduced, distributed, or transmitted in any form or by any means, including photocopying, recording, or other electronic or mechanical methods, without the prior written permission of the publisher.

or exchange  patients  due  to  the  “low  rates   [of  reimbursement]  and  administrative   burdens.”

Healthcare For  All:  With  A   Tiered  Caveat?

This is  very  troubling  for  proponents,   including  myself,  who  see  the  Affordable   Care  Act  as  an  integral  piece  of  legislation   to  the  U.S.  get  on  track  to  guarantee  that  all   people  have  access  to  quality  health   insurance  while  maintaining  a  private   market  system  for  health  insurance.  The   mechanisms  of  insurance  related  to   providing  people  with  health  insurance  are   specifically  expansions  in  the  size  of   medicare  on  a  state  by  state  basis  by  raising   the  eligibility  threshold.  Hence,  this  allows   people  to  obtain  private  insurance  through   exchanges  that  can  be  subsidized.  The  issue   comes  into  place  if  certain  doctors  choose   not  to  accept  these  insurance  plans,  or  only   accept  them  for  certain  procedures  then   patients  may  have  health  insurance  but  it   will  not  provide  with  the  adequate  health   care  these  patients  need.  This  would  create   tiers  of  healthcare  in  which  those  who  have   private  insurance  would  have  access  to  a   much  larger  array  of  services  than  those   who  have  health  insurance  partially  or  fully   subsidized  by  the  government.

As the  system  stands  now,  the  National   Health  Services  Corps  recruits  primary   physicians  who  have  just  finished  medical   school  to  provide  services  in  communities   without  significant  access  to  healthcare  in   exchange  for  student  loan  forgiveness.  This   could  possibly  serve  as  a  vector  through   which  to  treat  patients  who  would  not  fall   in  this  “first”  tier  of  healthcare.  The  main   16

Potentially the  most  concerning   characteristic  of  the  hospital  was  their   overall  lack  of  hygiene.  Understandably,