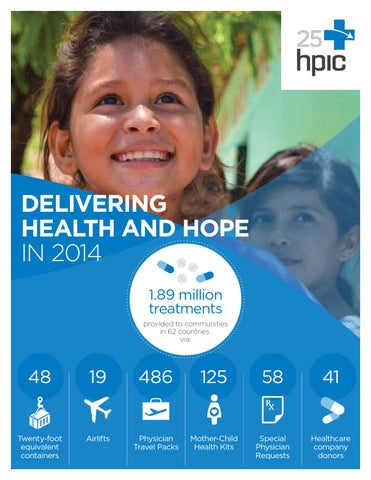 DELIVERING HEALTH AND HOPE IN 2014 1.89 million treatments provided to communities in 62 countries via:

HOW DID WE RESPOND TO WORLDWIDE CRISES IN 2014?

1 Airlift to Liberia with Global Medic

A YEAR OF CRISES In HPIC’s 25-year history, 2014 stands out as a year of crises. We began the year still responding to Typhoon Haiyan in the Philippines, continued helping Syrian refugees access medicine, sent relief to Gaza to help the humanitarian crisis there in the summer and fall, and supported the heroic healthcare workers in West Africa caring for patients struck with Ebola and trying to contain the deadly virus.

SYRIAN REFUGEE CRISIS The number of people fleeing their homes, often leaving behind family members and belongings, rose sharply in 2014. This brought the number of internally displaced persons and refugees to unprecedented levels. The economic, social and human cost

of caring for refugees and the internally displaced is being borne mostly by poor communities, says the United Nations High Commission for Refugees. “Enhanced international solidarity is a must if we want to avoid the risk of more and more vulnerable people being left without proper support."

HPIC was actively responding throughout the year with various partners to this refugee crisis and other emergencies. The Syrian refugee crisis was a major focus of HPIC in 2014. The International Society for Peace and Human Rights (ISPHR), led by Dr. Saren Azer, worked with HPIC to mobilize funds and medicines for refugees in Iraq and Turkey. In total 100 Physician Travel Packs were provided to care for Syrian refugees and a container of medical relief was provided to ANERA in Gaza. In addition, HPIC equipped specialists with specific medicines needed to care for Syrian refugees living with post-traumatic stress disorder, psychosis and neurological issues.

According to the World Health Organization, the average fatality rate

Before Ebola was making global headlines in 2014, HPIC was already working with partners to support the eﬀorts of heroic healthcare workers in West Africa.

of Ebola is around 50 per cent but can reach as high as 90 per cent. With early care and treatment, a patient’s chance of surviving can greatly improve. HPIC began providing medical relief for the region in June with a container of medical supplies, antibiotics, acetaminophen, gowns and gloves to PLAN International in Guinea, ground zero of the epidemic.

In September HPIC provided 26 customized Emergency Physician Travel Packs to GlobalMedic to help frontline workers in Liberia and Sierra Leone care for infected people. These emergency mobile medical kits equipped doctors and nurses with up to 15,000 treatments. In their report to HPIC, GlobalMedic said the PTPs “were well suited for case management for suspected or confirmed Ebola cases. This shipment increased access to medical care for local populations, increased the ability of SDA Cooper Hospital and the Liberian Ministry of Health to manage suspected or confirmed cases of Ebola, and increased incentive for local populations to seek medical assistance when presenting symptoms of Ebola.” In addition HPIC sent 2,500 canisters of powerful disinfectant wipes donated by Virox Technologies to Liberia in October. This donation allowed hospitals to kill the virus on surfaces and prevent further infections. ■

HPIC’s Mother-Child Health Kit Program completed its first full year of operations in 2014. It was developed over a few years and the first kits were delivered in 2013. In 2014, the program ramped up delivering 125 kits to partners in five countries.

More than 300,000 treatments were provided over the five years of HPIC’s Capacity Building and Access to Medicines project in Afghanistan. The project was in partnership with the Afghan Ministry of Public Health and was funded by the the Department of Foreign Aﬀairs, Trade and Development Canada. The overarching objective was to improve the capacity of the national pharmaceutical chain so that more people, especially women and children, could have greater access to medicine.

One of the partners HPIC worked with was the Evangelical Missionary Church of Canada (EMCC). This project’s aim was to establish first response care for pre and postnatal women and infants in the community of Gens de Nantes (GDN) in northeastern Haiti. The concept was to train traditional birth attendants (TBAs) to recognize potential health concerns for both mothers and babies, and to encourage more women to come in to the GDN clinic for pregnancy follow-up, for delivery and for post-natal visits. During those visits mothers and babies received the appropriate care thanks to the availability of the donated medicine, supplies and equipment in the Mother-Child Health kits.

There were two strategies to reach this goal: deliver quality needed medicines to public hospitals in Kabul and increase access to medicine over the long term. Some outcomes included 78% more medicine entering the country was tested for quality control between 2010 and 2014, the central medical stores increased their capacity from 39% to 69%, the country’s medicine stocks were better managed,

In 2013 and 2014 thirty MCH kits were provided benefiting more than 450 mothers and 900 children. Medical supplies in the kits were used to make more than 150 clean deliveries possible. The Mother-Child Health Kits “were very useful,” reported Marilyn McIlroy of the EMCC. “We had confidence that the supplies and pharmacy products were available when we needed them.”

with The Salvation Army

to the Philippines with ADRA

donated medicines in the PTPs conferred to beneficiaries a feeling of being acknowledged and “remembered”.

“Accessing quality medicines contributes to better overall health, improved quality of life, longer life expectancy, and less pressure on the health system,” says Maryanne Mutch, HPIC’s Executive Director of Programs. “This project was successful and appreciated by the hospitals and the Ministry of Public Health. It is a proven approach that we could easily adapt to other countries and communities.”

In some places, many beneficiaries had never seen a doctor or a nurse before and were extremely grateful that “there are people in other parts of the world that care about them and their wellbeing.”

BENEFICIARIES FEEL REMEMBERED A comprehensive review of the Physician Travel Pack program was completed this year in an eﬀort to improve the long-running service to doctors and Canadian medical mission teams. One impact that emerged from the reports was the notion that the

Many partners indicated how the donated medicines positively aﬀected “the quality of life of some patients” and improved beneficiaries' productivity and capability to pursue their daily activities and to care for their families. One partner said “it was striking to see how people’s productivity soared as they became free of disease.” Each Physician Travel Pack contains up to 600 treatments. In 2014, 291,000 treatments were provided to communities in 42 countries. ■

At the end of 2014, HPIC received accreditation from Imagine Canada’s Standards Program. This placed HPIC among a select group of charities in Canada: only 126 out of more than 80,000 were accredited as of November 2014.

Our mission began as an emergency response operation to help after a devastating earthquake in Iran in 1990.

HPIC had to demonstrate excellence in five areas of operations: board governance, financial accountability and transparency, fundraising, staﬀ management, and volunteer involvement. HPIC is committed to maintaining these best practices.

HPIC is celebrating its 25th anniversary in 2015.

Today we work with over 70 healthcare companies in Canada and hundreds of doctors, medical mission teams and NGOs to deliver health and hope to hundreds of communities every year.

HOW WE MANAGE DONATIONS PROGRAMS

Health Partners International of Canada (HPIC) is a relief and development organization that delivers health and hope to the world’s most vulnerable people. We are dedicated to increasing access to medicine and improving health in the developing world without discrimination through the provision of essential medicines & medical supplies, pharmaceutical management and logistics, and capacity-building projects.