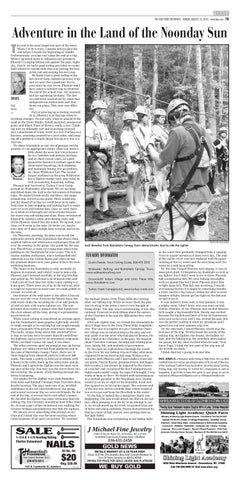 Adventure in the Land of the Noonday Sun T

he end is the most important part of the story. When I write a story, I almost always plan the end before I decide the beginning or middle. Unfortunately, you just canâ&#x20AC;&#x2122;t plan the end of a trip. When I squatted down to silhouette my grandson Phoenixâ&#x20AC;&#x2122;s surging fishing rod against the pale, night sky, I knew we had a good ending provided we could land whatever sizeable fish that was putting the bow in his rod and making his reel sing. We hadnâ&#x20AC;&#x2122;t had a good ending to the last two of these summer getaway trips and we were due a good one. Every year since he was seven, Phoenix and I have taken a summer trip to celebrate the end of the school year, the summer, and his upcoming birthday. The last two had been washed out by rains that SPORTS dampened our enthusiasm and shut down our plans. This year was differDick ent. Jones Part of growing up is testing yourself. â&#x2013; â&#x2013; â&#x2013;  At 13, Phoenix is at that age when everything changes. On our early trips we played in the sand on the Outer Banks, fished, kayaked, prospected gems, and biked. None of these is really a test. Climbing into an inflatable raft and launching yourself into a maelstrom of white water is a test. Putting on a harness, attaching yourself to a steel cable, and jumping off a platform a couple dozen feet up in a tree is a real test. We chose Nantahala as our rite of passage testing ground; itâ&#x20AC;&#x2122;s an appropriate choice when you learn a little about the area thatâ&#x20AC;&#x2122;s best known for its Cherokee and pioneer heritage and, in more recent years, as a playground for daredevil outdoor sports like whitewater kayaking, rock climbing and mountain biking. For an outfitter, we chose Wildwater Ltd. The second largest outfitters in the area, Wildwater has a Zipline canopy tour, jeep rides, as Phoenix well as canoeing, kayaking, rafting. Phoenix and I arrived at Turkey Creek Campground on Wednesday afternoon. We set up camp and hiked down the trail to the tail-waters of Fontana Lake. We make friends easily and Huey, the campground dog, served as our guide. Huey would stay just far ahead of us that we could keep us in sight, from time to time stopping and looking back to make sure we were still behind him. Once we were there, we wished weâ&#x20AC;&#x2122;d brought our swim trunks because the water was refreshing and clear. Huey entertained himself by taking a swim and chasing rocks and sticks Phoenix tossed into the water. We agreed, next time, weâ&#x20AC;&#x2122;ll swim in the lake. Or better yet, maybe next time weâ&#x20AC;&#x2122;ll plan enough time to kayak and swim the lake. On Thursday morning, the plan was to raft the eight-mile stretch of the Nantahala that draws thousands of rafters and whitewater enthusiasts from all over the country to the gorge. Our guide for the trip was Tim McGee, a clean cut young man whoâ&#x20AC;&#x2122;s been guiding on the Nantahala for nine years. Tim is a classic outdoor enthusiast, whoâ&#x20AC;&#x2122;s backpacked and rafted all over the United States and when he has his graduate degree next year, plans to have his own outfitting business. The water of the Nantahala is cold, normally 46 degrees in summer, and I didnâ&#x20AC;&#x2122;t want to take a dip. Phoenix and I listened carefully in the trip briefing and suited up. We both had a lot of kayak time and I had a lot of river time but white water rafting is a team sport. There were six of us in the raft and, after a couple of exercises to make sure we could paddle in unison, we were off. One feature of the cold water is the affect it has on the air over the river. Even on the hottest days, the cold water chills the air along the river and pockets of cold air mix with warm summer air. The temperature also creates a unique mist that hangs over the river almost all the time, giving it a primordial, mysterious air. White water rafting is considered an extreme sport, but the Nantahalaâ&#x20AC;&#x2122;s most popular eight-mile stretch is rough enough to be exciting but not rough enough that a reasonably firm person would have trouble. The really unique thing about this stretch of river is that at no time were we more than 50 yards from the highway and access by an emergency responder. While you didnâ&#x20AC;&#x2122;t notice the road, it was there. The other extreme sport we sampled was zip lining. Ziplines are cables stretched from platforms and in the case of Nantahala Canopy Tours, there are 13 lines ranging from about 50 yards to well over 200 yards. You hook a trolley (a little set of wheels with a hook) to the cable, hook up the safety lines and go. Phoenix and I agreed the Zipline was the most exciting part of the trip. Not only was the travel down the line exciting, the scenery while floating through the forest is amazing. Our guides for the Zipline were Josh Hamsher from Iowa and Randall Coleman from Travelers Rest, South Carolina. The guys took care of us, instilled confidence in the nervous members or our group, and treated everyone like we were old friends. By the end of the trip, everyone knew each otherâ&#x20AC;&#x2122;s names. We decided the Zipline was more strenuous than the rafting trip, but certainly something most folks could do. At least a part of the excitement was walking the creative bridges and platforms that link the ziplines. We always cover something educational on our trips and I think this was the most exciting educational segment of our past excursions. We watched

Josh Hamsher from Nantahala Canopy Tours demonstrates how to ride the zipline.

the outdoor drama, Unto These Hills the evening after our rafting trip. While we were tired, the play was riveting to the point, I never even thought of being sleepy. Not only was it entertaining, it was educational. I learned several things about the nature of the Cherokee tribe and the difficulties they went through. After our zipline tour, we visited the Oconolufte Indian Village next to the Unto These Hills Amphitheater. The tour of a replica of a pre-Columbus Cherokee village was as entertaining as the play and our tour guide was the actor who had played Seneca, the War Chief of the Cherokee, in the play. We learned about Cherokee customs, farming and trading practices, family life, and methods of government. By the time we walked down through the woods to the river for our fishing trip on Friday afternoon, I figured Iâ&#x20AC;&#x2122;d be too tired to fish long. Within a few minutes, both Phoenix and I had caught a trout and our guide, Dustin Raxter, promised more and bigger fish to come. I can always be tempted by the chance of a big fish and, in spite of the fact Iâ&#x20AC;&#x2122;d forgotten my lighter and couldnâ&#x20AC;&#x2122;t enjoy the cigar Iâ&#x20AC;&#x2122;d brought, I was ready to hang in there. We fished with spinning gear in a method peculiar to the Nantahala area. Dustin would tie on six or eight or his beautiful, hand tied flies spaced six to ten inches apart. The extreme end of the line was tied to a bubble float which would allow us to cast and keep the flies high in the water. To the fish, it looked like a miniature hatch was happening. The fish would attack the flies on the surface, often jumping over the fly in an attempt to eat it. As we advanced up the river, we picked trout out of holes and along cutbanks. Dustin had promised he find us a limit of fish, and we were getting close as the light faded. The Nantahala was enchanting in the fading light

GOLD NEWS METALS MARKET AT A 35 YEAR HIGH Clean Out The Old Jewelry Box And Convert Broken Or Out Of Style Jewelry to $DOLLARS$ PAYING TOP PRICE FOR GOLD, SILVER AND PLATINUM

as the water flow gradually changed from a surging river to a quiet stream as it does every day. The roar of the earlier river was now replaced with the quiet tinkling of the icy water and the mist hung over the water in a cold layer of fog. By the time I heard Phoenix reel singing, it was almost pitch dark. Iâ&#x20AC;&#x2122;d forgotten my flashlight as well as my lighter, but I didnâ&#x20AC;&#x2122;t need to see to know Phoenix had a substantial fish. We were fishing ultralights with six pound line but I knew Phoenix knew how to fight large fish. This fish was so strong, I considered asking Dustin if it might be something besides a trout, maybe a big carp or catfish but after several minutes of fight, Dustin got his light on the fish and we got to see it. It was indeed a trout, and, at four pounds, it was a trophy trout. I donâ&#x20AC;&#x2122;t know who was most excited, Dustin, Phoenix, or me. Phoenix was excited because heâ&#x20AC;&#x2122;d caught a big beautiful fish, Dustin was excited because the big fish and limit of trout heâ&#x20AC;&#x2122;d promised were now in the creel, and I was excited because this was the perfect ending to what my grandson and I agreed was our best summer trip ever. On the ride back, I asked Phoenix which was the best part of the trip. We discussed the merits of the rafting trip, the Zipline, the drama, the Indian village, and the fishing trip. My grandson often makes me proud, but my chest swelled when he said, â&#x20AC;&#x153;You know Papa, I think the best part of the trip was all the friends we made.â&#x20AC;? I think that boyâ&#x20AC;&#x2122;s going to do just fine. DICK JONES IS a freelance writer living in High Point. Heâ&#x20AC;&#x2122;s an NRA Certified Instructor and an upcoming member of the board of directors of the Southeast Outdoor Press Association. He writes about hunting, fishing, dogs, and shooting for several N.C. newspapers as well as magazines. If youâ&#x20AC;&#x2122;d like to have him speak to your group, he can be reached at offtheporch52@yahoo.com or offtheporchmedia.com 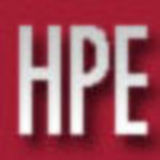