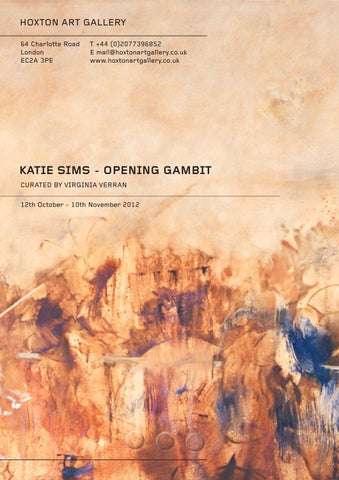 Hoxton Art Gallery are pleased to announce Katie Sims’ first solo exhibition in London, curated by artist Virginia Verran. Sims is a British artist who graduated from University College Falmouth in 2010. At a young age the artist has been heralded by critics and curators in Britain and has won numerous prizes including the prestigious Richard Ford Award and the Midas Award. In January this year curator Pryle Berhman described Sims as ‘one to watch’ from Britain’s new generation of artists (The Independent). Although this is her first solo show in London, Sims’ work has been celebrated with two solo shows in the UK. Sims is known for paying homage to masters from the early Renaissance and Baroque periods. A running theme in her practice is the subversion of classical and mythological constructs found within the paintings of masters such as Mantegna and Poussin. The artist’s use of geometric motifs is often seen to replace that of a reclining nude or a group of figures found within traditional classical paintings and her signature brush work is known for its organic and ethereal quality. Among the artworks in the show will be a large scale oil painting inspired by Uccello’s Battle of San Romano in the National Gallery’s collection, London, and a variety of works influenced by pieces in the Museo del Prado, Madrid, where the artist recently completed a residency. Virginia Verran is an artist living and working in London. She has exhibited widely in Britain and internationally including at the Henie-Onsad Kunstsenter, Norway, Frueshorge Contemporary Drawings, Berlin, Newlyn Gallery, Cornwall, and Transition Gallery, London. In 2010 she won the grand Jerwood Drawing Prize. She teaches at Chelsea College of Art and Design and University College Falmouth.

KATIE SIMS ‘The paintings of Katie Sims pay homage to masterpieces by Mantegna and Poussin, but deconstruct their studied, graceful air through the organic fluidity of her brushwork and the incongruous addition of geometric shapes that further undermine the compositional structure of her source images.’ - Pryle Berhman, ‘How to spot the next Damien Hirst’, The

A discussion between the Head of Hoxton Art Gallery, Lydia Cowpertwait, and Katie Sims

LC - Congratulations on your solo show at Hoxton Art Gallery. Since graduating from University College Falmouth what has been your best experience as a young artist? KS - I consider myself to be so fortunate with the opportunities that have arisen since graduating. Each have been individually important in my development as an artist and in learning how to navigate the art world, however, if I had to highlight one experience it is being selected for Channel 4/Saatchi New Sensations Competition immediately upon graduating. The Prize is open to all art students completing BA and MA courses in the UK and each year, twenty shortlisted graduates are chosen to present their work in an exhibition in London in October during Frieze Week. Having studied in Falmouth and lived and worked in Shropshire, New Sensations gave me the crucial exposure necessary to maintain the practice and reach larger audiences. Consequently, people started approaching me to work with them, which has led to many exciting exhibiting opportunities initiating relationships with curators and collectors.

LC - Although this is your first solo show in London you have had one other solo show in the UK. Can you tell us about it? KS - Transpose was the title of my first solo show, held at Millennium Gallery in St Ives, in October 2011. It was the prize for winning The Midas Award in 2010, an initiative between Midas Construction, Newlyn Art Gallery, Millennium and University College Falmouth designed to help emerging artists enter the professional art world after graduating. The show demonstrated how my painting practice had evolved since the Degree show. Furthermore, it remains a poignant moment in my career because it marked my return to Cornwall one year on and an opportunity to see many familiar and supportive faces.

LC - Your work tends to play with the theme of subversion. Quite often you reference the works of old masters, which you then subvert with your own style, using geometric motifs for

example. Can you explain where this idea came from? KS - I have always felt that contrasts are where interest lies. When you present two opposites or contrasting voices together on a painted support you are forcing discordant languages into dialogue. They serve to enhance each otherâ&amp;#x20AC;&amp;#x2122;s qualities. The intricate forms that disrupt my paintings surface I describe as fragments; they derive from my sustained interest in the observed world, typically overlooked objects that are often in a state of flux and instability. How I rationalise these reflections involve an engagement with process and materiality. It is important for me to achieve distance from the context of the image and to look at it in terms of how its component shapes can be applied. I reconfigure isolated sections by means of collage and drawing before seeing how they can inform the paintings. These strategies subject the image to a process of estrangement and reinterpretation. Simultaneously, they appear both strange and familiar.

LC - Do you feel your new works in the exhibition demonstrate a new direction in your practice? KS - Much of my recent work comes from a collection of drawings I made in the Prado upon receipt of the Richard Ford Award. The time I spent studying the collection proved to be an extremely formative period for reconsidering my practice. I became engrossed by the sense of unease found in certain works by Ribera, Goya and Velazquez and on my return I made a series of liberating studies informed by the energy and movement in these works, some of which are presented in this exhibition. I think the show demonstrates how the work is trying to be less polite and more poignant. I am also presenting paintings which deal with the figure â&amp;#x20AC;&amp;#x201C; something until now, that has been absent in my work. I feel I am thinking a lot more about the composition in my pieces and the possibilities with framing, isolating and editing parts of the original reference point. This feels a lot more exciting.

The show also presents my first large scale painting referencing The Battle of San Romano (1438-40) by Paolo Uccello, housed in the National Gallery, London. Painting at this scale challenged my handling of the medium and also made me conscious of how I needed to make

my paintings work on both a macro and micro scale. I can now see my work developing in terms of scale.

LC - The title of your show is Opening Gambit. What does this reference? KS - The title Opening Gambit originally came from a painting I made a year ago. This is my first solo show in London, my ‘opening move’ so to speak. I often think about the manner I work in in relation to chess; you start with the opening move and end in a series of smaller moves which have significant consequences. The act of painting is fraught with risk because you have to sacrifice what you had before in order to potentially achieve something greater. So the title seemed appropriate in many ways for this reason.

LC - What would you like to achieve in the future as an artist? Do you have any goals at large? KS - I’d be interested in pursuing more residences as I think these are tremendously valuable in forging new contacts and relationships with people and in seeing how a change in your working environment can impact upon your practice. Should the opportunity arise, I would love to exhibit outside of the UK and begin to build an international profile.

LC - What advice would you give young artists who are about to graduate or have just graduated from art school? KS - You have to be incredibly proactive and motivated. It’s all about whom you know, being in the right place at the right time and reacting to it. Everything you put yourself up for, do it to the best of your ability because people that you work with will remember you for it. It’s important to nurture the contacts you make because you never know where these might lead in the future. Be prepared for rejection, it’s all too common in the art world; you need to dust yourself off and stay motivated. When you graduate, don’t put yourself under pressure to better your Degree show work immediately. Perhaps most important of all though - don’t stop making. If you do, it becomes a difficult barrier to overcome.