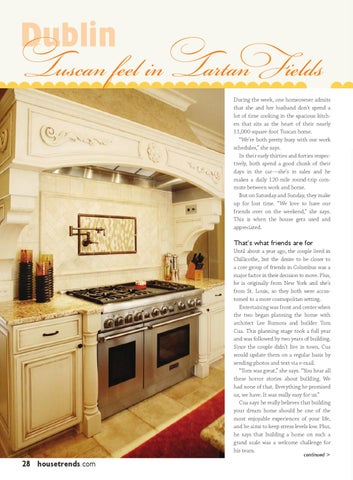 During the week, one homeowner admits that she and her husband don’t spend a lot of time cooking in the spacious kitchen that sits as the heart of their nearly 11,000-square-foot Tuscan home. “We’re both pretty busy with our work schedules,” she says. In their early thirties and forties respectively, both spend a good chunk of their days in the car—she’s in sales and he makes a daily 120-mile round-trip commute between work and home. But on Saturday and Sunday, they make up for lost time. “We love to have our friends over on the weekend,” she says. This is when the house gets used and appreciated.

That’s what friends are for Until about a year ago, the couple lived in Chillicothe, but the desire to be closer to a core group of friends in Columbus was a major factor in their decision to move. Plus, he is originally from New York and she’s from St. Louis, so they both were accustomed to a more cosmopolitan setting. Entertaining was front and center when the two began planning the home with architect Lee Rumora and builder Tom Cua. This planning stage took a full year and was followed by two years of building. Since the couple didn’t live in town, Cua would update them on a regular basis by sending photos and text via e-mail. “Tom was great,” she says. “You hear all these horror stories about building. We had none of that. Everything he promised us, we have. It was really easy for us.” Cua says he really believes that building your dream home should be one of the most enjoyable experiences of your life, and he aims to keep stress levels low. Plus, he says that building a home on such a grand scale was a welcome challenge for his team. continued &gt; 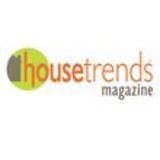