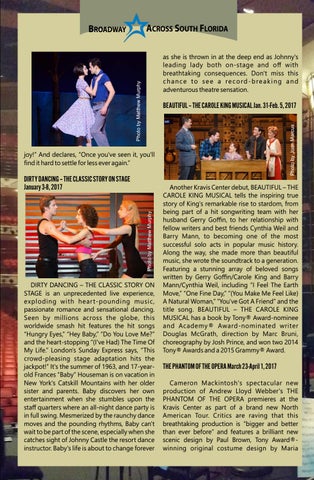 ACROSS SOUTH FLORIDA as she is thrown in at the deep end as Johnny's leading lady both on-stage and oﬀ with breathtaking consequences. Don't miss this chance to see a record-breaking and adventurous theatre sensation.

joy!” And declares, “Once you've seen it, you'll ﬁnd it hard to settle for less ever again.”

DIRTY DANCING – THE CLASSIC STORY ON STAGE is an unprecedented live experience, exploding with hear t-pounding music, passionate romance and sensational dancing. Seen by millions across the globe, this worldwide smash hit features the hit songs “Hungry Eyes,” “Hey Baby,” “Do You Love Me?” and the heart-stopping “(I've Had) The Time Of My Life.” London's Sunday Express says, “This crowd-pleasing stage adaptation hits the jackpot!” It's the summer of 1963, and 17-yearold Frances “Baby” Houseman is on vacation in New York's Catskill Mountains with her older sister and parents. Baby discovers her own entertainment when she stumbles upon the staﬀ quarters where an all-night dance party is in full swing. Mesmerized by the raunchy dance moves and the pounding rhythms, Baby can't wait to be part of the scene, especially when she catches sight of Johnny Castle the resort dance instructor. Baby's life is about to change forever

Another Kravis Center debut, BEAUTIFUL – THE CAROLE KING MUSICAL tells the inspiring true story of King's remarkable rise to stardom, from being part of a hit songwriting team with her husband Gerry Goﬃn, to her relationship with fellow writers and best friends Cynthia Weil and Barry Mann, to becoming one of the most successful solo acts in popular music history. Along the way, she made more than beautiful music, she wrote the soundtrack to a generation. Featuring a stunning array of beloved songs written by Gerry Goﬃn/Carole King and Barry Mann/Cynthia Weil, including “I Feel The Earth Move,” “One Fine Day,” “(You Make Me Feel Like) A Natural Woman,” “You've Got A Friend” and the title song. BEAUTIFUL – THE CAROLE KING MUSICAL has a book by Tony® Award-nominee and Academy® Award-nominated writer Douglas McGrath, direction by Marc Bruni, choreography by Josh Prince, and won two 2014 Tony® Awards and a 2015 Grammy® Award.

THE PHANTOM OF THE OPERA March 23-April 1, 2017 Cameron Mackintosh's spectacular new production of Andrew Lloyd Webber's THE PHANTOM OF THE OPERA premieres at the Kravis Center as part of a brand new North American Tour. Critics are raving that this breathtaking production is “bigger and better than ever before” and features a brilliant new scenic design by Paul Brown, Tony Award®winning original costume design by Maria