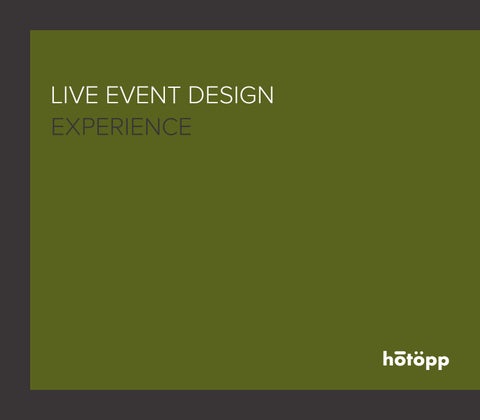 Hotopp Associates was founded in 1984 by Michael J. Hotopp, whose award-winning career in entertainment design spans more than 30-years. Since our inception, the company’s principal philosophy has been to create environments, events, and attractions that are visually distinctive, technically innovative, user-friendly, and memorable. Hotopp Associates has television design credits that include all major network and cable broadcast outlets (5 Emmy nominations, 3 wins). Corporate presentations include Fortune 500 companies in the areas of automotive, pharmaceutical, and technology. Entertainment design credits include Broadway, Off Broadway, national and international touring companies, Radio City Music Hall’s Christmas Spectacular, Las Vegas, and Shoji Entertainment in Branson, MO. Current exhibit credits include Diana: A Celebration, The Basketball Hall of Fame, and Gaylord Entertainments “Ice!” in Nashville, Texas, and Orlando. For each project, the company’s dynamic group of concept designers, art directors, graphic designers, sketch artists and fabricators work in a constant, close partnership with clients to help them achieve and surpass all expectations.

Hotopp Associates in partnership with IMG designed the opening and closing ceremonies for the 2012 Ryder Cup. The Ryder Cup is a biennial menâ&#x20AC;&#x2122;s golf competition between teams from Europe and the United States. The 39th Ryder Cup was held September 28â&#x20AC;&#x201C;30, 2012, at the Medinah Country Club in Medinah, Illinois,

U.S. 240,000 - The number of people who rolled through the Medinah gates between the first day of practice rounds on Tuesday and the final pairings on Sunday. 6,000,000 - US television viewers for final days broadcast.

Hotopp Associates provided a fun, dynamic, and pet centric environment for Nickelodeon’s First Annual Worldwide Fido Awards. The Fido Awards was a game show featuring pets from around the world. A few lucky dogs were presented with awards in various categories such as: “Cutest Dog,” “Best Dressed,” “Best Voice,” and “Most Outrageous.” Contestants uploaded videos of themselves onto a website, and viewers

picked the finalists in the 2 night special.

Hotopp Associates created a one of a kind over the top hokey themed atmosphere for the NHL All-star Fantasy Draft. Each year the NHL broadcasts their version of a draft where captains pick players akin to a schoolyard pick-up-game. Only this version is about picking sides for the All Star game. Our concept for the show livened it up with a backstage lounge, complete with plenty of Molson, where players could hang out on

camera and await their pick. On stage captains and their managers commiserate about their picks as one by one they each fill their side of the bleachers with team mates. Each player is announced before a victory walk on stage beneath the giant puck arches baring their name in lights.

Hotopp Associates designed the opening ceremony for the 2002 Paralympic Winter Games in Salt Lake City Utah. Opening Ceremony at Rice-Eccles Olympic Stadium to a sold-out audience of 46,000. Hotopp Associates looked to both The Games theme - “Awaken the mind, free the body, inspire the spirit” - and the spectacular

natural surroundings for creative inspiration. About 1,100 athletes and team officials from 35 countries participated in 26 events in three sports — downhill, cross-country and hockey.

Hotopp Associates in partnership with IMG Productions designed and produced the 2015 NHL Winter Classic in a sold out Nationals Stadium. The game, the seventh Winter Classic, matched the Chicago Blackhawks against the Washington Capitals. The game garnered an attendance of 42,832, and was televised

nationally in the United States on NBC and in Canada on CBC. Hotopp designed all on-field elements, graphics, and a replica US Capitol Building carved from ice. The overall design concept was based on the Washington mall and Washington D.C. urban plan.

Hotopp Associates in partnership with IMG Productions designed the Super Bowl 48 kickoff spectacular. Area football fans and visitors to New York and New Jersey had the unique opportunity to welcome Super Bowl XLVIII to the region with the first ever “Super Bowl Kickoff Spectacular,” a free, ticketed event featuring

performances by Daughtry and Goo Goo Dolls. For the first ever Super Bowl Kickoff event, Hotopp Associates designed a stage to serve as the official launch to the week long party leading up to Super Bowl XLVIII.