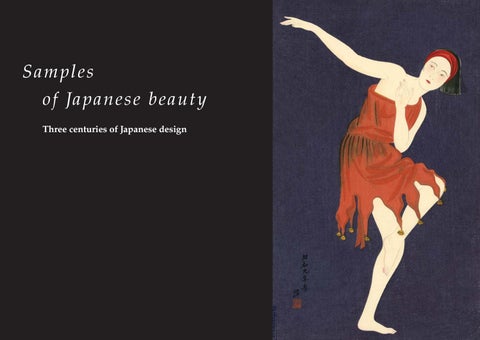 Two courtesans and a young apprentice, no. 4 from an

untitled series, with poem above.

Shizuka Gozen and Minamoto Yoshistune with his

retainer SatĂ´ Tadanobu dancing, in an act from Yoshitsune

several series in the aiban format around this time.

A double portrait showing the actors Ichikawa OmezĂ´ I as

View of a sudden rainstorm.

A woman holding a cat.

Asahina and Matsumoto Yonesaburo I as the courtesan

Very good impression, colour and condition. The poem on the fan

on the floor is written by the actor Ichikawa Danjuro VII.

Woman gossiping near a praying monk, from the series

series of actors with their poems.

Hanamado of the Ă&amp;#x201D;gi house on the right, in the middle

Tokiwazu of the Ebi house and Matsumura from the

Matsuba house on the left.

garden, with a poem by Hanamichi no Tsurane (penname

gosan no kiri (The golden gate and the paulownia crest), which was

performed at the Nakamura Theatre in the third month of 1826.

The poem written by Seki SanjĂťrĂ´ II is signed by his poet name Kazan. Twelve designs are currently known from this series.

Kegon waterfall, view of one of the three falls, from the

Matsumoto KĂ´shirĂ´ V as Ishikawa Goemon, from an

untitled series of actors with their poems.

The poem is by Matsumoto Kôshirô V himself signed Shûyatei

A long time ago the Dutch already were very skilled in navigation,

Kinshô. This particular design is known in two editions with

and Dutch ships sailed around the world. The Dutch are very

either brown or green borders at the end of his kimono sleeves.

Published by Matsuki Heikichi in March of 1881.

foreign markets. They chose good materials and worked like

when building up stone walls; they used iron nails and filled up

The text in lower left reads: ’Six p.m. in mid-January’.

cracks with tar and hemp.

An extremely rare design. Sketches made along the Tôkaidô by

In the fourth month they sailed from their country (from

Kiyochika have been preserved. The location, near Shizuoka is

The actor Bando Yasosuke I as Hige no Ikyu, from the

Indonesia, the journey from Indonesia lasted much longer) and in

known for its Abekawa-mochi, a dumpling made of sweet rice.

deluxe series of (large head portraits) produced during the

the sixth month they arrived here. When (the ship arrives) in

final years of his life.

Nagasaki and the cannons, which are placed side by side, are

fired, clouds appear and make the ship invisible. When the smoke

Published by Ebisuya Shoshichi (Kinshodo) in 7/1863.

has risen, the sails that had been visible in large numbers

Fine impression, colour and condition, with incredible printing of

suddenly appear to have been rolled up. Upon departure they

Published by Matsuki Heikichi on January 20, 1881.

his grey hairs. Laid down.

also fire cannons, and before the smoke has disappeared they

have already hoisted the sails, astonishing the spectators.

Their maneuvering is truly miraculously fast and mysterious.

Koganei in Musashi Province, from the series Thirty-six

Mount Fuji at sunset on the lake in Suruga province.

Published by Tsutaya Kichizô in 1858.

Looking suitable: the appearance of a brothel geisha of the Koka

Mokubo temple and vegetable fields by the Uchi river, from the

era, from the series Thirty-two aspects of customs and manners.

A triptych titled A picture of prosperity: America.

Very good impression, colour and condition. Early printing of a

Published by Yamashiroya Jinbei in 1861.

A view of an imaginary square in America. Hiroshige II based his

geisha in the Tempo era, from the series Thirty-two aspects of

Illustrated London News of the Fredericksburg castle near

Published by Tsunashima Kamekichi in 1888.

Fukami Jikyu, from the series One hundred aspects of the moon.

TennĂ´ temple in Osaka, from the series Souvenirs of travel,

Published in 1887 by Akiyama Buemon.

Published by Watanabe ShĂ´zaburĂ´ in 1934.

Published by Watanabe ShĂ´zaburĂ´ in 1927.

Fukami Jikyu was a flamboyant otokodate, a kind of cross between

Songoku, Jade rabbit, from the series One hundred aspects of

Suhara in Kiso, from the series Selection of scenes of Japan.

Published by Watanabe ShĂ´zaburĂ´ in 1925.

Nails, from the series Second series of modern beauties.

Published by Watanabe ShĂ´zaburĂ´ in 1936.

Published by Watanabe ShĂ´zaburĂ´ in 1916.

Published by Watanabe ShĂ´zaburĂ´ in December 1931.

Kiyomizu temple in Kyoto at night.

Published by Watanabe ShĂ´zaburĂ´ in 1916.

Woman in summer kimono in Beppu.

Lingering snow at Inokashira, from the series Twelve scenes of

Tsukiji, from the series New views of Tokyo.

Published by Watanabe ShĂ´zaburĂ´ in spring of 1920.

Published by Watanabe ShĂ´zaburĂ´ in November 1933.

Published by Watanabe ShĂ´zaburĂ´ in 1936. Fine impression, colour and condition.

scenes of amorous play and an introductory landscape

Published by Watanabe Shôzaburô in 1928.

Ichikawa Chûsha as Takeuchi Mitsuhide, from the series A

Published by Watanabe Shôzaburô after 1926.

Mixed technique of gold and silver lacquer, and mother-

of-pearl inlay. With seal reading Meihô in the right bottom

Great egret in flight, reeds below.

Published by Watanabe Shôzaburô in c. 1930.

the play The subscription list. This unique diptych was

Black lacquer suzuribako. Decorated on the left side by a

On the right a poem by the actor reading:

golden band with stylized scrolling waves motive, next to

Seeing clearly, Spring mist, The dance of the sleeves.

it a stylized band of flowers. Inside decoration of stylized

bamboo stalks with silver and golden leaves, and leaves

Signed on reverse on a label attached to the back.

In excellent condition, with hand written separate label with

With original box, signed inside ’Made by Kyoto lacquerer

Kamisaka Yukichi is a lacquer artist, the younger brother of the

famous painter Kamisaka Sekka. Yukichi was a pupil of Tomita

Kichi. Both Yukichi and his brother Sekka have been heavily

Laid down on cardboard with written title, pencil signed in the

inspired by the Rimpa style. Some of its characteristics are

abundant usage of gold and silver, flowing lines and the delicate,

of the lid and stylized waves in gold on the side. 7 cm (h).

With original box. On the box is written from right to left:

refers to the pattern of the natsume connecting from the

body of the natsume onto the lid. Signed by the artist,

Murata SĂ´kaku was born in 1953 in Ishikawa prefecture, Yamanaka.

With original box, on the lid is written shakunage

Real name: Yoshinobu. After high school was taught the art of

(rhododendron). Inside of lid is signed by the artist, with

lacquerware by his father. Started working independently in 1980.

of the lid has been signed with a monogram by the artist.

decorated with stylized willow tree in gold and gold-

Since the early Edo period the IppyĂ´sai noble family has

golden autumn grass (musashino) on the lid and sides, and

centuries and generations they produce high quality products that adhere to the strict traditional rules.

the sides and interior of the kĂ´gĂ´.

autumn grasses. The interior is of black lacquer, decorated

with gold autumn grass. The inkstone (suzuri) represents a

full moon. This is the classic Edo Musashino theme. The

incense container). Signed with seal by the artist in the

A beautiful wooden tea container made from hard tropical

wood variety with an intricate wood grain pattern. With

With original box. On the lid it is written aki no hana, maki-e

and Tsuru saku (made by Tsuru).

Tsuruta Shinsai (also known as WasaburĂ´ II) was born in

Kanazawa and is a graduate from the private

elephant. The ZĂ´hiko company is specialized in high-

quality lacquerware, with the origins of the shop going back as far as 1661. ZĂ´hikoâ&amp;#x20AC;&amp;#x2122;s lacquerware is characterized

by its refined design, while also being of a robust nature.

Flat surfaces, sharp corners and a delicate finish are the

(mother-of-pearl). Inside rim decorated with stylized

With seal reading Kankei on bottom.

the war, he returned to Tokyo to assume the position

of president of the Ceramic Research Center, and

exhibited at the government-sponsored Nitten. He

received the Emperor’s Award (Onshi-sho) at the 10th

without the use of any glaze. The bowl’s shape suggests

signed Takamura Seisei with seal. Bottom of hare signed by

Japan Art Academy Exhibition on May 27th, 1954 and

Wooden sculpture of a reclining hare on a pedestal.

Open ceramic bowl decorated with a landscape by Imao

With original box signed: ‘made by Ikeno Shunpô’.

Made with the nerikomi hagiawase hammer technique. With

Miura Chikusen I was an established ceramist in Kyoto as a

stretched and hammered. The process is repeated several

supplier of tea wares. He was specialized in Kiyomizu-yaki and

times to create the base material. Alloys used are: bars of

A stylized sculpture of a standing heron on a pedestal in

metallic arsenic) and shibu-ichi (an alloy of silver and

Few scratches on the pedestal.

Gojôzaka pottery district. He was also an accomplished painter,

poet and calligrapher who was active in literati circles. He often

Ceramic model of a mandarin duck.

collaborated with friends such as Imao Keinen to produce pieces.

an established metalsmith in Kyoto, and he encouraged him to

The fifth generation still produces pottery in his kiln to this day.

study engraving of metal. His apprenticeship started in 1977 and

Born in Fukui Prefecture, Numata Ichiga studied at the Tokyo

Imao Keinen was born in Kyoto. He studied painting under

in 1990 Tsuibu established his own studio where he also teaches

School of Fine Art under Takeuchi Kyüichi. In 1903, at the age of

30, he was invited to enter the Sevres National (Porcelain) Factory

in France. In 1905, he studied bronze sculpture under Rodin. He

Kyoto Prefectural School of Painting. He frequently showed his

work at exhibitions and often won prizes in Japan and abroad. He

Tokyo School of Fine Arts. In 1910, he was awarded a Fine Art

was also an important figure in Kyoto art and literati circles. He

Award from the French government. In 1921, he returned to the

was specialized in flowers, birds and landscapes.

Takuya Murata born in 1982 in Kyoto, graduated from Kyoto Saga College of art Department of Painting in 2003. The following year

Sevres National (Porcelain) Factory and in 1927, he received

another medal from the French government. In 1933,

he graduated from Kyoto School for Ceramic Arts, Training

Ichiga retired from the Tokyo School of Fine Arts. In

1937, he lectured at the Kyoto Craft Art High School

and worked part-time at the Porcelain Examination

Boymans van Beuningen, Rotterdam and the Chazen Museum, in

Crafts rookie exhibition and the Kyoto Crafts Biennale. In 2011 he

Center of the Department of Commerce and Industry.

was awarded in the Japan Traditional Craft Exhibition.

Keita Matsunaga, born in 1986, Gifu currently works and lives in

Kanazawa. In 2010 he graduated from Meijo University, Aichi, BA

Architecture. In 2013 he graduated from the Tajimi City Pottery De-

sign and Technical Center in Gifu with a BA Ceramics. In 2016 he

once more followed a BA in Ceramics at the Kanazawa Utatsuyama Kogei Kobo in Ishikawa. Matsunaga has exhibited his work in many

solo and group exhibitions all over Japan. With his ceramics he has

won many awards, such as the Grand Prix in Toyama in 2013, at the

Craft competition in Takaoka, and many others. Matsunaga is in-

Inaba was born in Yokohama city, graduated at the design section of

and listening to his primitive senses. Similarly to Takahashi, he

Design Institute in 2001. Currently she works in Otsu, Shiga prefec-

Void, 2017. Ceramic object in the shape of a kaori-shell. 41cm (w) x 24 cm (d) x 25cm (h). This work is the product of the co-operation of the two artists whereby Takahashi YĹŤma provided a lacquer surface finish to the ceramic object by Matsunaga Keita. The technique used for the lacquer surface finish is called kawari nuri. This technique originates from the Edo period, when samurai used it to decorate the scabbard of their swords. That is why the technique is also called saya nuri (scabbard polish-

ing). In modern times this lacquer technique is used to leave patterns and structures on objects. The technique enables the

usages of many different and vibrant colours.

Published by Sakai and Kawaguchi in June 1929.

All prices in Euro,

Inside back cover Torii Kotondo 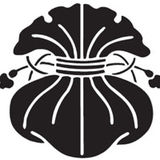