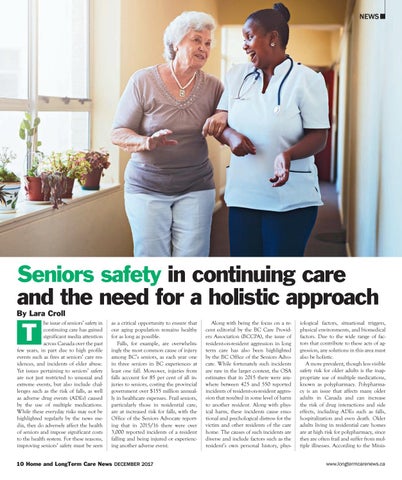 Seniors safety in continuing care and the need for a holistic approach By Lara Croll he issue of seniors’ safety in continuing care has gained significant media attention across Canada over the past few years, in part due to high profile events such as fires at seniors’ care residences, and incidents of elder abuse. Yet issues pertaining to seniors’ safety are not just restricted to unusual and extreme events, but also include challenges such as the risk of falls, as well as adverse drug events (ADEs) caused by the use of multiple medications. While these everyday risks may not be highlighted regularly by the news media, they do adversely affect the health of seniors and impose significant costs to the health system. For these reasons, improving seniors’ safety must be seen

as a critical opportunity to ensure that our aging population remains healthy for as long as possible. Falls, for example, are overwhelmingly the most common cause of injury among BC’s seniors, as each year one in three seniors in BC experiences at least one fall. Moreover, injuries from falls account for 85 per cent of all injuries to seniors, costing the provincial government over $155 million annually in healthcare expenses. Frail seniors, particularly those in residential care, are at increased risk for falls, with the Office of the Seniors Advocate reporting that in 2015/16 there were over 3,000 reported incidents of a resident falling and being injured or experiencing another adverse event.

Along with being the focus on a recent editorial by the BC Care Providers Association (BCCPA), the issue of resident-on-resident aggression in long term care has also been highlighted by the BC Office of the Seniors Advocate. While fortunately such incidents are rare in the larger context, the OSA estimates that in 2015 there were anywhere between 425 and 550 reported incidents of resident-on-resident aggression that resulted in some level of harm to another resident. Along with physical harm, these incidents cause emotional and psychological distress for the victim and other residents of the care home. The causes of such incidents are diverse and include factors such as the resident’s own personal history, phys-

iological factors, situational triggers, physical environments, and biomedical factors. Due to the wide range of factors that contribute to these acts of aggression, any solutions in this area must also be holistic. A more prevalent, though less visible safety risk for older adults is the inappropriate use of multiple medications, known as polypharmacy. Polypharmacy is an issue that affects many older adults in Canada and can increase the risk of drug interactions and side effects, including ADEs such as falls, hospitalization and even death. Older adults living in residential care homes are at high risk for polypharmacy, since they are often frail and suffer from multiple illnesses. According to the Miniswww.longtermcarenews.ca 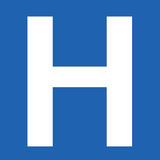