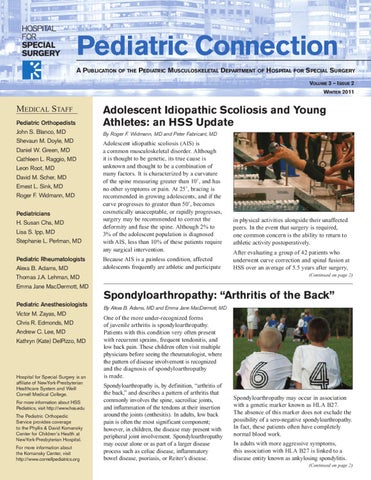 Adolescent idiopathic scoliosis (AIS) is a common musculoskeletal disorder. Although it is thought to be genetic, its true cause is unknown and thought to be a combination of many factors. It is characterized by a curvature of the spine measuring greater than 10˚, and has no other symptoms or pain. At 25˚, bracing is recommended in growing adolescents, and if the curve progresses to greater than 50˚, becomes cosmetically unacceptable, or rapidly progresses, surgery may be recommended to correct the deformity and fuse the spine. Although 2% to 3% of the adolescent population is diagnosed with AIS, less than 10% of these patients require any surgical intervention. Because AIS is a painless condition, affected adolescents frequently are athletic and participate

in physical activities alongside their unaffected peers. In the event that surgery is required, one common concern is the ability to return to athletic activity postoperatively. After evaluating a group of 42 patients who underwent curve correction and spinal fusion at HSS over an average of 5.5 years after surgery, (Continued on page 2)

By Alexa B. Adams, MD and Emma Jane MacDermott, MD

One of the more under-recognized forms of juvenile arthritis is spondyloarthropathy. Patients with this condition very often present with recurrent sprains, frequent tendonitis, and low back pain. These children often visit multiple physicians before seeing the rheumatologist, where the pattern of disease involvement is recognized and the diagnosis of spondyloarthropathy is made. Spondyloarthropathy is, by definition, “arthritis of the back,” and describes a pattern of arthritis that commonly involves the spine, sacroiliac joints, and inflammation of the tendons at their insertion around the joints (enthesitis). In adults, low back pain is often the most significant component; however, in children, the disease may present with peripheral joint involvement. Spondyloarthropathy may occur alone or as part of a larger disease process such as celiac disease, inflammatory bowel disease, psoriasis, or Reiter’s disease.

Spondyloarthropathy may occur in association with a genetic marker known as HLA B27. The absence of this marker does not exclude the possibility of a sero-negative spondyloarthropathy. In fact, these patients often have completely normal blood work. In adults with more aggressive symptoms, this association with HLA B27 is linked to a disease entity known as ankylosing spondylitis. (Continued on page 2)

Pediatric Nursing at HSS Nursing at Hospital for Special Surgery (HSS) has achieved its third Magnet designation, which is the highest honor given by the American Nurses Credentialing Center for excellence in nursing care. HSS was the first hospital in New York City to receive this prestigious award and is the first in New York State to receive three consecutive Magnet designations. On our pediatric unit, all of the nurses who take care of children receive special training in the care of the hospitalized child. This includes a comprehensive approach to understanding the child’s developmental and physical needs, along with including the family in the plan of care. Inpatient and outpatient nursing staff work closely with the interdisciplinary team, comprised of pediatric orthopaedic surgeons, pediatricians, a pediatric nurse practitioner, physical therapists, social workers, a case manager, and the child life coordinator. Our goal is comprehensive planning across the continuum of care to facilitate optimal patient outcomes while maintaining a friendly environment.

Adolescent Idiopathic Scoliosis and Young Athletes: an HSS Update (Continued) most (60%) had returned to sports at an equal or higher level of physical activity. Postoperative athletic participation included a wide variety of sports and ranged from recreational to university varsity-level. The only variable studied that correlated with return to activity at the same or higher level after surgery was the lowest level of spinal fusion, which is determined by the size and extent of the spinal curvature. While patients are typically allowed to return to sports 6-12 months after surgery, this study indicated that the lowest level of fusion might predict the patient’s actual likelihood of returning to play at or above the preoperative level. Further ongoing research at HSS will elucidate why this is the case, but the data collected here may help guide patient and family expectations regarding return to athletic activity.

We know that safety is a paramount concern of children’s families. Our pediatric nurses take steps to ensure children’s safety while at HSS. These measures include: • Maintaining the physical safety of children by keeping side rails up at all times • Double checking all pediatric medications and dosages (Continued on the back page)

Spondyloarthropathy: “Arthritis of the Back” (Continued) Usually this diagnosis is established in patients in their 3rd or 4th decade and is based on clinical and x-ray findings of joint involvement. Better disease recognition and faster initiation of therapy in young patients with this condition halts progression of severe joint involvement. Early initiation of therapy in young spondyloarthropathy patients also results in fewer radiographic changes and ultimately may lead to fewer patients fulfilling criteria for ankylosing spondylitis. The medications used to treat spondyloarthropathy range from nonsteroidal anti-inflammatory drugs to traditional disease modifying agents, such as methotrexate, to the now commonly used biologic agents. Children with spondyloarthropathy are at increased risk of an inflammatory eye disease called iritis, which usually presents with a painful red eye and may be the presenting symptom of disease. Young patients with this condition should be seen regularly by a pediatric ophthalmologist.

Prompt recognition and treatment of juvenile spondyloarthropathy results in better long term disease outcomes. At Hospital for Special Surgery, the Pediatric Rheumatology Department is happy to provide any child displaying symptoms of childhood arthritis with the advice and treatment they need.

HSS Welcomes New Pediatric Orthopedic Surgeon, Emily Dodwell, MD, MPH, FRCSC Hospital for Special Surgery pediatrics is pleased to welcome Emily Dodwell, MD, MPH, FRCSC, a new Assistant Attending Pediatric Orthopedic Surgeon at HSS. Dr. Dodwell joins us from the Hospital for Sick Children in Toronto, Canada, where she served as a Clinical Fellow in Orthopedic Surgery. Specializing in general pediatric orthopedic surgery, pediatric trauma, cerebral palsy, and limb deformity correction, Dr. Dodwell treats children of all ages. Dr. Dodwell treats patients with a wide variety of musculoskeletal issues, including fractures, ligament and tendon injuries, congenital deformities, cerebral palsy, growth disturbances, and disorders such as osteogenesis imperfecta, Perthes disease, and skeletal dysplasias. Dr. Dodwell is dedicated to improving pediatric orthopedic care through orthopedic research that focuses on surgical outcomes and disparities in health care for pediatric orthopedic patients. Dr. Dodwell completed her medical doctorate at Queen’s University in Kingston, Ontario, Canada and her orthopedic residency training at the University of British Columbia, Vancouver, Canada. She has a Masters of Public Health from Harvard and attained her sub-specialty training as a pediatric orthopedic surgeon at the Hospital for Sick Children in Toronto, Canada. The recipient of numerous awards, grants, and scholarships for her work, Dr. Dodwell most recently was awarded the Orthopedic Education and Research Foundation/Ruth Jackson Orthopedic Society’s Career Development Grant and the North Pacific Orthopedic Society’s Resident Research Award. She is a member of several professional medical associations including the American Academy of Orthopedic Surgeons and Pediatric Orthopedic Society of North America.

The Connection Inspection: A High School Athlete’s Comeback After Spinal Fusion When the parents of Madison DeRose learned that their 14year-old daughter’s adolescent idiopathic scoliosis had progressed, despite the full-time Boston brace she’d been wearing for more than a year, understandably, they were concerned. Madison, an accomplished soccer, lacrosse, and basketball player about to embark on her high school career, had been unaffected by her scoliosis since first detected in the 2nd grade. Despite conservative treatment by Shevaun Doyle, MD, Assistant Attending Orthopedic Surgeon at Hospital for Special Surgery, the curve progressed beyond 50 degrees in May 2010 and required surgery. With the start of school (and soccer season) just three months away, the need for expert surgical care was critical. Dr. Doyle referred the DeRose family to Roger F. Widmann, MD, Chief of Pediatric Orthopedic Surgery at HSS, for surgical management. Madison’s mother explains how her concern for her daughter’s health and athletic career was alleviated upon meeting with Dr. Widmann. “I really appreciated Dr. Widmann’s attitude,” she says. “Knowing that athletics was a big part of Madison’s life, he reassured us that spinal fusion would not change who she was as a person, and that she could resume her life as an athlete three months after surgery. Even though Madison was having major surgery, we did not feel like it was the end of the world. It almost felt routine,” says Mrs. DeRose. In August 2010, Dr. Widmann performed the six hour surgery with great success. Madison was fused to L2 (2nd lumbar

vertebrae) with a dual rod construct and multiple pedicle screws. “Her scoliosis was typical,” says Dr. Widmann, “but her high level of physical activity and the demands she would place on her fusion were not. Her expectation was that she would be able to play contact sports again – and my goal was to get her back to full activities, including athletics, 12 weeks from the date of surgery.” Madison recovered from surgery at home, taking several walks a day to build up her strength, as prescribed by Dr. Widmann. One month following surgery, Madison walked through the doors of Irvington High School for her first day of freshman year. “I had barely any pain,” she says. “Three months after surgery I went back to playing basketball and had no difficulty at all. Later that year, I made the varsity lacrosse team and went on to be All-League. I got back to playing soccer the following fall,” explains Madison. Dr. Widmann, along with Dr. Daniel W. Green, Associate Attending Orthopedic Surgeon at HSS, continues to evaluate the impact of spinal fusion on patients like Madison after surgery. Through the HSS Return to Sports research study, Drs. Widmann and Green seek to determine the parameters most closely associated with post-operative surgery and an early return to sports, including length of the fusion, level of fusion, and pre-operative activity. This ongoing study, in which Madison is a participant, aims to enroll 90 patients before completion. Now a year after surgery, Madison continues to be a serious athlete whose dream of playing college sports is well within reach. “Thanks to Dr. Widmann and the rest of the Hospital for Special Surgery pediatric team,” Mrs. DeRose says, “she’s still Madison, only straighter.” 3

Pediatric Nursing at HSS (Continued) • Using two identifiers, name and date of birth, prior to administration of medications • Use of an electronic monitoring system to notify nurses and security if a child leaves the unit for any unscheduled reason Pediatric nursing at HSS includes a pediatric nurse practitioner (PNP). The PNP is a continued presence and resource for the nurses as well as families. The PNP participates in the care of children and provides patient and family education as needed. In addition, the PNP meets daily with the interdisciplinary team and rounds daily with the pediatricians for ongoing care. The PNP works closely with the pediatric social workers to meet the child’s and family’s needs while at HSS, as well as for discharge planning to ensure continuity of care. The PNP is also involved in ongoing training of the staff to provide pediatric-specific education. Children at HSS receive the best of care, as our nurses work as a team to enhance the child’s and family’s experience. With the opening of the new Lerner Children’s Pavilion, we will be able to provide tailored collaborative care for all of our pediatric patients and their families. We look forward to continuing our tradition of excellence in pediatric care.

www.hss.edu/peds Editor Shevaun M. Doyle, MD For inquiries, please call (877) HSS-1KID or e-mail: Peds@hss.edu Find us on Facebook at www.facebook.com/HSpecialSurgery. Follow us on Twitter @HSpecialSurgery #hsspeds. Watch us on YouTube. Download our app. ©2011 Hospital for Special Surgery. All rights reserved. Pediatric Connection® is a registered trademark of Hospital for Special Surgery. 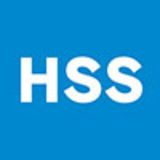