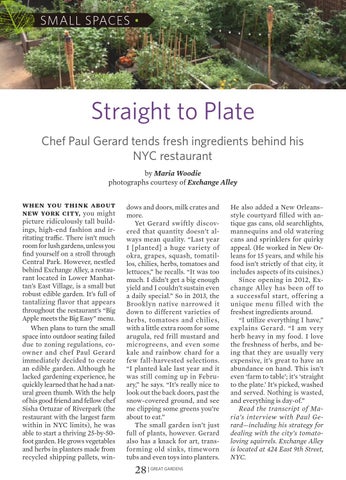 Straight to Plate Chef Paul Gerard tends fresh ingredients behind his NYC restaurant by Maria Woodie photographs courtesy of Exchange Alley WHEN YOU THINK ABOUT NEW YORK CITY, you might

picture ridiculously tall buildings, high-end fashion and irritating traffic. There isn’t much room for lush gardens, unless you find yourself on a stroll through Central Park. However, nestled behind Exchange Alley, a restaurant located in Lower Manhattan’s East Village, is a small but robust edible garden. It’s full of tantalizing flavor that appears throughout the restaurant’s “Big Apple meets the Big Easy” menu. When plans to turn the small space into outdoor seating failed due to zoning regulations, coowner and chef Paul Gerard immediately decided to create an edible garden. Although he lacked gardening experience, he quickly learned that he had a natural green thumb. With the help of his good friend and fellow chef Sisha Ortuzar of Riverpark (the restaurant with the largest farm within in NYC limits), he was able to start a thriving 25-by-50foot garden. He grows vegetables and herbs in planters made from recycled shipping pallets, win-

dows and doors, milk crates and more. Yet Gerard swiftly discovered that quantity doesn’t always mean quality. “Last year I [planted] a huge variety of okra, grapes, squash, tomatillos, chilies, herbs, tomatoes and lettuces,” he recalls. “It was too much. I didn’t get a big enough yield and I couldn’t sustain even a daily special.” So in 2013, the Brooklyn native narrowed it down to different varieties of herbs, tomatoes and chilies, with a little extra room for some arugula, red frill mustard and microgreens, and even some kale and rainbow chard for a few fall-harvested selections. “I planted kale last year and it was still coming up in February,” he says. “It’s really nice to look out the back doors, past the snow-covered ground, and see me clipping some greens you’re about to eat.” The small garden isn’t just full of plants, however. Gerard also has a knack for art, transforming old sinks, timeworn tubs and even toys into planters.

He also added a New Orleans– style courtyard filled with antique gas cans, old searchlights, mannequins and old watering cans and sprinklers for quirky appeal. (He worked in New Orleans for 15 years, and while his food isn’t strictly of that city, it includes aspects of its cuisines.) Since opening in 2012, Exchange Alley has been off to a successful start, offering a unique menu filled with the freshest ingredients around. “I utilize everything I have,” explains Gerard. “I am very herb heavy in my food. I love the freshness of herbs, and being that they are usually very expensive, it’s great to have an abundance on hand. This isn’t even ‘farm to table’; it’s ‘straight to the plate.’ It’s picked, washed and served. Nothing is wasted, and everything is day-of.” Read the transcript of Maria’s interview with Paul Gerard—including his strategy for dealing with the city’s tomatoloving squirrels. Exchange Alley is located at 424 East 9th Street, NYC.

In this issue you’ll find stories on the Memphis Botanic Garden and the hellebore collection at Yew Dell Botanical Gardens—both with tips from the staff for you to use at home. We’re also covering a small but productive NYC restaurant garden, again with helpful tips from the chef/gardener. And, this being fall, the magazine would not have been complete without a bulb story. There's much more, too. Enjoy! 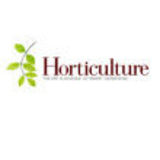