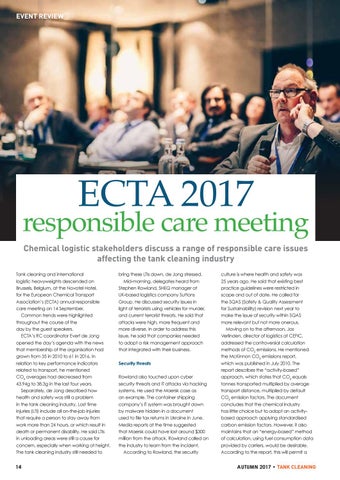 Tank cleaning and international logistic heavyweights descended on Brussels, Belgium, at the Novotel Hotel, for the European Chemical Transport Association’s (ECTA) annual responsible care meeting on 14 September. Common trends were highlighted throughout the course of the day by the guest speakers. ECTA’s RC coordinator Evert de Jong opened the day’s agenda with the news that membership of the organisation had grown from 35 in 2010 to 61 in 2016. In relation to key performance indicators related to transport, he mentioned CO2 averages had decreased from 43.94g to 38.3g in the last four years. Separately, de Jong described how health and safety was still a problem in the tank cleaning industry. Lost time injuries (LTI) include all on-the-job injuries that require a person to stay away from work more than 24 hours, or which result in death or permanent disability. He said LTIs in unloading areas were still a cause for concern, especially when working at height. The tank cleaning industry still needed to

bring these LTIs down, de Jong stressed. Mid-morning, delegates heard from Stephen Rowland, SHEQ manager at UK-based logistics company Suttons Group. He discussed security issues in light of terrorists using vehicles for murder, and current terrorist threats. He said that attacks were high, more frequent and more diverse. In order to address this issue, he said that companies needed to adopt a risk management approach that integrated with their business. Security threats Rowland also touched upon cyber security threats and IT attacks via hacking systems. He used the Maersk case as an example. The container shipping company’s IT system was brought down by malware hidden in a document used to file tax returns in Ukraine in June. Media reports at the time suggested that Maersk could have lost around $300 million from the attack. Rowland called on the industry to learn from the incident. According to Rowland, the security

culture is where health and safety was 25 years ago. He said that existing best practice guidelines were restricted in scope and out of date. He called for the SQAS (Safety & Quality Assessment for Sustainability) revision next year to make the issue of security within SQAS more relevant but not more onerous. Moving on to the afternoon, Jos Verlinden, director of logistics at CEFIC, addressed the controversial calculation methods of CO2 emissions. He mentioned the McKinnon CO2 emissions report, which was published in July 2010. The report describes the “activity-based” approach, which states that CO2 equals tonnes transported multiplied by average transport distance, multiplied by default CO2 emission factors. The document concludes that the chemical industry has little choice but to adopt an activitybased approach applying standardised carbon emission factors. However, it also maintains that an “energy-based” method of calculation, using fuel consumption data provided by carriers, would be desirable. According to the report, this will permit a