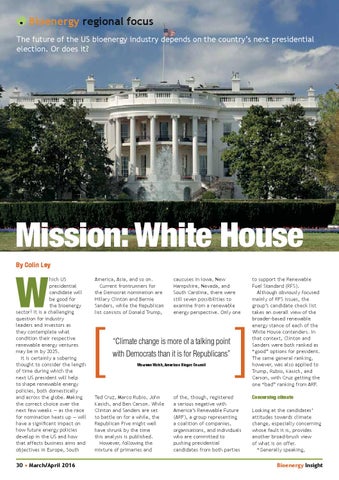 Bioenergy regional focus The future of the US bioenergy industry depends on the country’s next presidential election. Or does it?

hich US presidential candidate will be good for the bioenergy sector? It is a challenging question for industry leaders and investors as they contemplate what condition their respective renewable energy ventures may be in by 2025. It is certainly a sobering thought to consider the length of time during which the next US president will help to shape renewable energy policies, both domestically and across the globe. Making the correct choice over the next few weeks — as the race for nomination heats up — will have a significant impact on how future energy policies develop in the US and how that affects business aims and objectives in Europe, South

America, Asia, and so on. Current frontrunners for the Democrat nomination are Hillary Clinton and Bernie Sanders, while the Republican list consists of Donald Trump,

caucuses in Iowa, New Hampshire, Nevada, and South Carolina, there were still seven possibilities to examine from a renewable energy perspective. Only one

“Climate change is more of a talking point with Democrats than it is for Republicans” Maureen Walsh, American Biogas Council

Ted Cruz, Marco Rubio, John Kasich, and Ben Carson. While Clinton and Sanders are set to battle on for a while, the Republican Five might well have shrunk by the time this analysis is published. However, following the mixture of primaries and

of the, though, registered a serious negative with America’s Renewable Future (ARF), a group representing a coalition of companies, organisations, and individuals who are committed to pushing presidential candidates from both parties

to support the Renewable Fuel Standard (RFS). Although obviously focused mainly of RFS issues, the group’s candidate check list takes an overall view of the broader-based renewable energy stance of each of the White House contenders. In that context, Clinton and Sanders were both ranked as “good” options for president. The same general ranking, however, was also applied to Trump, Rubio, Kasich, and Carson, with Cruz getting the one “bad” ranking from ARF. Concerning climate Looking at the candidates’ attitudes towards climate change, especially concerning whose fault it is, provides another broad-brush view of what is on offer. “Generally speaking,