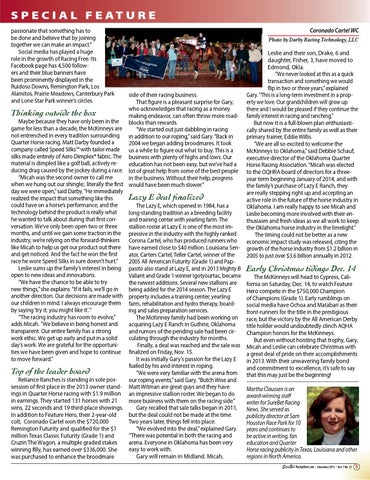 S P E C i A L F E AT U R E passionate that something has to be done and believe that by joining together we can make an impact.” Social media has played a huge role in the growth of Racing Free. Its Facebook page has 4,500 followers and their blue banners have been prominently displayed in the Ruidoso Downs, Remington Park, Los Alamitos, Prairie Meadows, Canterbury Park and Lone Star Park winner’s circles.

side of their racing business. That figure is a pleasant surprise for Gary, who acknowledges that racing as a money Thinking outside the box making endeavor, can often throw more roadMaybe because they have only been in the blocks than rewards. game for less than a decade, the McKinneys are “We started out just dabbling in racing not entrenched in every tradition surrounding in addition to our roping,” said Gary. “Back in Quarter Horse racing. Matt Darby founded a 2004 we began adding broodmares. It took company called Speed Silks™ with tailor-made us a while to figure out what to buy. This is a silks made entirely of Aero Dimplex® fabric. The business with plenty of highs and lows. Our material is dimpled like a golf ball, actively reeducation has not been easy, but we’ve had a ducing drag caused by the jockey during a race. lot of great help from some of the best people “Micah was the second owner to call me in the business. Without their help, progress when we hung out our shingle;. literally the first would have been much slower.” day we were open,” said Darby. “He immediately Lazy E deal ﬁnalized realized the impact that something like this could have on a horse’s performance, and the The Lazy E, which opened in 1984, has a technology behind the product is really what long-standing tradition as a breeding facility he wanted to talk about during that first conand training center with yearling farm. The versation. We’ve only been open two or three stallion roster at Lazy E is one of the most immonths, and until we gain some traction in the pressive in the industry with the highly ranked industry, we’re relying on the forward-thinkers Corona Cartel, who has produced runners who like Micah to help us get our product out there have earned close to $40 million. Louisiana Senand get noticed. And the fact he won the first ator, Carters Cartel, Teller Cartel, winner of the race he wore Speed Silks in sure doesn’t hurt.” 2005 All American Futurity (Grade 1) and PapLeslie sums up the family’s interest in being pasito also stand at Lazy E, and in 2013 Mighty B open to new ideas and innovations. Valiant and Grade 1 winner Igotyourtac, became “We have the chance to be able to try the newest additions. Several new stallions are new things,” she explains. “If it fails, we’ll go in being added for the 2014 season. The Lazy E another direction. Our decisions are made with property includes a training center, yearling our children in mind. I always encourage them farm, rehabilitation and hydro therapy, boardby saying ‘try it; you might like it’..“ ing and sales preparation services. “The racing industry has room to evolve,” The McKinney family had been working on adds Micah. ”We believe in being honest and acquiring Lazy E Ranch in Guthrie, Oklahoma transparent. Our entire family has a strong and rumors of the pending sale had been cirwork ethic. We get up early and put in a solid culating through the industry for months. day’s work. We are grateful for the opportuniFinally, a deal was reached and the sale was ties we have been given and hope to continue finalized on Friday, Nov. 15. to move forward.” It was initially Gary’s passion for the Lazy E fueled by his avid interest in roping. Top of the leader board “We were very familiar with the arena from Reliance Ranches is standing in sole posour roping events,” said Gary. “Butch Wise and session of first place in the 2013 owner stand- Matt Witman are great guys and they have ings in Quarter Horse racing with $1.9 million an impressive stallion roster. We began to do in earnings. They started 131 horses with 21 more business with them on the racing side.” wins, 22 seconds and 19 third-place showings. Gary recalled that sale talks began in 2011, In addition to Feature Hero, their 2-year-old but the deal could not be made at the time. colt, Coronado Cartel won the $720,000 Two years later, things fell into place. “We evolved into the deal,” explained Gary. Remington Futurity and qualified for the $1 “There was potential in both the racing and million Texas Classic Futurity (Grade 1) and arena. Everyone in Oklahoma has been very Cruzin The Wagon, a multiple graded stakes easy to work with. winning filly, has earned over $336,000. She Gary will remain in Midland. Micah, was purchased to enhance the broodmare

Leslie and their son, Drake, 6 and daughter, Fisher, 3, have moved to Edmond, Okla. “We never looked at this as a quick transaction and something we would flip in two or three years,” explained Gary. “This is a long-term investment in a property we love. Our grandchildren will grow up there and I would be pleased if they continue the family interest in racing and ranching.” But now it is a full-blown plan enthusiastically shared by the entire family as well as their primary trainer, Eddie Willis. “We are all so excited to welcome the McKinneys to Oklahoma,” said Debbie Schauf, executive director of the Oklahoma Quarter Horse Racing Association. “Micah was elected to the OQHRA board of directors for a threeyear term beginning January of 2014, and with the family’s purchase of Lazy E Ranch, they are really stepping right up and accepting an active role in the future of the horse industry in Oklahoma. I am really happy to see Micah and Leslie becoming more involved with their enthusiasm and fresh ideas as we all work to keep the Oklahoma horse industry in the limelight.” The timing could not be better as a new economic impact study was released, citing the growth of the horse industry from $1.2 billion in 2005 to just over $3.6 billion annually in 2012.

The McKinneys will head to Cypress, California on Saturday, Dec. 14, to watch Feature Hero compete in the $750,000 Champion of Champions (Grade 1). Early rumblings on social media have Ochoa and Matabari as their front-runners for the title in the prestigious race, but the victory by the All American Derby title holder would undoubtedly clinch AQHA Champion honors for the McKinneys. But even without hoisting that trophy, Gary, Micah and Leslie can celebrate Christmas with a great deal of pride on their accomplishments in 2013. With their unwavering family bond and commitment to excellence, it’s safe to say that this may just be the beginning!

Martha Claussen is an award-winning staﬀ writer for SureBet Racing News. She served as publicity director at Sam Houston Race Park for 10 years and continues to be active in writing, fan education and Quarter Horse racing publicity in Texas, Louisiana and other regions in North America. SureBet RacingNews.com • December 2013 • Vol. 7 No. 12 5 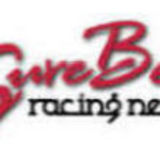