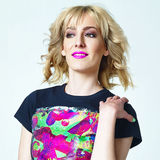 Juli Horanyi, the Hungarian singer, after earning her degree in costume design, she has started building her singing career. After 3 years being in an underground duo project (called Mius) she decided she wanted to try herself in the mainstream music media so she signed up for the X-Factor talent competition show where she was the runner up. Shortly after the final episode of the show, she started her musical studio work and soon her first debut song called Electrical came out.