UK Events and Diesel Use: Responding to a public health emergency 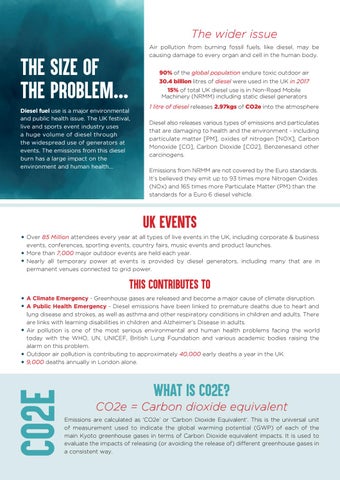 The wider issue Air pollution from burning fossil fuels, like diesel, may be causing damage to every organ and cell in the human body.

The size of the problem…

90% of the global population endure toxic outdoor air 30.4 billion litres of diesel were used in the UK in 2017 15% of total UK diesel use is in Non-Road Mobile Machinery (NRMM) including static diesel generators

Diesel fuel use is a major environmental and public health issue. The UK festival, live and sports event industry uses a huge volume of diesel through the widespread use of generators at events. The emissions from this diesel burn has a large impact on the environment and human health...

1 litre of diesel releases 2.97kgs of CO2e into the atmosphere Diesel also releases various types of emissions and particulates that are damaging to health and the environment - including particulate matter [PM], oxides of nitrogen [NOX], Carbon Monoxide [CO], Carbon Dioxide [CO2], Benzenesand other carcinogens. Emissions from NRMM are not covered by the Euro standards. It’s believed they emit up to 93 times more Nitrogen Oxides (NOx) and 165 times more Particulate Matter (PM) than the standards for a Euro 6 diesel vehicle.

UK Events • Over 85 Million attendees every year at all types of live events in the UK, including corporate &amp; business • •

events, conferences, sporting events, country fairs, music events and product launches. More than 7,000 major outdoor events are held each year. Nearly all temporary power at events is provided by diesel generators, including many that are in permanent venues connected to grid power.

This contributes to • A Climate Emergency - Greenhouse gases are released and become a major cause of climate disruption. • A Public Health Emergency - Diesel emissions have been linked to premature deaths due to heart and •

lung disease and strokes, as well as asthma and other respiratory conditions in children and adults. There are links with learning disabilities in children and Alzheimer’s Disease in adults. Air pollution is one of the most serious environmental and human health problems facing the world today with the WHO, UN, UNICEF, British Lung Foundation and various academic bodies raising the alarm on this problem. Outdoor air pollution is contributing to approximately 40,000 early deaths a year in the UK. 9,000 deaths annually in London alone.

What is CO2e? CO2e = Carbon dioxide equivalent Emissions are calculated as ‘CO2e’ or ‘Carbon Dioxide Equivalent’. This is the universal unit of measurement used to indicate the global warming potential (GWP) of each of the main Kyoto greenhouse gases in terms of Carbon Dioxide equivalent impacts. It is used to evaluate the impacts of releasing (or avoiding the release of) different greenhouse gases in a consistent way.

UK Events and Diesel Use: Responding to a public health emergency

Factsheet based on industry study into diesel use across UK events. 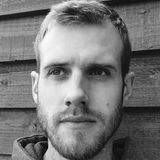