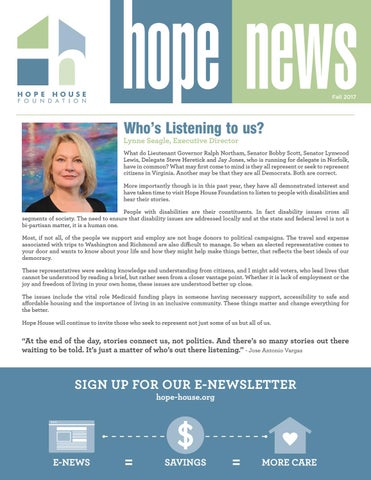 What do Lieutenant Governor Ralph Northam, Senator Bobby Scott, Senator Lynwood Lewis, Delegate Steve Heretick and Jay Jones, who is running for delegate in Norfolk, have in common? What may first come to mind is they all represent or seek to represent citizens in Virginia. Another may be that they are all Democrats. Both are correct. More importantly though is in this past year, they have all demonstrated interest and have taken time to visit Hope House Foundation to listen to people with disabilities and hear their stories. People with disabilities are their constituents. In fact disability issues cross all segments of society. The need to ensure that disability issues are addressed locally and at the state and federal level is not a bi-partisan matter, it is a human one. Most, if not all, of the people we support and employ are not huge donors to political campaigns. The travel and expense associated with trips to Washington and Richmond are also difficult to manage. So when an elected representative comes to your door and wants to know about your life and how they might help make things better, that reflects the best ideals of our democracy. These representatives were seeking knowledge and understanding from citizens, and I might add voters, who lead lives that cannot be understood by reading a brief, but rather seen from a closer vantage point. Whether it is lack of employment or the joy and freedom of living in your own home, these issues are understood better up close. The issues include the vital role Medicaid funding plays in someone having necessary support, accessibility to safe and affordable housing and the importance of living in an inclusive community. These things matter and change everything for the better. Hope House will continue to invite those who seek to represent not just some of us but all of us.

“At the end of the day, stories connect us, not politics. And there’s so many stories out there waiting to be told. It’s just a matter of who’s out there listening.” - Jose Antonio Vargas

THE EYES OF HOPE

“I use a modified Google Home device and an Amazon Dot to operate the lights in the apartment, operate my television and Netflix, and open and close my door. This is the first time I have had this kind of technology. This has allowed me to become more independent. This was done by WSC, a company that primarily installs Smart technology for people’s homes. I feel that Hope House has been wonderful so far. It has allowed me to live independently without nearly as much assistance from my family. I am a private person, but I tell anyone in the community who is interested about what people with disabilities go through, especially in context of government assistance issues. I feel that a lot of people are unwillingly ignorant of what people with disabilities actually go through. I would tell anyone that you have to walk a mile in someone else’s shoes before you really understand.”

HOPE HOUSE FOUNDATION BOARD OF DIRECTORS

As part of Hope House Foundation’s continual education program, six staff members recently attended the National Alliance for Direct Support Professionals (NADSP) in Nebraska. The keynote speakers were Dave Hingsburger, Dr. Rick Radar and Lynne Seagle. The group of part-time and full-time employees ranged in employment from six months to 16 years. Hope House has won two national awards for direct support professionals, and this type of experience is shared with the entire agency to help us constantly improve service delivery, and it underscores the importance of the professionals who deliver them on a daily basis.

Presented by: Sponsored by:

Hope House Foundation provides services to adults with intellectual and developmental disabilities exclusively in their own homes or apartments. #DIDYOUKNOW 100% of people we support live, work and play in their communities. If you would like to subscribe to our eNewsletter please visit: http://www.hope-house.org/subscribe/ 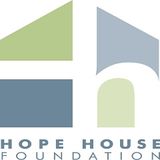