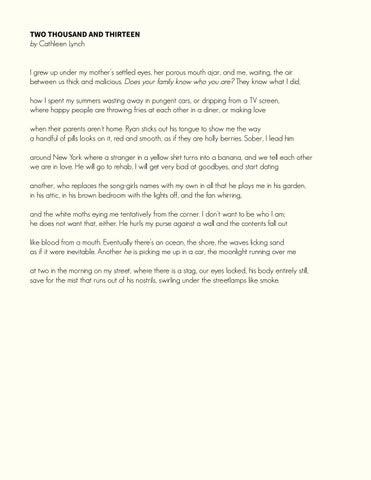 TWO THOUSAND AND THIRTEEN by Cathleen Lynch I grew up under my mother’s settled eyes, her porous mouth ajar, and me, waiting, the air between us thick and malicious. Does your family know who you are? They know what I did, how I spent my summers wasting away in pungent cars, or dripping from a TV screen, where happy people are throwing fries at each other in a diner, or making love when their parents aren’t home. Ryan sticks out his tongue to show me the way a handful of pills looks on it, red and smooth, as if they are holly berries. Sober, I lead him around New York where a stranger in a yellow shirt turns into a banana, and we tell each other we are in love. He will go to rehab, I will get very bad at goodbyes, and start dating another, who replaces the song-girls names with my own in all that he plays me in his garden, in his attic, in his brown bedroom with the lights off, and the fan whirring, and the white moths eying me tentatively from the corner. I don’t want to be who I am; he does not want that, either. He hurls my purse against a wall and the contents fall out like blood from a mouth. Eventually there’s an ocean, the shore, the waves licking sand as if it were inevitable. Another he is picking me up in a car, the moonlight running over me at two in the morning on my street, where there is a stag, our eyes locked, his body entirely still, save for the mist that runs out of his nostrils, swirling under the streetlamps like smoke. 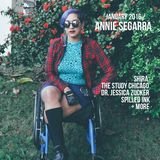