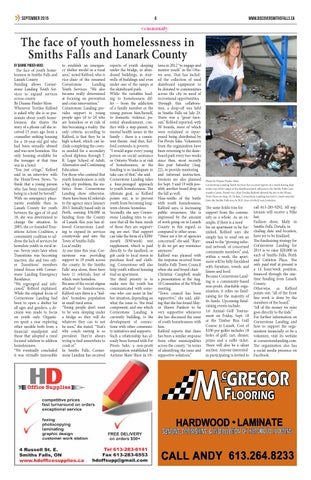 The face of youth homelessness in Smiths Falls and Lanark County By Dianne Pinder-Moss The face of youth homelessness in Smiths Falls and Lanark County Funding allows Cornerstone Landing Youth Services to expand services across county By Dianne Pinder-Moss Whenever Terrilee Kelford is asked why she is so passionate about youth homelessness, she shares the story of a phone call she received 15 years ago from a counsellor seeking housing for a 16-year-old girl who had been sexually abused and was now homeless. The only housing available for the teenager at that time was in a hotel. “You just cringe,” Kelford said in an interview with the HomeTown News, “to think that a young person who has been traumatized being in a hotel by herself.” With no emergency placements available then in Lanark County for youth between the ages of 16 and 18, she was determined to change the situation. In 2003, she co-founded Transitions Action Coalition, a community coalition to address the lack of services for homeless youth in rural areas. Seven years later when Transitions was becoming inactive, she and two other Transitions’ members joined forces with Cornerstone Landing Emergency Residence. “We regrouped and refocused,” Kelford explained. While the original focus of Cornerstone Landing had been to open a shelter for all ages and genders, a decision was made to focus on youth only. Organizers spent a year exploring other models both from a financial standpoint and those that adopted a rural focused solution to address homelessness. “We eventually concluded it was virtually impossible

to establish an emergency shelter model in a rural area,” noted Kelford, who is vice-chair of the renamed Cornerstone Landing Youth Services. “We also became really determined at focusing on prevention and crisis intervention.” Cornerstone Landing provides support to young people ages 16 to 24 who are homeless or at risk of this becoming a reality. The only criteria, according to Kelford, is that they be in high school, which can include completing the courses needed for a secondary school diploma through T. R. Leger School of Adult, Alternative and Continuing Education. For those who contend that youth homelessness is only a big city problem, the statistics from Cornerstone Landing show otherwise. There have been 62 referrals to the agency since January 2013. Initially based only in Perth, earning $36,000 in funding from the County of Lanark this year has allowed Cornerstone Landing to expand its services countywide and into the Town of Smiths Falls. Local reality At one time this year, Cornerstone was providing support to 19 youth across the county. In the Smiths Falls’ area alone, there have been 11 referrals, four of which were homeless. Because of the social stigma attached to homelessness, Kelford says there is a “hidden” homeless population in small rural areas. “Young people don’t want to be seen sleeping under a bridge so they will do whatever they can to not be seen,” she stated. “That’s why couch surfing is so prevalent. They’re always trying to find somewhere to crash at.” In Smiths Falls, Cornerstone Landing has received

reports of youth sleeping under the bridge, in abandoned buildings, in stairwells of buildings and even under one of the ramps at the skateboard park. While the variables leading to homelessness differ – from the addiction of a family member or the young person him/herself, to domestic violence, parental abandonment, conflict with a step-parent, to mental health issues in the family – there is a consistent theme. And that, Kelford contends, is poverty. “I would argue every young person on social assistance or Ontario Works is at risk of homelessness, as the funding is so inadequate to take care of that,” she said. Cornerstone Landing takes a four-pronged approach to youth homelessness. The ultimate goal, as Kelford points out, is to prevent youth from becoming longterm chronic homeless. Secondly, she says Cornerstone Landing tries to ensure that all the basic needs of those they are supporting are met. That support can take the form of a $200/ month ($50/week) rent supplement, which is paid directly to the landlord, or gift cards to local stores to purchase food and clothing. Cornerstone will also help youth without housing find an apartment. The third priority is to make sure the youth has communicated with someone who can assist in his/ her situation, depending on what the issue is. The final component, and one which Cornerstone Landing is currently building, is the development of connections with other community initiatives and supports. Such a relationship has already been formed with For Pivots Sake, a non-profit organization established by Antique Skate Shop in Ot-

tawa in 2012 “to engage and mentor youth” in the Ottawa area. That has included the collection of used skateboard equipment to be donated to communities across the city in need of recreational opportunities. Through this collaboration, a drop-off was held in Smiths Falls on July 25. There was a “great turnout,” Kelford reported, with 30 boards, most of which were reclaimed or repurposed being distributed by For Pivots Sake. Volunteers from the organization have been returning to the skateboard park every two weeks since then, most recently this past Saturday (Aug. 22), to provide mentoring and informal instruction. Sessions are also planned for Sept. 5 and 19 with possibly another board drop in the fall as well. Nine-tenths of the battle with youth homelessness, Kelford says, is increasing public awareness. She is impressed by the amount of work going on in Lanark County in this regard, as compared to other areas. “There are a lot of agencies concerned,” she said. “Rarely do we get any resistance anymore.” Kelford was pleased with the response received from Smiths Falls Town Council when she and board chair Christine Campbell made a presentation at the Aug. 10 Committee of the Whole meeting. “Town council has been supportive,” she said, adding that she has found Mayor Shawn Pankow to be very supportive whenever she has discussed the issue of youth homelessness with him. Kelford reports that there has been a similar response from other municipalities across the county, “in terms of identifying the issue and supportive solutions.”

Photo by Dianne Pinder-Moss Cornerstone Landing Youth Services has received reports of a youth having slept under one of the ramps at the skateboard park adjacent to the Smiths Falls Community Centre. Board vice-chair Terrilee Kelford showed the site to the HomeTown News on Aug. 18. To date, Cornerstone Landing has had 11 youth referrals from the Smiths Falls area in 2015, four of which were homeless.

The same holds true for support from the community as a whole. As an example, if there is a need for an apartment to be furnished, Kelford says she simply has to send out an email to the “growing informal network of concerned community members” and, within a week, the apartment will be fully furnished with furniture, towels and linens and food. Because Cornerstone Landing is a community-based non-profit, charitable organization, it relies on fundraising for the majority of its funds. Upcoming fundraising events include: 1st Annual Golf Tournament on Friday, Sept. 18 at the Timber Run Golf Course in Lanark. Cost of $100 per golfer includes 18 holes of golf, cart, dinner, prizes and a raffle ticket. There will also be a silent auction. Anyone interested in participating is invited to

call 613-285-9292. All registrants will receive a Nike hat; Fashion show, likely in Smiths Falls. Details, in cluding date and location, have yet to be finalized. The fundraising strategy for Cornerstone Landing for 2015 is to raise $20,000 in each of Smiths Falls, Perth and Carleton Place. The only paid staff at present is a 14 hour/week position, financed through the onetime funding from Lanark County. Otherwise, as Kelford points out, “all of the front line work is done by the members of the board.” “All of the money we raise goes directly to the kids.” For further information on Cornerstone Landing and how to support the organization financially or be a volunteer, visit its website at cornerstonelanding.com. The organization also has a social media presence on Facebook. 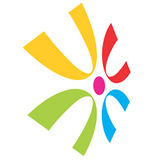