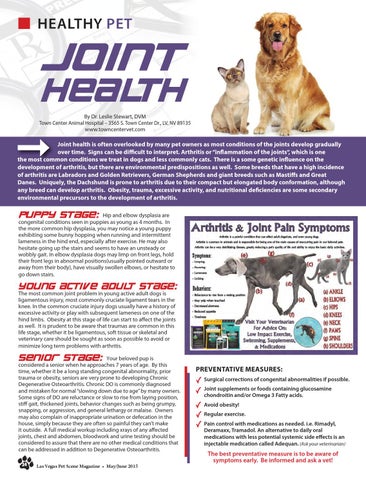 Joint health is often overlooked by many pet owners as most conditions of the joints develop gradually over time. Signs can be difficult to interpret. Arthritis or “inflammation of the joints”, which is one the most common conditions we treat in dogs and less commonly cats. There is a some genetic influence on the development of arthritis, but there are environmental predispositions as well. Some breeds that have a high incidence of arthritis are Labradors and Golden Retrievers, German Shepherds and giant breeds such as Mastiffs and Great Danes. Uniquely, the Dachshund is prone to arthritis due to their compact but elongated body conformation, although any breed can develop arthritis. Obesity, trauma, excessive activity, and nutritional deficiencies are some secondary environmental precursors to the development of arthritis. Hip and elbow dysplasia are congenital conditions seen in puppies as young as 4 months. In the more common hip dysplasia, you may notice a young puppy exhibiting some bunny hopping when running and intermittent lameness in the hind end, especially after exercise. He may also hesitate going up the stairs and seems to have an unsteady or wobbly gait. In elbow dysplasia dogs may limp on front legs, hold their front legs in abnormal positions(usually pointed outward or away from their body), have visually swollen elbows, or hesitate to go down stairs. The most common joint problem in young active adult dogs is ligamentous injury, most commonly cruciate ligament tears in the knee. In the common cruciate injury dogs usually have a history of excessive activity or play with subsequent lameness on one of the hind limbs. Obesity at this stage of life can start to affect the joints as well. It is prudent to be aware that traumas are common in this life stage, whether it be ligamentous, soft tissue or skeletal and veterinary care should be sought as soon as possible to avoid or minimize long term problems with arthritis. Your beloved pup is considered a senior when he approaches 7 years of age. By this time, whether it be a long standing congenital abnormality, prior trauma or obesity, seniors are very prone to developing Chronic Degenerative Osteoarthritis. Chronic DO is commonly diagnosed and mistaken for normal “slowing down due to age” by many owners. Some signs of DO are reluctance or slow to rise from laying position, stiff gait, thickened joints, behavior changes such as being grumpy, snapping, or aggression, and general lethargy or malaise. Owners may also complain of inappropriate urination or defecation in the house, simply because they are often so painful they can’t make it outside. A full medical workup including xrays of any affected joints, chest and abdomen, bloodwork and urine testing should be considered to assure that there are no other medical conditions that can be addressed in addition to Degenerative Osteoarthritis. 24

The best preventative measure is to be aware of symptoms early. Be informed and ask a vet! 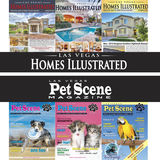