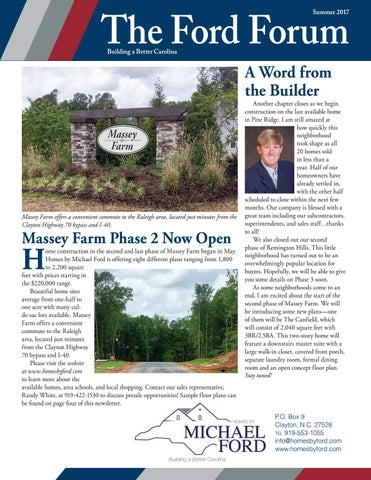 A Word from the Builder

Massey Farm offers a convenient commute to the Raleigh area, located just minutes from the Clayton Highway 70 bypass and I-40.

ome construction in the second and last phase of Massey Farm began in May. Homes by Michael Ford is offering eight different plans ranging from 1,800 to 2,200 square feet with prices starting in the $220,000 range. Beautiful home sites average from one-half to one acre with many culde-sac lots available. Massey Farm offers a convenient commute to the Raleigh area, located just minutes from the Clayton Highway 70 bypass and I-40. Please visit the website at www.homesbyford.com to learn more about the available homes, area schools, and local shopping. Contact our sales representative, Randy White, at 919-422-1530 to discuss presale opportunities! Sample floor plans can be found on page four of this newsletter.

Another chapter closes as we begin construction on the last available home in Pine Ridge. I am still amazed at how quickly this neighborhood took shape as all 20 homes sold in less than a year. Half of our homeowners have already settled in, with the other half scheduled to close within the next few months. Our company is blessed with a great team including our subcontractors, superintendents, and sales staffâ&amp;#x20AC;Śthanks to all! We also closed out our second phase of Remington Hills. This little neighborhood has turned out to be an overwhelmingly popular location for buyers. Hopefully, we will be able to give you some details on Phase 3 soon. As some neighborhoods come to an end, I am excited about the start of the second phase of Massey Farm. We will be introducing some new plansâ&amp;#x20AC;&amp;#x201D;one of them will be The Canfield, which will consist of 2,040 square feet with 3BR/2.5BA. This two-story home will feature a downstairs master suite with a large walk-in closet, covered front porch, separate laundry room, formal dining room and an open concept floor plan. Stay tuned!

Answer These Questions To Determine Your Company’s Strategic Direction

How many Wright brothers were there?

You can’t achieve success if you don’t know where your organization or team is going. These questions can help you set the right course: • What are your assumptions? Clarify what you know—and don’t know—about how organizations and people succeed in your industry. • What do you want to do, or sell, or make? And, more important: What do you not want to do? • What does your ideal customer look and act like? What customers do you want to avoid? • What’s your competitive advantage? What do you do better than the competition? Do you need to do any work to make yourself more competitive? • What rewards do you expect? You need a good idea of what financial goals you can reasonably look forward to, as well as what emotional satisfaction and fulfillment you require to make your efforts worthwhile.

The custom of steeping tea in bags came about by accident, according to Cassie Liversidge, author of Homegrown Tea: An Illustrated Guide to Planting, Harvesting and Blending Teas and Tisanes (St. Martin’s Griffin). Thomas Sullivan, a tea dealer in New York in the early 20th century, shipped samples of his teas around the world in silk bags made by his wife. They expected customers to remove the tea from the bags for brewing, but many of the recipients believed that they were supposed to brew the tea in the bags. In time, the concept of the tea bag spread around the world. By 2012, more than 65% of the tea consumed in the United States was brewed in tea bags.

Rules Apply To Everyone

During the Civil War, Ulysses S. Grant, commander of the Union forces, had to reprimand a guard who had deserted his post. “Orders must be strictly and promptly obeyed always,” Grant told the young soldier. A week later, the same soldier was told to guard a steamboat loaded with ammunition. His assignment: to make sure that nobody with a lighted pipe or cigar came near the boat. On the guard’s first day at his new post, General Grant started walking toward the boat, puffing away on one of his famous cigars. “Halt!” called the guard. “I have been taught to obey orders strictly and promptly, and my orders are to allow no one to approach this boat with a lighted cigar.” With a smile at hearing his own words repeated back to him, Grant threw the cigar in the river.

What we see can affect how we think. Psychologist Karl Duncker observed this over a century ago, according to an article on the Observer website, with an experiment known as the “Candle Problem.” Duncker led some test subjects to a table with a candle, a book of matches, and a box of tacks. He asked them to find a way to attach the candle to the wall so that its wax wouldn’t drip on the table. None of them could do it, until Duncker made a slight change. In the second experiment, he used all the same materials, except this time he placed the tacks on the table outside the box. Most of the test subjects quickly figured out that they could stick the box to the wall using the tacks, so the wax would drip only inside the box. The point? This sort of “functional fixedness” can be seen in many patterns of behavior, from taking the same route to work every day to holding on to ideas that have outlived their purpose.

Tips For A Productive Meeting

We’ve all been part of meetings in which nothing much was accomplished. Most likely, the person conducting the meeting failed to create the right environment for a productive discussion. For the next meeting you lead, follow this advice: • Insist on an atmosphere of confidentiality. You’re probably not discussing national security or high-level business information, but the principle should remain the same: Whatever people say in the room should remain in the room. That means people don’t have to worry about their words coming back to haunt them later. Share results, not talk. • Agree on a united front. Whatever disagreements arise during the meeting, make sure everyone is committed to standing together once the meeting is over. You “Success is not final; failure is should encourage people with different points of view to express their opinions, but on everyone the need to support your final decision and not to undercut it. not fatal: It is the courage to • impress Don’t let silence reign. Too often meetings end in apparent agreement because no one spoke up to ask a question or offer a conflicting viewpoint. As a leader, make a continue that counts.” point to ask the quiet people what they think—and remind folks that voicing their ­—Winston S. Churchill thoughts is a fundamental responsibility. • Discourage interruptions. When discussion grows animated, aggressive speakers can easily drown out others in the room. You should play referee when this SPEED BUMP Dave Coverly happens—making certain everyone gets a chance to speak. Employees who get shortchanged in one meeting may contribute less to the next meeting.

How To Be A Rock Star At Work

If you want to be successful at work, then getting a reputation for taking initiative is one key goal to accomplish. How do you earn that label? Try the following steps to make the word “initiative” synonymous with your name: • Go above and beyond. People will be impressed when they see you willing to accept the responsibility that others might have shirked or simply not wanted. • Focus on helping others. When you take on extra efforts, concentrate on helping your co-workers or the organization at large. People will start using words like “selfless” and “dedicated” to describe you. • Don’t give up. Stick to your projects to the end and get them finished. People will know they can rely on you to keep your commitments. 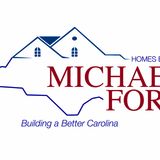