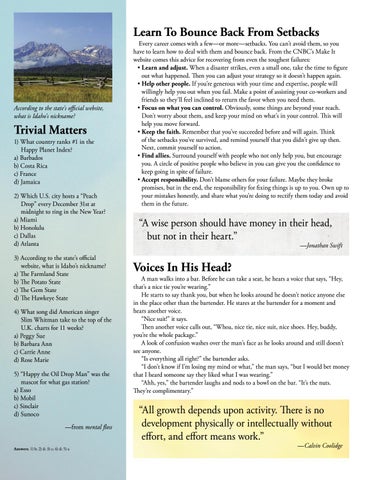 Learn To Bounce Back From Setbacks

According to the state's official website, what is Idaho's nickname?

1) What country ranks #1 in the Happy Planet Index? a) Barbados b) Costa Rica c) France d) Jamaica 2) Which U.S. city hosts a “Peach Drop” every December 31st at midnight to ring in the New Year? a) Miami b) Honolulu c) Dallas d) Atlanta 3) According to the state’s official website, what is Idaho’s nickname? a) The Farmland State b) The Potato State c) The Gem State d) The Hawkeye State 4) What song did American singer Slim Whitman take to the top of the U.K. charts for 11 weeks? a) Peggy Sue b) Barbara Ann c) Carrie Anne d) Rose Marie 5) “Happy the Oil Drop Man” was the mascot for what gas station? a) Esso b) Mobil c) Sinclair d) Sunoco —from mental floss Answers: 1) b; 2) d; 3) c; 4) d; 5) a

Every career comes with a few—or more—setbacks. You can’t avoid them, so you have to learn how to deal with them and bounce back. From the CNBC’s Make It website comes this advice for recovering from even the toughest failures: • Learn and adjust. When a disaster strikes, even a small one, take the time to figure out what happened. Then you can adjust your strategy so it doesn’t happen again. • Help other people. If you’re generous with your time and expertise, people will willingly help you out when you fail. Make a point of assisting your co-workers and friends so they’ll feel inclined to return the favor when you need them. • Focus on what you can control. Obviously, some things are beyond your reach. Don’t worry about them, and keep your mind on what’s in your control. This will help you move forward. • Keep the faith. Remember that you’ve succeeded before and will again. Think of the setbacks you’ve survived, and remind yourself that you didn’t give up then. Next, commit yourself to action. • Find allies. Surround yourself with people who not only help you, but encourage you. A circle of positive people who believe in you can give you the confidence to keep going in spite of failure. • Accept responsibility. Don’t blame others for your failure. Maybe they broke promises, but in the end, the responsibility for fixing things is up to you. Own up to your mistakes honestly, and share what you’re doing to rectify them today and avoid them in the future.

Voices In His Head?

A man walks into a bar. Before he can take a seat, he hears a voice that says, “Hey, that’s a nice tie you’re wearing.” He starts to say thank you, but when he looks around he doesn’t notice anyone else in the place other than the bartender. He stares at the bartender for a moment and hears another voice. “Nice suit!” it says. Then another voice calls out, “Whoa, nice tie, nice suit, nice shoes. Hey, buddy, you’re the whole package.” A look of confusion washes over the man’s face as he looks around and still doesn’t see anyone. “Is everything all right?” the bartender asks. “I don’t know if I’m losing my mind or what,” the man says, “but I would bet money that I heard someone say they liked what I was wearing.” “Ahh, yes,” the bartender laughs and nods to a bowl on the bar. “It’s the nuts. They’re complimentary.”

“All growth depends upon activity. There is no development physically or intellectually without effort, and effort means work.”