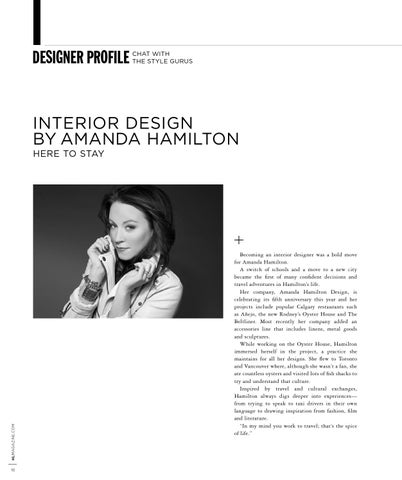 CHAT WITH THE STYLE GURUS

Becoming an interior designer was a bold move for Amanda Hamilton. A switch of schools and a move to a new city became the first of many confident decisions and travel adventures in Hamilton’s life. Her company, Amanda Hamilton Design, is celebrating its fifth anniversary this year and her projects include popular Calgary restaurants such as Añejo, the new Rodney’s Oyster House and The Beltliner. Most recently her company added an accessories line that includes linens, metal goods and sculptures. While working on the Oyster House, Hamilton immersed herself in the project, a practice she maintains for all her designs. She flew to Toronto and Vancouver where, although she wasn’t a fan, she ate countless oysters and visited lots of fish shacks to try and understand that culture. Inspired by travel and cultural exchanges, Hamilton always digs deeper into experiences— from trying to speak to taxi drivers in their own language to drawing inspiration from fashion, film and literature. “In my mind you work to travel; that’s the spice of life.” 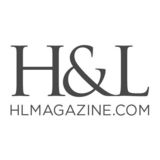