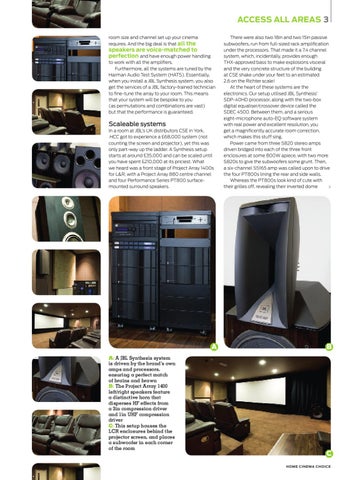 Access all areas 3 room size and channel set up your cinema requires. And the big deal is that all the

speakers are voice-matched to perfection and have enough power handling to work with all the amplifiers. Furthermore, all the systems are tuned by the Harman Audio Test System (HATS). Essentially, when you install a JBL Synthesis system, you also get the services of a JBL factory-trained technician to fine-tune the array to your room. This means that your system will be bespoke to you   (as permutations and combinations are vast)   but that the performance is guaranteed.

Scaleable systems In a room at JBL’s UK distributors CSE in York,  HCC got to experience a £68,000 system (not counting the screen and projector), yet this was only part-way up the ladder. A Synthesis setup starts at around £35,000 and can be scaled until you have spent £210,000 at its priciest. What   we heard was a front stage of Project Array 1400s   for L&R, with a Project Array 880 centre channel and four Performance Series PT800 surfacemounted surround speakers.

A A: A JBL Synthesis system is driven by the brand’s own amps and processors, ensuring a perfect match of brains and brawn B: The Project Array 1400 left/right speakers feature a distinctive horn that disperses HF effects from a 3in compression driver and 1in UHF compression driver C: This setup houses the LCR enclosures behind the projector screen, and places a subwoofer in each corner of the room

There were also two 18in and two 15in passive subwoofers, run from full-sized rack amplification under the processors. That made it a 7.4 channel system, which, incidentally, provides enough THX-approved bass to make explosions visceral and the very concrete structure of the building   at CSE shake under your feet to an estimated   2.6 on the Richter scale! At the heart of these systems are the electronics. Our setup utilised JBL Synthesis’ SDP-40HD processor, along with the two-box digital equaliser/crossover device called the   SDEC 4500. Between them, and a serious eight-microphone auto-EQ software system   with real power and excellent resolution, you   get a magnificently accurate room correction, which makes this stuff sing. Power came from three S820 stereo amps driven bridged into each of the three front enclosures at some 800W apiece, with two more S820s to give the subwoofers some grunt. Then,   a six-channel S5165 amp was called upon to drive the four PT800s lining the rear and side walls. Whereas the PT800s look kind of cute with their grilles off, revealing their inverted dome 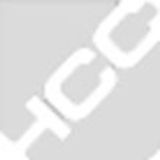