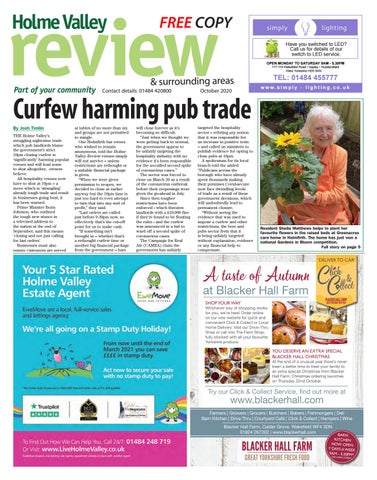 THE Holme Valley’s struggling night-time trade which pub landlords blame the government’s strict 10pm closing curfew is ‘significantly’ harming popular venues and will lead some to shut altogether, owners believe. All hospitality venues now have to shut at 10pm – a move which is ‘strangling’ already tough trade and result in businesses going bust, it has been warned. Prime Minister Boris Johnson, who outlined the tough new stance in a televised address to the nation at the end of September, said this means ‘closing and not just calling for last orders’. Businesses must also ensure customers are served

at tables of no more than six and groups are not permitted to mingle. One Holmfirth bar owner, who wished to remain anonymous, told the Holme Valley Review venues simply will not survive – unless restrictions are rethought or a suitable financial package is given. “When we were given permission to reopen, we decided to close at earlier anyway but the 10pm time is just too hard to even attempt to turn that into any sort of profit,” they said. “Last orders are called just before 9.30pm now, so effectively that’s the cut-off point for us to make cash. “If something isn’t brought in – whether that’s a rethought curfew time or another big financial package from the government – bars

will close forever as it’s becoming so difficult. “Just when we thought we were getting back to normal, the government appear to be unfairly targeting the hospitality industry with no evidence it’s been responsible for the so-called second spike of coronavirus cases.” The sector was forced to close on March 20 as a result of the coronavirus outbreak before their reopenings were given the go-ahead in July. Since then tougher restrictions have been enforced - which threaten landlords with a £10,000 fine if they’re found to be flouting the rules - and the curfew was announced in a bid to ward off a second spike of coronavirus cases. The Campaign for Real Ale (CAMRA) claim the government has unfairly

targeted the hospitality sector – refuting any notion that it was responsible for an increase in positive tests – and called on ministers to publish evidence for opting to close pubs at 10pm. A spokesman for its local branch told the added: “Publicans across the borough who have already spent thousands making their premises Covid-secure now face dwindling levels of trade as a result of these government decisions, which will undoubtedly lead to permanent closure. “Without seeing the evidence that was used to impose a curfew and other restrictions, the beer and pubs sector feels that it is being unfairly targeted without explanation, evidence or any financial help to compensate.

Resident Sheila Matthews helps to plant her favourite flowers in the raised beds at Greenacres care home in Holmfirth. The home has just won a national Gardens in Bloom competition. Full story on page 5