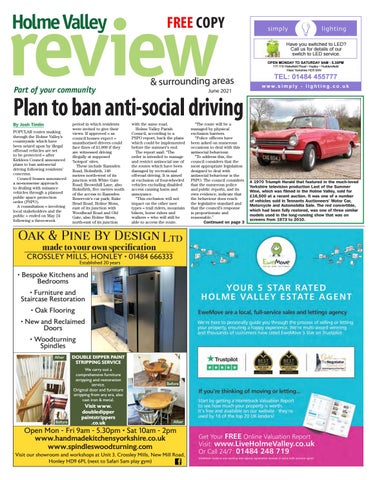 POPULAR routes snaking through the Holme Valley’s countryside which have been seized upon by illegal off-road vehicles are set to be protected – after Kirklees Council announced plans to ban anti-social driving following residents’ concerns. Council bosses announced a no-nonsense approach to dealing with nuisance vehicles through a planned public space protection order (PSPO). A consultation – involving local stakeholders and the public – ended on May 24 following a three-week

period in which residents were invited to give their views. If approved – as council bosses expect – unauthorised drivers could face fines of £1,000 if they are witnessed driving illegally at supposed ‘hotspot’ sites. These include Ramsden Road, Holmfirth, 140 metres north-west of its junction with White Gate Road; Brownhill Lane, also Holmfirth, five metres south of the access to Ramsden Reservoir’s car park; Rake Head Road, Holme Moss, east of its junction with Woodhead Road and Old Gate, also Holme Moss, north-east of its junction

with the same road. Holme Valley Parish Council, according to a PSPO report, back the plans which could be implemented before the summer’s end. The report said: “The order is intended to manage and restrict antisocial use of the routes which have been damaged by recreational off-road driving. It is aimed at exclusion of four-wheeled vehicles excluding disabled access causing harm and annoyance. “This exclusion will not impact on the other user types – trail riders, mountain bikers, horse riders and walkers – who will still be able to access the route.

made to your own specification

“The route will be a managed by physical exclusion barriers. “Police officers have been asked on numerous occasions to deal with this antisocial behaviour. “To address this, the council considers that the most appropriate legislation designed to deal with antisocial behaviour is the PSPO. The council considers that the numerous police and public reports, and its own evidence, indicate that the behaviour does reach the legislative standard and that the council’s response is proportionate and reasonable.” Continued on page 3

A 1970 Triumph Herald that featured in the much-loved Yorkshire television production Last of the Summer Wine, which was filmed in the Holme Valley, sold for £16,500 at a recent auction. It was one of a number of vehicles sold in Tennants Auctioneers’ Motor Car, Motorcycle and Automobilia Sale. The red convertible, which had been fully restored, was one of three similar models used in the long-running show that was on screens from 1973 to 2010.