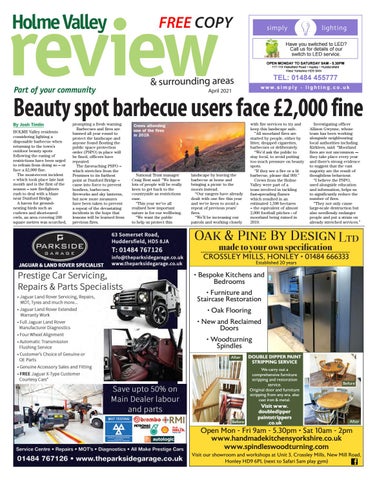 HOLME Valley residents considering lighting a disposable barbecue when returning to the town’s outdoor beauty spots following the easing of restrictions have been urged to refrain from doing so – or face a £2,000 fine. The most-recent incident – which took place late last month and is the first of the season – saw firefighters rush to deal with a blaze near Dunford Bridge. A haven for groundnesting birds such as curlews and short-eared owls, an area covering 200 square metres was scorched,

prompting a fresh warning. Barbecues and fires are banned all year round to protect the landscape and anyone found flouting the public space protection order (PSPO) in place will be fined, officers have repeated. The far-reaching PSPO – which stretches from the Pennines to its furthest point at Dunford Bridge – came into force to prevent bonfires, barbecues, fireworks and sky lanterns, but now more measures have been taken to prevent a repeat of the devastating incidents in the hope that lessons will be learned from previous fires.

Crews attending one of the fires in 2019.

National Trust manager Craig Best said: “We know lots of people will be really keen to get back to the countryside as restrictions ease. “This year we’ve all realised how important nature is for our wellbeing. “We want the public to help us protect this

landscape by leaving the barbecue at home and bringing a picnic to the moors instead. “Our rangers have already dealt with one fire this year and we’re keen to avoid a repeat of previous years’ fires. “We’ll be increasing our patrols and working closely

with fire services to try and keep this landscape safe. “All moorland fires are started by people, either by litter, dropped cigarettes, barbecues or deliberately. “We’d ask the public to stay local, to avoid putting too much pressure on beauty spots. “If they see a fire or a lit barbecue, please dial 999.” Crews from the Holme Valley were part of a team involved in tackling fast-spreading flames which resulted in an estimated 1,500 hectares – the equivalent of almost 2,000 football pitches - of moorland being ruined in 2019.

Investigating officer Allison Gwynne, whose team has been working alongside neighbouring local authorities including Kirklees, said: “Moorland fires are not uncommon -– they take place every year and there’s strong evidence to suggest that the vast majority are the result of thoughtless behaviour. “I believe the PSPO, used alongside education and information, helps us to significantly reduce the number of fires. “They not only cause large-scale destruction but also needlessly endanger people and put a strain on already stretched services.”

made to your own specification