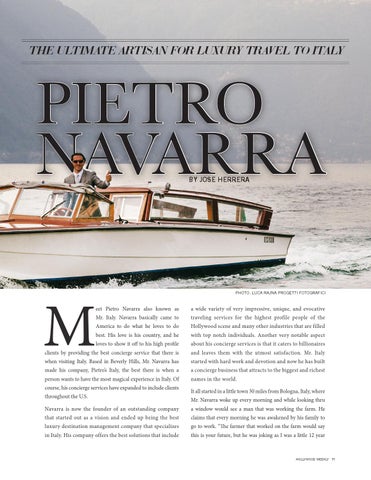 THE ULTIMATE ARTISAN FOR LUXURY TRAVEL TO ITALY

a wide variety of very impressive, unique, and evocative

traveling services for the highest profile people of the

America to do what he loves to do

Hollywood scene and many other industries that are filled

best. His love is his country, and he

loves to show it off to his high profile

about his concierge services is that it caters to billionaires

clients by providing the best concierge service that there is

and leaves them with the utmost satisfaction. Mr. Italy

when visiting Italy. Based in Beverly Hills, Mr. Navarra has

started with hard work and devotion and now he has built

a concierge business that attracts to the biggest and richest

person wants to have the most magical experience in Italy. Of

names in the world.

course, his concierge services have expanded to include clients throughout the U.S.

It all started in a little town 30 miles from Bologna, Italy, where Mr. Navarra woke up every morning and while looking thru

Navarra is now the founder of an outstanding company

a window would see a man that was working the farm. He

claims that every morning he was awakened by his family to

in Italy. His company offers the best solutions that include

this is your future, but he was joking as I was a little 12 year