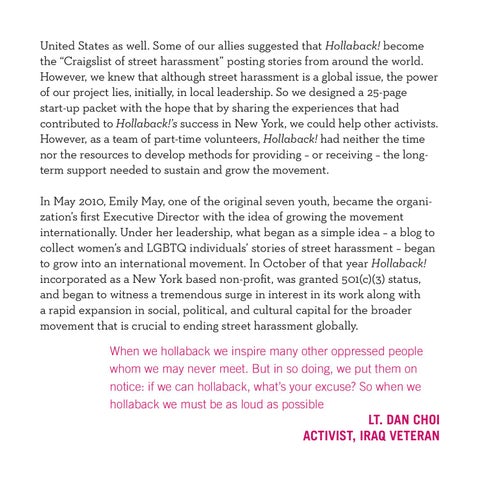 United States as well. Some of our allies suggested that Hollaback! become the “Craigslist of street harassment” posting stories from around the world. However, we knew that although street harassment is a global issue, the power of our project lies, initially, in local leadership. So we designed a 25-page start-up packet with the hope that by sharing the experiences that had contributed to Hollaback!’s success in New York, we could help other activists. However, as a team of part-time volunteers, Hollaback! had neither the time nor the resources to develop methods for providing – or receiving – the longterm support needed to sustain and grow the movement. In May 2010, Emily May, one of the original seven youth, became the organization’s first Executive Director with the idea of growing the movement internationally. Under her leadership, what began as a simple idea – a blog to collect women’s and LGBTQ individuals’ stories of street harassment – began to grow into an international movement. In October of that year Hollaback! incorporated as a New York based non-profit, was granted 501(c)(3) status, and began to witness a tremendous surge in interest in its work along with a rapid expansion in social, political, and cultural capital for the broader movement that is crucial to ending street harassment globally. When we hollaback we inspire many other oppressed people whom we may never meet. But in so doing, we put them on notice: if we can hollaback, what’s your excuse? So when we hollaback we must be as loud as possible

This is our first annual State of the Streets report. It includes our impact, our model, and profiles of thirteen of our sites internationally.