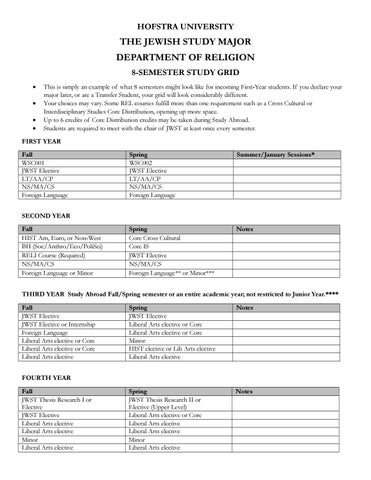 This is simply an example of what 8 semesters might look like for incoming First-Year students. If you declare your major later, or are a Transfer Student, your grid will look considerably different. Your choices may vary. Some REL courses fulfill more than one requirement such as a Cross Cultural or Interdisciplinary Studies Core Distribution, opening up more space. Up to 6 credits of Core Distribution credits may be taken during Study Abroad. Students are required to meet with the chair of JWST at least once every semester.

For more information and to meet your faculty, visit our Department website at: https://www.hofstra.edu/academics/colleges/hclas/rel/jewish/index.html

WHY STUDY JEWISH STUDIES? http://studyreligion.org/why/index.html What can I do with a JWST degree? https://www.hofstra.edu/academics/colleges/hclas/rel/rel_career.html Some courses (AP/IB/Transfer) taken prior to Hofstra can count toward the major. Non-JWST courses taken prior to your first year can count toward general education requirements or elective credits, whether taken at Hofstra or transferred in.

NOTES * You are not required to take Summer or January courses for this major (for which there is no financial aid). ** The Religion Department strongly encourages study of a foreign language beyond Level 3. *** Students are encouraged to consider a minor or double major in a foreign language, Latin American & Caribbean Studies, European Studies, Italian Studies, Middle Eastern and Central Asian Studies, African Studies or Asian Studies, if they are interested in the history of a particular world region, or another liberal arts discipline such as Anthropology, Economics, Philosophy, Religion, Sociology, among many others. Other possibilities are Womenâ&#x20AC;&#x2122;s Studies and Global Studies. You might also consider a second major in a completely unrelated field such as Computer Science, Biology, Dance, Television/Film or Statistics. ****In addition to going on study abroad for either semester in their third year, students can go for the entire academic year in their third year, for a semester in their second or fourth years, or for a short-term program in the summer or during the January break. + See the Religion Department website for possible Internship venues and opportunities: https://www.hofstra.edu/academics/colleges/hclas/rel/rel_internship.html