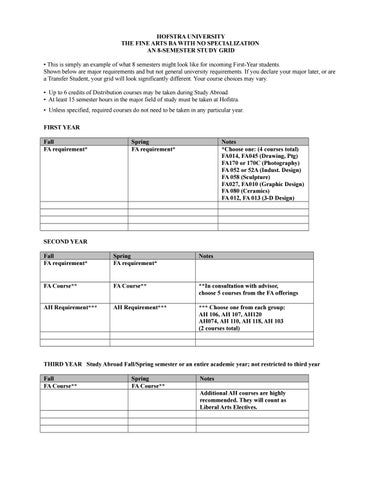 HOFSTRA UNIVERSITY THE FINE ARTS BA WITH NO SPECIALIZATION AN 8-SEMESTER STUDY GRID • This is simply an example of what 8 semesters might look like for incoming First-Year students. Shown below are major requirements and but not general university requirements. If you declare your major later, or are a Transfer Student, your grid will look significantly different. Your course choices may vary. • Up to 6 credits of Distribution courses may be taken during Study Abroad. • At least 15 semester hours in the major field of study must be taken at Hofstra. • Unless specified, required courses do not need to be taken in any particular year. FIRST YEAR Fall FA requirement*

**In consultation with advisor, choose 5 courses from the FA offerings