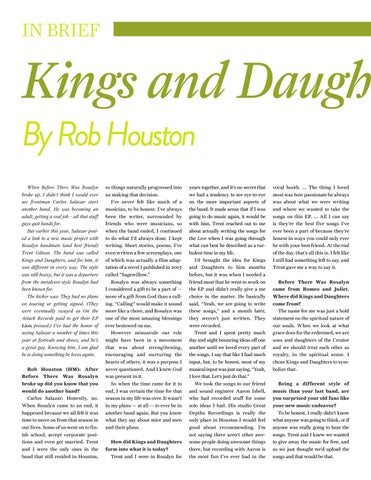 Kings and Daugh By Rob Houston When Before There Was Rosalyn broke up, I didn’t think I would ever see frontman Carlos Salazar start another band. He was becoming an adult, getting a real job – all that stuff guys quit bands for. But earlier this year, Salazar posted a link to a new music project with Rosalyn bandmate (and best friend) Trent Gibson. The band was called Kings and Daughters, and for him, it was different in every way. The style was still heavy, but it was a departure from the metalcore-style Rosalyn had been known for. The kicker was: They had no plans on touring or getting signed. (They were eventually swayed as On the Attack Records paid to get their EP Lion pressed.) I’ve had the honor of seeing Salazar a number of times this year at festivals and shows, and he’s a great guy. Knowing him, I am glad he is doing something he loves again. Rob Houston (HM): After Before There Was Rosalyn broke up did you know that you would do another band? Carlos Salazar: Honestly, no. When Rosalyn came to an end, it happened because we all felt it was time to move on from that season in our lives. Some of us went on to finish school, accept corporate positions and even get married. Trent and I were the only ones in the band that still resided in Houston,

so things naturally progressed into us making that decision. I’ve never felt like much of a musician, to be honest. I’ve always been the writer, surrounded by friends who were musicians, so when the band ended, I continued to do what I’d always done. I kept writing. Short stories, poems. I’ve even written a few screenplays, one of which was actually a film adaptation of a novel I published in 2007 called “Sagewillow.” Rosalyn was always something I considered a gift to be a part of — more of a gift from God than a calling. “Calling” would make it sound more like a chore, and Rosalyn was one of the most amazing blessings ever bestowed on me. However minuscule our role might have been in a movement that was about strengthening, encouraging and nurturing the hearts of others, it was a purpose I never questioned. And I knew God was present in it. So when the time came for it to end, I was certain the time for that season in my life was over. It wasn’t in my plans — at all — to ever be in another band again. But you know what they say about mice and men and their plans. How did Kings and Daughters form into what it is today? Trent and I were in Rosalyn for

years together, and it’s no secret that we had a tendency to see eye-to-eye on the more important aspects of the band. It made sense that if I was going to do music again, it would be with him. Trent reached out to me about actually writing the songs for the Lion when I was going through what can best be described as a turbulent time in my life. I’d brought the idea for Kings and Daughters to him months before, but it was when I needed a friend most that he went to work on the EP and didn’t really give a me choice in the matter. He basically said, “Yeah, we are going to write these songs,” and a month later, they weren’t just written. They were recorded. Trent and I spent pretty much day and night bouncing ideas off one another until we loved every part of the songs. I say that like I had much input, but, to be honest, most of my musical input was just saying, “Yeah, I love that. Let’s just do that.” We took the songs to our friend and sound engineer Aaron Isbell, who had recorded stuff for some solo ideas I had. His studio Great Depths Recordings is really the only place in Houston I would feel good about recommending. I’m not saying there aren’t other awesome people doing awesome things there, but recording with Aaron is the most fun I’ve ever had in the

vocal booth. ... The thing I loved most was how passionate he always was about what we were writing and where we wanted to take the songs on this EP. ... All I can say is they’re the best five songs I’ve ever been a part of because they’re honest in ways you could only ever be with your best friend. At the end of the day, that’s all this is. I felt like I still had something left to say, and Trent gave me a way to say it. Before There Was Rosalyn came from Romeo and Juliet. Where did Kings and Daughters come from? The name for me was just a bold statement on the spiritual nature of our souls. When we look at what grace does for the redeemed, we are sons and daughters of the Creator and we should treat each other as royalty, in the spiritual sense. I chose Kings and Daughters to symbolize that. Being a different style of music than your last band, are you surprised your old fans like your new music endeavor? To be honest, I really didn’t know what anyone was going to think, or if anyone was really going to hear the songs. Trent and I knew we wanted to give away the music for free, and so we just thought we’d upload the songs and that would be that. 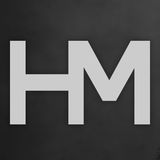