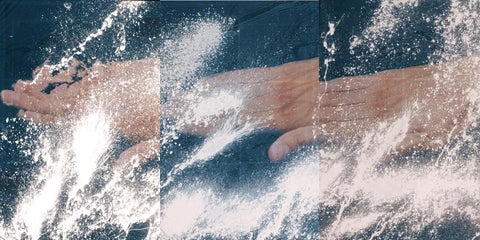 The following pages are commissioned works and works in progress available through the artist.

SWIMMERS Chicago river view in front of the Merchandise Mart

painting from installation in Hawaii

HERBERT MIGDOLL - BIO My paintings evolve from a digitally acrylic under-painting completed with hand-applied coats of metallic oil enamels. Creating paintings using this concept began in 1980, just prior to my receiving an NEA grant. This award was given to me to pursue my transition into mixed media painting, from my work as a Graphic artist and a fine art photographer. Following two years at Pratt Institute, I entered Cooper Union and progressed with Neil Wellever, who taught painting and Brietenbach who instructed photography. After graduating from Cooper 1959, I completed my art studies at Berkley in California and at MIT; also, I studied independently with the painter Cusumano. My first professional job was as a graphic designer at the Museum of Modern Art (MOMA) from l960 to l963, which contributed to the continuation of my education as an artist. My three years at MOMA honed my focus and vision of American painting. I had the extraordinary opportunity to design and collaborate with Arthur Drexler on his MOMA publication, Architecture USA, published by MOMA. I studied under Drexler at Pratt for one season and then became the graphics designer in the design department . My work is in MOMA’s permanent collection. LOS TARASCANS, Dye Transfer, permanent collection MoMA

From MOMA, I went to work for The Joffrey Ballet, and evolved into their Design Director; creating their graphics, photography and three stage sets to date. My stage set for Robert Joffrey’s work entitled POSTCARDS was on view as part of the Joffrey program in Chicago 2008. One of my montages, created for the mixed media ballet Astarte 1969 by Robert Joffrey, landed the cover of Time Magazine. From l979 to the present The Joffrey Ballet has been a simultaneous career while pursuing my life as a fine artist. In l969, I received a Fulbright to explore landscape and ballet in Denmark. My trip to Paris in l974 was part of a commission from Robert Joffrey to create a backdrop for his world premiere ballet “Postcards.” Seeing my work the size of an opera stage made an indelible impression on my aesthetic aspirations. Through Grace Mayer, Edward Stiechen’s assistant at MOMA, I met Ziva Kraus, Director of Ikona gallery in Venice, Italy. Kraus gave me my first one-person show in l980 in Venice, Italy. Venice was a revelation and propelled me in pursuing modular elements as a focal point in my work. At this same time I received my NEA grant and was able to seriously pursue my new direction in working as a painter with mixed media.

In 1989, following my development in working with poured enamel oils, I received a commission through the David Heath Gallery to create a 10 x 20 Foot multi-panel painting for the Commerce Bank of St. Louis. SAINT LOUIS BLUE In 1992, I got an interview with Leo Castelli by way of the director of the American Artists Association Wilder Green, who I knew because of my association with him while we were both working at the Museum of Modern Art. My hope in going to Leo was to get a recommendation to show my work to Illeana Sonnabend. Leo was very responsive to my work and called Illeana while I was present to suggest that she look at my work, Upon going to Sonnabend Gallery I was greeted by the then new Gallery Director, Mr Homen who set up a second meeting with Illeana which never occurred. Leo also agreed during my interview with him to show my Venetian Regatta piece in his then newly opened Graphics Gallery if Sonnabend said no. My show was to follow an exhibition by neon artist Dan Flavin. Castelli fell ill and died about a year later during which time I was unable to formalize an exhibition due to Castelli’s illness. Leo was so gracious and supportive I shall never forget his positive impact on my own spirit and sense of value as an artist.

In 1996, I was invited back to Venice Italy in 1995 to take part in an exhibition within the Biennale, entitled Art Laguna. For this exhibit I created a 40 feet long x 40 inches wide painting in 5 segments. The work was of oil enamel and acrylic on canvas and was constructed for flotation. The piece floated directly in the lagoon waters as part of the l00th anniversary of the Venice Biennale along with the works of l7 other artist’s pieces, mine being the only painting. Philip Ryland assistant director at the Guggenheim in Venice was very supportive of my piece and considered it as one of the best in the show. Philip gave me a small discretionary stipend to help with my expenses in Venice during the installation of the piece in the lagoon.The director for the 1995 Biennale, Jean Claude, selected the work for the show. In this large floating painting, I poured oil enamel directly onto the image both concealing and revealing its figurative substructure. This highly interactive relationship between a digitally acrylic painted photo being either partially or totally obliterated by the pouring of oil enamel, acrylic and polyurethane over it, established my aesthetic. The maiden voyage for this floating painting “Swimming Dancer” took place in a lap pool on the estate of Jack Larsen in East Hampton. Larsen contributed to the production of the work and it was included as part of his annual Gala for Longhouse.

2000, much of my mixed media work form Venice and some segmented figure paintings, like the Silver Faun were the basis for a one person exhibit at the Chicago Cultural Center, curated by Greg Knight. Knight decided to curate this exhibit after viewing my work shown the previous year at the Fassbender Gallery, in Chicago. I was awarded a commission from the City of Chicago’s Department of Cultural Affairs, lead by Lois Weisberg, in 2002. Through this commission I created a painted mural installed on the Chicago riverbank site. “Swimmers” was 8 feet high and 275 feet long, and composed of acrylic and oil enamel on a vinyl mesh sub strait. It was viewed from Michigan Avenue Bridge in Chicago and also from the architecture tour boats, which were docked directly across from it. 2004, the Flatfile Gallery in Chicago featured my new gallery work GRASSES, which is focused on a 45 feet long modular mural composed of 29 stretched linen panels with acrylic and metallic silver oil enamel. This work reveals the unique imagery created when a subject is segmented. The resulting modular details embody the magic of motion and stillness conjoined. The Dragon-boat paintings along with GRASSES comprised my first one person show at Flatfile Gallery. 2005, I received the Gottlieb Award for painting.

2006, based on the recommendation of Gallerist, Paul Klein, I received a major commission from the McCormick Foundation to create a mixed media installation, TURNING IN CLOSED COURSE 6 feet by 37 feet based on the Polar Bear, Lee who while swimming in his humongous tank in Chicago’s Lincoln Park Zoo and he did indeed turn in closed course. This commission is permanently installed at the McCormick Center in Chicago, and is very well received. 2008, I was commissioned by Steven Little , Director of the Honolulu Academy of the Arts to create a major painting installation DANCING DEITIES, which required my going to Bhutan to photograph a unique festival in which the Monks , both farmers and priests, come together to dance for one another, for the people of the area and for the Princess of his beautiful acetic Palace. It was extraordinary. My next work will be a result of the studies I created while in Bhutan. 2010 I created a large scale painting SWIMMERS 300, an installation for the Grand Rapids ArtPrize 2010. This is a modular work composed of 30 panels comprising one horizontal figure 15 feet high and 300 feet long. It is a mixed media painting combining acrylics and oil enamels on vinyl mesh

ARTISTS STATEMENT There is an intrinsic uniqueness to each medium in the arts. Oils have an innate vitality in their physical presence. When paint is poured onto a surface I literally hold my breath in anticipation of the forms and textures which the essence of this medium creates. If you give paint its head it becomes a kind of collaborator between the artist and the mediums’ physicality. Oil has its own life force when unleashed within the boundaries of a work. This involvement with oil enamels is best seen in my most current work, SWIMMER 300

Painting: acrylics, oil enamels, and epoxy on canvas. 4 feet x 40 feet. This floating painting was selected by Jean Claude for the exhibit arte laguna as part of the venice bienalle 1995, it floated in the canal as one of17 works. Swimming Dancer was the only painting among a field of sculptures. Seventeen artists were included, each from a different country. the image pictured here was of a trial maiden voyage which was photographed in jack larson’s lap pool in east hampton, for one of his longhouse galas.

SWIMMING DANCER at left with text by Gamal El-Zoghby, Architect May 16, 1995 MIGDOLL EXPANSION RECONSTRUCTION &amp; RE-EMERGENCE (Text from Venice Biennale catalogue 1995 for Art Laguna Exhibit) At once, the many split moments extend and expand the imagery of the present time into a pure sense of motion. At once, the active bodies in the ordinary experience of motion are separated and reconstructed in a spatial sequence. At once, the literal photographic impressions are submerged and re-emerged in transformational painting aesthetics. These terms of the metaphysical, the constructional and the transcendental are to premeditative fields in the art of Herbert Migdoll. Herbert Migdoll’s multi-layered technique begins under the surface of the canvas where the photographic image pushes itself into the fibers’ weaving, and it’s built upwardly the addition of thick interactive fluid mixtures, the flow regulated according to the artist’s controlling sense of concealing and revealing, to achieve his artistic signature.