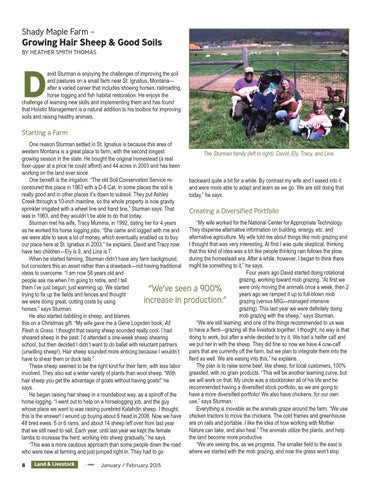 avid Sturman is enjoying the challenges of improving the soil and pastures on a small farm near St. Ignatius, Montana— after a varied career that includes shoeing horses, railroading, horse logging and fish habitat restoration. He enjoys the challenge of learning new skills and implementing them and has found that Holistic Management is a natural addition to his toolbox for improving soils and raising healthy animals.

One reason Sturman settled in St. Ignatius is because this area of western Montana is a great place to farm, with the second longest The Sturman family (left to right): David, Ely, Tracy, and Lina. growing season in the state. He bought the original homestead (a real fixer-upper at a price he could afford) and 44 acres in 2003 and has been working on the land ever since. One benefit is the irrigation. “The old Soil Conservation Service rebackward quite a bit for a while. By contrast my wife and I eased into it contoured this place in 1963 with a D-8 Cat. In some places the soil is and were more able to adapt and learn as we go. We are still doing that really good and in other places it’s down to subsoil. They put Ashley today,” he says. Creek through a 10-inch mainline, so the whole property is now gravity sprinkler irrigated with a wheel line and hand line,” Sturman says. That Creating a Diversified Portfolio was in 1963, and they wouldn’t be able to do that today. “My wife worked for the National Center for Appropriate Technology. Sturman met his wife, Tracy Mumma, in 1992, dating her for 4 years They dispense alternative information on building, energy, etc. and as he worked his horse logging jobs. “She came and logged with me and alternative agriculture. My wife told me about things like mob grazing and we were able to save a lot of money, which eventually enabled us to buy I thought that was very interesting. At first I was quite skeptical, thinking our place here at St. Ignatius in 2003,” he explains. David and Tracy now that this kind of idea was a bit like people thinking rain follows the plow, have two children—Ely is 9, and Lina is 7. during the homestead era. After a while, however, I began to think there When he started farming, Sturman didn’t have any farm background, but considers this an asset rather than a drawback—not having traditional might be something to it,” he says. Four years ago David started doing rotational ideas to overcome. “I am now 58 years old and grazing, working toward mob grazing. “At first we people ask me when I’m going to retire, and I tell were only moving the animals once a week, then 2 them I’ve just begun, just warming up. We started “We’ve seen a 900% years ago we ramped it up to full-blown mob trying to fix up the fields and fences and thought increase in production.” grazing (versus MIG—managed intensive we were doing great, cutting costs by using grazing). This last year we were definitely doing horses,” says Sturman. mob grazing with the sheep,” says Sturman. He also started dabbling in sheep, and blames “We are still learning, and one of the things recommended to us was this on a Christmas gift. “My wife gave me a Gene Logsden book, All to have a flerd—grazing all the livestock together. I thought, no way is that Flesh is Grass. I thought that raising sheep sounded really cool. I had doing to work, but after a while decided to try it. We had a heifer calf and sheared sheep in the past; I’d attended a one-week sheep shearing we put her in with the sheep. They did fine so now we have 4 cow-calf school, but then decided I didn’t want to do ballet with reluctant partners pairs that are currently off the farm, but we plan to integrate them into the (unwilling sheep!). Hair sheep sounded more enticing because I wouldn’t flerd as well. We are easing into this,” he explains. have to shear them or dock tails.” The plan is to raise some beef, like sheep, for local customers, 100% These sheep seemed to be the right kind for their farm, with less labor grassfed, with no grain products. “This will be another learning curve, but involved. They also eat a wider variety of plants than wool sheep. “With we will work on that. My uncle was a stockbroker all of his life and he hair sheep you get the advantage of goats without having goats!” he recommended having a diversified stock portfolio, so we are going to says. have a more diversified portfolio! We also have chickens, for our own He began raising hair sheep in a roundabout way, as a spinoff of the use,” says Sturman. horse logging. “I went out to help on a horselogging job, and the guy Everything is movable as the animals graze around the farm. “We use whose place we went to was raising purebred Katahdin sheep. I thought, this is the answer! I wound up buying about 6 head in 2006. Now we have chicken tractors to move the chickens. The cold frames and greenhouse are on rails and portable. I like the idea of how working with Mother 48 bred ewes, 5 or 6 rams, and about 14 sheep left over from last year Nature can take, and also heal.” The animals utilize the plants, and help that we still need to sell. Each year, until last year we kept the female the land become more productive. lambs to increase the herd, working into sheep gradually,” he says. “We are seeing this, as we progress. The smaller field to the east is “This was a more cautious approach than some people down the road where we started with the mob grazing, and now the grass won’t stop who were new at farming and just jumped right in. They had to go 8