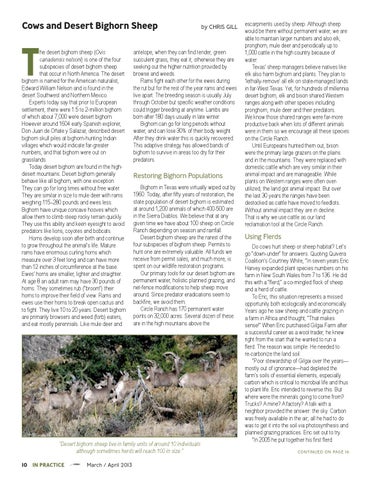 he desert bighorn sheep (Ovis canadensis nelsoni) is one of the four subspecies of desert bighorn sheep that occur in North America. The desert bighorn is named for the American naturalist, edward William Nelson and is found in the desert Southwest and Northern Mexico. experts today say that prior to european settlement, there were 1.5 to 2-million bighorn of which about 7,000 were desert bighorn. However around 1604 early Spanish explorer, Don Juan de oñate y Salazar, described desert bighorn skull piles at bighorn-hunting Indian villages which would indicate far-greater numbers, and that bighorn were out on grasslands. Today desert bighorn are found in the highdesert mountains. Desert bighorn generally behave like all bighorn, with one exception: They can go for long times without free water. They are similar in size to mule deer with rams weighing 115–280 pounds and ewes less. Bighorn have unique concave hooves which allow them to climb steep rocky terrain quickly. They use this ability and keen eyesight to avoid predators like lions, coyotes and bobcats. Horns develop soon after birth and continue to grow throughout the animal’s life. Mature rams have enormous curling horns which measure over 3 feet long and can have more than 12 inches of circumference at the base. ewes’ horns are smaller, lighter and straighter. At age 8 an adult ram may have 30 pounds of horns. They sometimes rub (“broom”) their horns to improve their field of view. rams and ewes use their horns to break open cactus and to fight. They live 10 to 20 years. Desert bighorn are primarily browsers and weed (forb) eaters, and eat mostly perennials. Like mule deer and

antelope, when they can find tender, green succulent grass, they eat it; otherwise they are seeking out the higher nutrition provided by browse and weeds. rams fight each other for the ewes during the rut but for the rest of the year rams and ewes live apart. The breeding season is usually July through october but specific weather conditions could trigger breeding at anytime. Lambs are born after 180 days usually in late winter. Bighorn can go for long periods without water, and can lose 30% of their body weight. After they drink water this is quickly recovered. This adaptive strategy has allowed bands of bighorn to survive in areas too dry for their predators.

Restoring Bighorn Populations Bighorn in Texas were virtually wiped out by 1960. Today, after fifty years of restoration, the state population of desert bighorn is estimated at around 1,200 animals of which 400-500 are in the Sierra Diablos. We believe that at any given time we have about 100 sheep on Circle ranch depending on season and rainfall. Desert bighorn sheep are the rarest of the four subspecies of bighorn sheep. Permits to hunt one are extremely valuable. All funds we receive from permit sales, and much more, is spent on our wildlife restoration programs. our primary tools for our desert bighorn are permanent water, holistic planned grazing, and net-fence modifications to help sheep move around. Since predator eradications seem to backfire, we avoid them. Circle ranch has 170 permanent water points on 32,000 acres. Several dozen of these are in the high mountains above the

“Desert bighorn sheep live in family units of around 10 individuals although sometimes herds will reach 100 in size.” 10 IN PRACTICE

escarpments used by sheep. Although sheep would be there without permanent water, we are able to maintain larger numbers and also elk, pronghorn, mule deer and periodically up to 1,000 cattle in the high country because of water. Texas’ sheep managers believe natives like elk also harm bighorn and plants. They plan to ‘lethally-remove’ all elk on state-managed lands in far-West Texas. Yet, for hundreds of millennia desert bighorn, elk and bison shared Western ranges along with other species including pronghorn, mule deer and their predators. We know those shared ranges were far-more productive back when lots of different animals were in them so we encourage all these species on the Circle ranch. Until europeans hunted them out, bison were the primary large grazers on the plains and in the mountains. They were replaced with domestic cattle which are very similar in their animal impact and are manageable. While plants on Western ranges were often overutilized, the land got animal impact. But over the last 30 years the ranges have been destocked as cattle have moved to feedlots. Without animal impact they are in decline. That is why we use cattle as our land reclamation tool at the Circle ranch.

Using Flerds Do cows hurt sheep or sheep habitat? Let’s go “down-under” for answers. Quoting Quivera Coalition’s Courtney White, “In seven years eric Harvey expanded plant species numbers on his farm in New South Wales from 7 to 136. He did this with a “flerd,” a co-mingled flock of sheep and a herd of cattle. To eric, this situation represents a missed opportunity both ecologically and economically. Years ago he saw sheep and cattle grazing in a farm in Africa and thought, “That makes sense!” When eric purchased Gilgai Farm after a successful career as a wool trader, he knew right from the start that he wanted to run a flerd. The reason was simple: He needed to re-carbonize the land soil. “Poor stewardship of Gilgai over the years— mostly out of ignorance—had depleted the farm’s soils of essential elements, especially carbon which is critical to microbial life and thus to plant life. eric intended to reverse this. But where were the minerals going to come from? Trucks? A mine? A factory? A talk with a neighbor provided the answer: the sky. Carbon was freely available in the air; all he had to do was to get it into the soil via photosynthesis and planned grazing practices. eric set out to try. “In 2005 he put together his first flerd CONTINUED ON PAGE 16