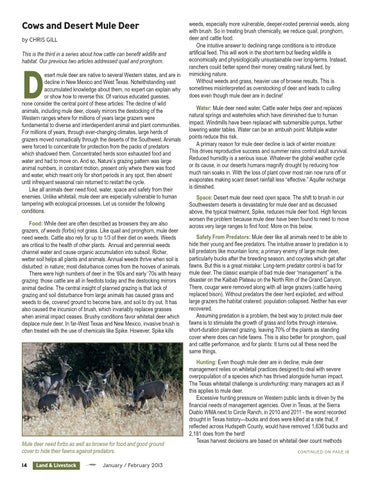 This is the third in a series about how cattle can benefit wildlife and habitat. Our previous two articles addressed quail and pronghorn.

esert mule deer are native to several Western states, and are in decline in New Mexico and West Texas. Notwithstanding vast accumulated knowledge about them, no expert can explain why or show how to reverse this: Of various educated guesses, none consider the central point of these articles: The decline of wild animals, including mule deer, closely mirrors the destocking of the Western ranges where for millions of years large grazers were fundamental to diverse and interdependent animal and plant communities. For millions of years, through ever-changing climates, large herds of grazers moved nomadically through the deserts of the Southwest. Animals were forced to concentrate for protection from the packs of predators which shadowed them. Concentrated herds soon exhausted food and water and had to move on. And so, Nature’s grazing pattern was large animal numbers, in constant motion, present only where there was food and water, which meant only for short periods in any spot, then absent until infrequent seasonal rain returned to restart the cycle. Like all animals deer need food, water, space and safety from their enemies. Unlike whitetail, mule deer are especially vulnerable to human tampering with ecological processes. Let us consider the following conditions. Food: While deer are often described as browsers they are also grazers, of weeds (forbs) not grass. Like quail and pronghorn, mule deer need weeds. Cattle also rely for up to 1/3 of their diet on weeds. Weeds are critical to the health of other plants. Annual and perennial weeds channel water and cause organic accumulation into subsoil. Richer, wetter soil helps all plants and animals. Annual weeds thrive when soil is disturbed: in nature; most disturbance comes from the hooves of animals. There were high numbers of deer in the ‘60s and early ‘70s with heavy grazing: those cattle are all in feedlots today and the destocking mirrors animal decline. The central insight of planned grazing is that lack of grazing and soil disturbance from large animals has caused grass and weeds to die, covered ground to become bare, and soil to dry out. It has also caused the incursion of brush, which invariably replaces grasses when animal impact ceases. Brushy conditions favor whitetail deer which displace mule deer. In far-West Texas and New Mexico, invasive brush is often treated with the use of chemicals like Spike. However, Spike kills

Mule deer need forbs as well as browse for food and good ground cover to hide their fawns against predators. 14

weeds, especially more vulnerable, deeper-rooted perennial weeds, along with brush. So in treating brush chemically, we reduce quail, pronghorn, deer and cattle food. One intuitive answer to declining range conditions is to introduce artificial feed. This will work in the short term but feeding wildlife is economically and physiologically unsustainable over long-terms. Instead, ranchers could better spend their money creating natural feed, by mimicking nature. Without weeds and grass, heavier use of browse results. This is sometimes misinterpreted as overstocking of deer and leads to culling does even though mule deer are in decline! Water: Mule deer need water. Cattle water helps deer and replaces natural springs and waterholes which have diminished due to human impact. Windmills have been replaced with submersible pumps, further lowering water tables. Water can be an ambush point: Multiple water points reduce this risk. A primary reason for mule deer decline is lack of winter moisture: This drives reproductive success and summer rains control adult survival. Reduced humidity is a serious issue. Whatever the global weather cycle or its cause, in our deserts humans magnify drought by reducing how much rain soaks in. With the loss of plant cover most rain now runs off or evaporates making scant desert rainfall less “effective.” Aquifer recharge is dimished. Space: Desert mule deer need open space. The shift to brush in our Southwestern deserts is devastating for mule deer and as discussed above, the typical treatment, Spike, reduces mule deer food. High fences worsen the problem because mule deer have been found to need to move across very large ranges to find food: More on this below. Safety From Predators: Mule deer like all animals need to be able to hide their young and flee predators. The intuitive answer to predation is to kill predators like mountain lions; a primary enemy of large mule deer, particularly bucks after the breeding season, and coyotes which get after fawns. But this is a great mistake: Long-term predator control is bad for mule deer. The classic example of bad mule deer “management” is the disaster on the Kaibab Plateau on the North Rim of the Grand Canyon. There, cougar were removed along with all large grazers (cattle having replaced bison). Without predators the deer herd exploded, and without large grazers the habitat cratered: population collapsed. Neither has ever recovered. Assuming predation is a problem, the best way to protect mule deer fawns is to stimulate the growth of grass and forbs through intensive, short-duration planned grazing, leaving 70% of the plants as standing cover where does can hide fawns. This is also better for pronghorn, quail and cattle performance, and for plants: It turns out all these need the same things. Hunting: Even though mule deer are in decline, mule deer management relies on whitetail practices designed to deal with severe overpopulation of a species which has thrived alongside human impact. The Texas whitetail challenge is underhunting: many managers act as if this applies to mule deer. Excessive hunting pressure on Western public lands is driven by the financial needs of management agencies. Over in Texas, at the Sierra Diablo WMA next to Circle Ranch, in 2010 and 2011 - the worst recorded drought in Texas history—bucks and does were killed at a rate that, if reflected across Hudspeth County, would have removed 1,636 bucks and 2,181 does from the herd! Texas harvest decisions are based on whitetail deer count methods CONTINUED ON PAGE 18