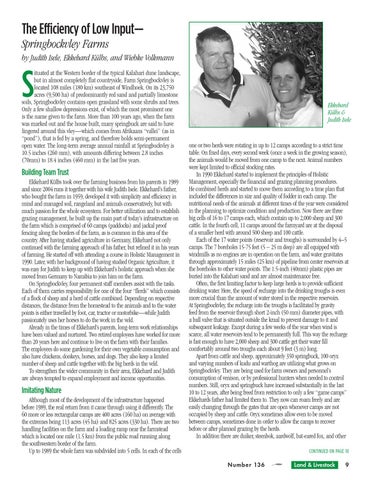 ituated at the Western border of the typical Kalahari dune landscape, but in almost completely flat countryside, Farm Springbockvley is located 108 miles (180 km) southeast of Windhoek. On its 23,750 acres (9,500 ha) of predominantly red sand and partially limestone soils, Springbockvley contains open grassland with some shrubs and trees. Only a few shallow depressions exist, of which the most prominent one is the name given to the farm. More than 100 years ago, when the farm was marked out and the house built, many springbuck are said to have lingered around this vley—which comes from Afrikaans “vallei” (as in “pond”), that is fed by a spring, and therefore holds semi-permanent open water. The long-term average annual rainfall at Springbockvley is 10.5 inches (260 mm), with amounts differing between 2.8 inches (70mm) to 18.4 inches (460 mm) in the last five years.

Building Team Trust Ekkehard Külbs took over the farming business from his parents in 1989 and since 2004 runs it together with his wife Judith Isele. Ekkehard’s father, who bought the farm in 1959, developed it with simplicity and efficiency in mind and managed soil, rangeland and animals conservatively, but with much passion for the whole ecosystem. For better utilization and to establish grazing management, he built up the main part of today’s infrastructure on the farm which is comprised of 60 camps (paddocks) and jackal proof fencing along the borders of the farm, as is common in this area of the country. After having studied agriculture in Germany, Ekkehard not only continued with the farming approach of his father, but refined it in his years of farming. He started off with attending a course in Holistic Management in 1990. Later, with her background of having studied Organic Agriculture, it was easy for Judith to keep up with Ekkehard’s holistic approach when she moved from Germany to Namibia to join him on the farm. On Springbockvley, four permanent staff members assist with the tasks. Each of them carries responsibility for one of the four “flerds” which consists of a flock of sheep and a herd of cattle combined. Depending on respective distances, the distance from the homestead to the animals and to the water points is either travelled by foot, car, tractor or motorbike—while Judith passionately uses her horses to do the work in the veld. Already in the times of Ekkehard’s parents, long-term work relationships have been valued and nurtured. Two retired employees have worked for more than 20 years here and continue to live on the farm with their families. The employees do some gardening for their own vegetable consumption and also have chickens, donkeys, horses, and dogs. They also keep a limited number of sheep and cattle together with the big herds in the veld. To strengthen the wider community in their area, Ekkehard and Judith are always tempted to expand employment and income opportunities.

Imitating Nature Although most of the development of the infrastructure happened before 1989, the real return from it came through using it differently. The 60 more or less rectangular camps are 400 acres (160 ha) on average with the extremes being 113 acres (45 ha) and 825 acres (330 ha). There are two handling facilities on the farm and a loading ramp near the farmstead which is located one mile (1.5 km) from the public road running along the southwestern border of the farm. Up to 1989 the whole farm was subdivided into 5 cells. In each of the cells

one or two herds were rotating in up to 12 camps according to a strict time table. On fixed days, every second week (once a week in the growing season), the animals would be moved from one camp to the next. Animal numbers were kept limited to official stocking rates. In 1990 Ekkehard started to implement the principles of Holistic Management, especially the financial and grazing planning procedures. He combined herds and started to move them according to a time plan that included the differences in size and quality of fodder in each camp. The nutritional needs of the animals at different times of the year were considered in the planning to optimize condition and production. Now there are three big cells of 16 to 17 camps each, which contain up to 2,000 sheep and 300 cattle. In the fourth cell, 11 camps around the farmyard are at the disposal of a smaller herd with around 500 sheep and 100 cattle. Each of the 17 water points (reservoir and troughs) is surrounded by 4–5 camps. The 7 boreholes 15-75 feet (5 – 25 m deep) are all equipped with windmills as no engines are in operation on the farm, and water gravitates through approximately 15 miles (25 km) of pipeline from center reservoirs at the boreholes to other water points. The 1.5-inch (40mm) plastic pipes are buried into the Kalahari sand and are almost maintenance free. Often, the first limiting factor to keep large herds is to provide sufficient drinking water. Here, the speed of recharge into the drinking troughs is even more crucial than the amount of water stored in the respective reservoirs. At Springbockvley, the recharge into the troughs is facilitated by gravity feed from the reservoir through short 2-inch (50 mm) diameter pipes, with a ball valve that is situated outside the kraal to prevent damage to it and subsequent leakage. Except during a few weeks of the year when wind is scarce, all water reservoirs tend to be permanently full. This way the recharge is fast enough to have 2,000 sheep and 300 cattle get their water fill comfortably around two troughs each about 9 feet (3 m) long. Apart from cattle and sheep, approximately 350 springbuck, 100 oryx and varying numbers of kudu and warthog are utilizing what grows on Springbockvley. They are being used for farm owners and personnel’s consumption of venison, or by professional hunters when needed to control numbers. Still, oryx and springbuck have increased substantially in the last 10 to 12 years, after being freed from restriction to only a few “game camps” Ekkehards father had limited them to. They now can roam freely and are easily changing through the gates that are open whenever camps are not occupied by sheep and cattle. Oryx sometimes allow even to be moved between camps, sometimes done in order to allow the camps to recover before or after planned grazing by the herds. In addition there are duiker, steenbok, aardwolf, bat-eared fox, and other CONTINUED ON PAGE 10