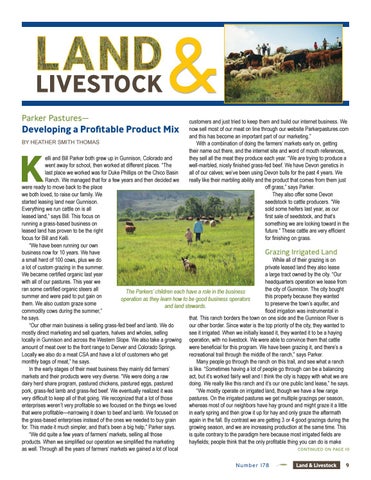 customers and just tried to keep them and build our internet business. We now sell most of our meat on line through our website Parkerpastures.com and this has become an important part of our marketing.” With a combination of doing the farmers’ markets early on, getting their name out there, and the internet site and word of mouth references, they sell all the meat they produce each year. “We are trying to produce a well-marbled, nicely finished grass-fed beef. We have Devon genetics in all of our calves; we’ve been using Devon bulls for the past 4 years. We really like their marbling ability and the product that comes from them just off grass,” says Parker. They also offer some Devon seedstock to cattle producers. “We sold some heifers last year, as our first sale of seedstock, and that’s something we are looking toward in the future.” These cattle are very efficient for finishing on grass.

elli and Bill Parker both grew up in Gunnison, Colorado and went away for school, then worked at different places. “The last place we worked was for Duke Phillips on the Chico Basin Ranch. We managed that for a few years and then decided we were ready to move back to the place we both loved, to raise our family. We started leasing land near Gunnison. Everything we run cattle on is all leased land,” says Bill. This focus on running a grass-based business on leased land has proven to be the right focus for Bill and Kelli. “We have been running our own business now for 10 years. We have Grazing Irrigated Land a small herd of 100 cows, plus we do While all of their grazing is on a lot of custom grazing in the summer. private leased land they also lease We became certified organic last year a large tract owned by the city. “Our with all of our pastures. This year we headquarters operation we lease from ran some certified organic steers all the city of Gunnison. The city bought The Parkers’ children each have a role in the business summer and were paid to put gain on this property because they wanted operation as they learn how to be good business operators them. We also custom graze some to preserve the town’s aquifer, and and land stewards. commodity cows during the summer,” flood irrigation was instrumental in he says. that. This ranch borders the town on one side and the Gunnison River is “Our other main business is selling grass-fed beef and lamb. We do our other border. Since water is the top priority of the city, they wanted to mostly direct marketing and sell quarters, halves and wholes, selling see it irrigated. When we initially leased it, they wanted it to be a haying locally in Gunnison and across the Western Slope. We also take a growing operation, with no livestock. We were able to convince them that cattle amount of meat over to the front range to Denver and Colorado Springs. were beneficial for this program. We have been grazing it, and there’s a Locally we also do a meat CSA and have a lot of customers who get recreational trail through the middle of the ranch,” says Parker. monthly bags of meat,” he says. Many people go through the ranch on this trail, and see what a ranch In the early stages of their meat business they mainly did farmers’ is like. “Sometimes having a lot of people go through can be a balancing markets and their products were very diverse. “We were doing a raw act, but it’s worked fairly well and I think the city is happy with what we are dairy herd share program, pastured chickens, pastured eggs, pastured doing. We really like this ranch and it’s our one public land lease,” he says. pork, grass-fed lamb and grass-fed beef. We eventually realized it was “We mostly operate on irrigated land, though we have a few range very difficult to keep all of that going. We recognized that a lot of those pastures. On the irrigated pastures we get multiple grazings per season, enterprises weren’t very profitable so we focused on the things we loved whereas most of our neighbors have hay ground and might graze it a little that were profitable—narrowing it down to beef and lamb. We focused on in early spring and then grow it up for hay and only graze the aftermath the grass-based enterprises instead of the ones we needed to buy grain again in the fall. By contrast we are getting 3 or 4 good grazings during the for. This made it much simpler, and that’s been a big help,” Parker says. growing season, and we are increasing production at the same time. This “We did quite a few years of farmers’ markets, selling all those is quite contrary to the paradigm here because most irrigated fields are products. When we simplified our operation we simplified the marketing hayfields; people think that the only profitable thing you can do is make as well. Through all the years of farmers’ markets we gained a lot of local CONTINUED ON PAGE 10 N um ber 178 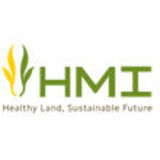