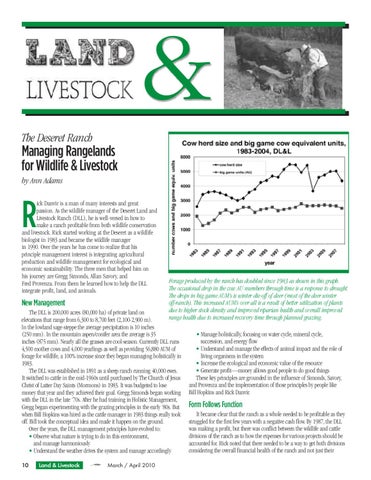 ick Danvir is a man of many interests and great passion. As the wildlife manager of the Deseret Land and Livestock Ranch (DLL), he is well-versed in how to make a ranch profitable from both wildlife conservation and livestock. Rick started working at the Deseret as a wildlife biologist in 1983 and became the wildlife manager in 1990. Over the years he has come to realize that his principle management interest is integrating agricultural production and wildlife management for ecological and economic sustainability. The three men that helped him on his journey are Gregg Simonds, Allan Savory, and Fred Provenza. From them he learned how to help the DLL integrate profit, land, and animals.

Forage produced by the ranch has doubled since 1983 as shown in this graph. The occasional drop in the cow AU numbers through time is a response to drought. The drops in big game AUM’s is winter die-off of deer (most of the deer winter off-ranch). This increased AUM’s over all is a result of better utilization of plants due to higher stock density and improved riparian health and overall improved range health due to increased recovery time through planned grazing.

The DLL is 200,000 acres (80,000 ha) of private land on elevations that range from 6,300 to 8,700 feet (2,100-2,900 m). In the lowland sage-steppe the average precipitation is 10 inches (250 mm). In the mountain aspen/conifer area the average is 35 inches (875 mm). Nearly all the grasses are cool-season. Currently DLL runs 4,500 mother cows and 4,000 yearlings as well as providing 56,880 AUM of forage for wildlife, a 100% increase since they began managing holistically in 1983. The DLL was established in 1891 as a sheep ranch running 40,000 ewes. It switched to cattle in the mid-1960s until purchased by The Church of Jesus Christ of Latter Day Saints (Mormons) in 1983. It was budgeted to lose money that year and they achieved their goal. Gregg Simonds began working with the DLL in the late ‘70s. After he had training in Holistic Management, Gregg began experimenting with the grazing principles in the early ‘80s. But when Bill Hopkins was hired as the cattle manager in 1983 things really took off. Bill took the conceptual idea and made it happen on the ground. Over the years, the DLL management principles have evolved to: • Observe what nature is trying to do in this environment, and manage harmoniously • Understand the weather drives the system and manage accordingly 10

• Manage holistically, focusing on water cycle, mineral cycle, succession, and energy flow • Understand and manage the effects of animal impact and the role of living organisms in the system • Increase the ecological and economic value of the resource • Generate profit—money allows good people to do good things These key principles are grounded in the influence of Simonds, Savory, and Provenza and the implementation of those principles by people like Bill Hopkins and Rick Danvir.

Form Follows Function It became clear that the ranch as a whole needed to be profitable as they struggled for the first few years with a negative cash flow. By 1987, the DLL was making a profit, but there was conflict between the wildlife and cattle divisions of the ranch as to how the expenses for various projects should be accounted for. Rick noted that there needed to be a way to get both divisions considering the overall financial health of the ranch and not just their

FEATURE STORIES Last fall we gathered piñon nuts from the loaded trees up Tracy Canyon. Sticky with pitch, my fingers chap in the raw fall a...

FEATURE STORIES Last fall we gathered piñon nuts from the loaded trees up Tracy Canyon. Sticky with pitch, my fingers chap in the raw fall a...