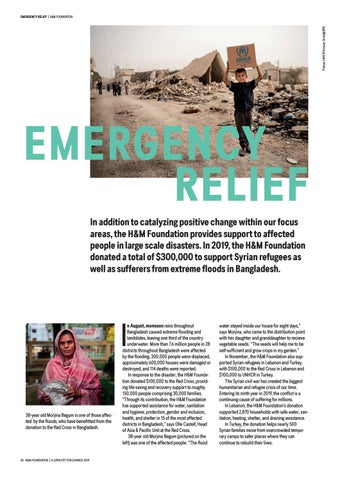 EMERGENCY RELIEF In addition to catalyzing positive change within our focus areas, the H&M Foundation provides support to affected people in large scale disasters. In 2019, the H&M Foundation donated a total of $300,000 to support Syrian refugees as well as sufferers from extreme floods in Bangladesh.

I 38-year old Morjina Begum is one of those affec­ ted by the floods, who have benefitted from the donation to the Red Cross in Bangladesh.

n August, monsoon rains throughout Bangladesh caused extreme flooding and landslides, leaving one third of the country underwater. More than 7.6 million people in 28 districts throughout Bangladesh were affected by the flooding. 300,000 people were displaced, approximately 600,000 houses were damaged or destroyed, and 114 deaths were reported. In response to the disaster, the H&M Founda­ tion donated $100,000 to the Red Cross, provid­ ing life-saving and recovery support to roughly 150,000 people comprising 30,000 families. “Through its contribution, the H&M Foundation has supported assistance for water, sanitation and hygiene, protection, gender and inclusion, health, and shelter in 15 of the most affected districts in Bangladesh,” says Olle Castell, Head of Asia & Pacific Unit at the Red Cross. 38-year old Morjina Begum (pictured on the left) was one of the affected people. “The flood

water stayed inside our house for eight days,” says Morjina, who came to the distribution point with her daughter and granddaughter to recieve vegetable seeds. “The seeds will help me to be self-sufficient and grow crops in my garden.” In November, the H&M Foundation also sup­ ported Syrian refugees in Lebanon and Turkey, with $100,000 to the Red Cross in Lebanon and $100,000 to UNHCR in Turkey. The Syrian civil war has created the biggest humanitarian and refugee crisis of our time. Entering its ninth year in 2019, the conflict is a continuing cause of suffering for millions. In Lebanon, the H&M Foundation’s donation supported 2,870 households with safe water, san­ itation, heating, shelter, and draining assistance. In Turkey, the donation helps nearly 500 Syrian families move from overcrowded tempo­ rary camps to safer places where they can continue to rebuild their lives. 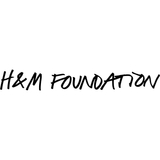 This is H&M Foundation's Annual Report – A Catalyst for Change 2017. Here we share how we have managed to achieve our goals; how we have rea...

This is H&M Foundation's Annual Report – A Catalyst for Change 2017. Here we share how we have managed to achieve our goals; how we have rea...