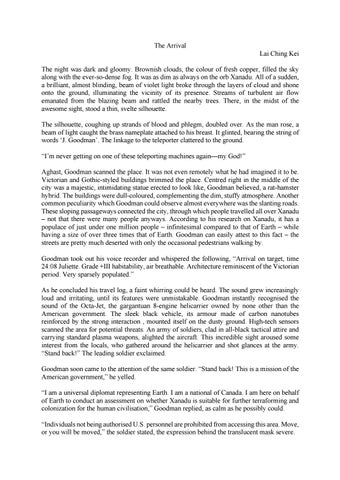 The Arrival Lai Ching Kei The night was dark and gloomy. Brownish clouds, the colour of fresh copper, filled the sky along with the ever-so-dense fog. It was as dim as always on the orb Xanadu. All of a sudden, a brilliant, almost blinding, beam of violet light broke through the layers of cloud and shone onto the ground, illuminating the vicinity of its presence. Streams of turbulent air flow emanated from the blazing beam and rattled the nearby trees. There, in the midst of the awesome sight, stood a thin, svelte silhouette. The silhouette, coughing up strands of blood and phlegm, doubled over. As the man rose, a beam of light caught the brass nameplate attached to his breast. It glinted, bearing the string of words ‘J. Goodman’. The linkage to the teleporter clattered to the ground. “I’m never getting on one of these teleporting machines again—my God!” Aghast, Goodman scanned the place. It was not even remotely what he had imagined it to be. Victorian and Gothic-styled buildings brimmed the place. Centred right in the middle of the city was a majestic, intimidating statue erected to look like, Goodman believed, a rat-hamster hybrid. The buildings were dull-coloured, complementing the dim, stuffy atmosphere. Another common peculiarity which Goodman could observe almost everywhere was the slanting roads. These sloping passageways connected the city, through which people travelled all over Xanadu – not that there were many people anyways. According to his research on Xanadu, it has a populace of just under one million people – infinitesimal compared to that of Earth – while having a size of over three times that of Earth. Goodman can easily attest to this fact – the streets are pretty much deserted with only the occasional pedestrians walking by. Goodman took out his voice recorder and whispered the following, “Arrival on target, time 24:08 Juliette. Grade +III habitability, air breathable. Architecture reminiscent of the Victorian period. Very sparsely populated.” As he concluded his travel log, a faint whirring could be heard. The sound grew increasingly loud and irritating, until its features were unmistakable. Goodman instantly recognised the sound of the Octa-Jet, the gargantuan 8-engine helicarrier owned by none other than the American government. The sleek black vehicle, its armour made of carbon nanotubes reinforced by the strong interaction , mounted itself on the dusty ground. High-tech sensors scanned the area for potential threats. An army of soldiers, clad in all-black tactical attire and carrying standard plasma weapons, alighted the aircraft. This incredible sight aroused some interest from the locals, who gathered around the helicarrier and shot glances at the army. “Stand back!” The leading soldier exclaimed. Goodman soon came to the attention of the same soldier. “Stand back! This is a mission of the American government,” he yelled. “I am a universal diplomat representing Earth. I am a national of Canada. I am here on behalf of Earth to conduct an assessment on whether Xanadu is suitable for further terraforming and colonization for the human civilisation,” Goodman replied, as calm as he possibly could. “Individuals not being authorised U.S. personnel are prohibited from accessing this area. Move, or you will be moved,” the soldier stated, the expression behind the translucent mask severe.

Goodman was petrified. He took a step forward and muttered, “Allow me to show you my identifica—” A ball of turquoise plasma was spat out of the soldier’s gun and hit Goodman right in the chest. Silently, he dropped to the floor, where he laid lifelessly in the accompaniment of gasps and screams from locals. Goodman woke up on a pristine, white bed. He was dressed in traditional Xanadu attire. His sweat left stains on the sheets. As he pondered his whereabouts, a local approached Goodman. “Sir,” her muffled voice sounded through a universal translator, “who are these people? Why are they taking our land?” This red-skinned young lady was horror-struck; her voice was trembling. Goodman did not know how to answer her. He forced a smile in response. Deepdown, he was as horrified as her. ⁂ “Are you sure about this?” Commander-in-chief of the Xanadu combat forces inquired one last time, the antsy tone in his voice revealing once again. “Because we only get one shot at this.” “I am not sure about this at all, but this is the only plan we’ve got,” Goodman replied. This was the first time he had ever held a gun. His palms were sweaty, making it difficult to apply a firm grip on the gun. He, in the midst of around ten Xanadu soldiers, strode to the Octa-Jet. The stealthy, sinister-looking helicarrier laid handsomely on the vast plains. Having familiarised themselves with the structure of the voluminous aircraft, the team went straight for the back exit. With a loud bang, the 10-inch steel door was burst open by a sizable lump of plastic explosive. The team rushed inside and headed for the control room. The inside of the aircraft was everything Goodman had expected from a state-of-the-art aircraft: high-tech panels, ultramodern lights beaming everywhere with new-fangled gadgets throughout the cabin. The team finally arrived at the control room after a series of intricate turns inside the helicarrier. Goodman trotted through the door and hustled straight for the main control panel. It was a transparent piece of glass with information shining through the surface. “Got it!” He shouted in excitement. The USB port for the main computer was firmly in his sight. He scrambled with his breast pocket and took out a thumb drive. Without a single doubt, Goodman slammed the drive into the port. The whole ship sank into darkness. The virus had successfully been injected into the ship’s main computer. Footsteps approached, the loud thumping of the standard-issue titanium cleats gone unnoticed by the overwhelmed Canadian. Moments later, all the figures in the spacious enclosure, one stooping before the access port, were faced with an elite cadre of American soldiers, the scopes of their weapons pointing ruby-red laser beams at him, readying themselves to kill.