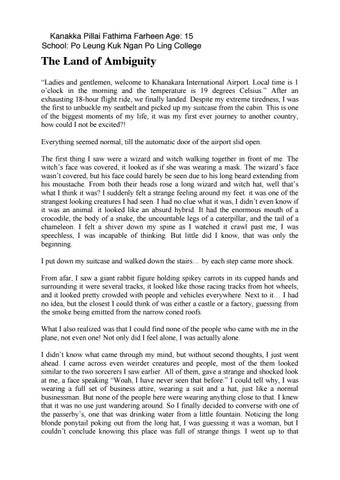 The Land of Ambiguity “Ladies and gentlemen, welcome to Khanakara International Airport. Local time is 1 o’clock in the morning and the temperature is 19 degrees Celsius.” After an exhausting 18-hour flight ride, we finally landed. Despite my extreme tiredness, I was the first to unbuckle my seatbelt and picked up my suitcase from the cabin. This is one of the biggest moments of my life, it was my first ever journey to another country, how could I not be excited?! Everything seemed normal, till the automatic door of the airport slid open. The first thing I saw were a wizard and witch walking together in front of me. The witch’s face was covered, it looked as if she was wearing a mask. The wizard’s face wasn’t covered, but his face could barely be seen due to his long beard extending from his moustache. From both their heads rose a long wizard and witch hat, well that’s what I think it was? I suddenly felt a strange feeling around my feet. it was one of the strangest looking creatures I had seen. I had no clue what it was, I didn’t even know if it was an animal. it looked like an absurd hybrid. It had the enormous mouth of a crocodile, the body of a snake, the uncountable legs of a caterpillar, and the tail of a chameleon. I felt a shiver down my spine as I watched it crawl past me, I was speechless, I was incapable of thinking. But little did I know, that was only the beginning. I put down my suitcase and walked down the stairs… by each step came more shock. From afar, I saw a giant rabbit figure holding spikey carrots in its cupped hands and surrounding it were several tracks, it looked like those racing tracks from hot wheels, and it looked pretty crowded with people and vehicles everywhere. Next to it… I had no idea, but the closest I could think of was either a castle or a factory, guessing from the smoke being emitted from the narrow coned roofs. What I also realized was that I could find none of the people who came with me in the plane, not even one! Not only did I feel alone, I was actually alone. I didn’t know what came through my mind, but without second thoughts, I just went ahead. I came across even weirder creatures and people, most of the them looked similar to the two sorcerers I saw earlier. All of them, gave a strange and shocked look at me, a face speaking “Woah, I have never seen that before.” I could tell why, I was wearing a full set of business attire, wearing a suit and a hat, just like a normal businessman. But none of the people here were wearing anything close to that. I knew that it was no use just wandering around. So I finally decided to converse with one of the passerby’s, one that was drinking water from a little fountain. Noticing the long blonde ponytail poking out from the long hat, I was guessing it was a woman, but I couldn’t conclude knowing this place was full of strange things. I went up to that

person, “Hello,” I softly spoke with some enthusiasm. The person stopped drinking, turned and looked at me. It was a minute and they were still staring, it was as if I was being examined carefully. “My name is Alkyrie,” I spoke again hoping to get a response this time. But no, not a word, just the same looks. They shrugged and eventually left. I tried the same conversation with another passer-by, no difference. Feelings of excitement and anticipation changed to sadness and bewilderment quicker than I expected. I couldn’t find anything what someone would normally expect outside an airport. My original plan included finding a taxi, getting to my hotel, and sleeping till dawn. The reality wasn’t even close to that… I sat down right on the spot. I couldn’t help but cry. No one I knew. No one I could talk to. No one liked me. I was isolated. I was friendless. I was lonely. For hours I just sat there bent on my knees, weeping, till I noticed a shadow on the ground. I slowly lifted my head up to see what it was; I could barely see from my swollen eyes. I rubbed it several times and I finally could a rough image. It was a dog. No, not a creature I couldn’t recognize, it was actually a dog, a German Shephard to be specific, it looked quite old. It started licking me all over, it even licked away my tears running across my cheeks. I don’t know if my swollen eyes were tricking me but I noticed the dog smiling through its little wrinkles. It soon sat down right next to me. “Hello there I am Alkryie,” I introduced myself. It stuck out its tongue, smiling at me, it gave out one of its paw gesturing for a handshake, I smiled back and gladly shook its hand. I started playing with it for hours and I didn’t even get tired. I had a genuine smile on my face, from a dog. I actually felt happy. That’s when I got to know, it’s all about the people’s mindset. A dog, is one of the creatures with a normal mind, that doesn’t differentiate among people, they don’t care about the people’s appearance nor identity, they are always willing to be a man’s best friend. While for humans, if there weren’t different mentalities of how and whether to accept people of other regions and countries, this type of situation wouldn’t even occur. If only the mind of humans was like a dog’s, ‘alienation’ wouldn’t exist.