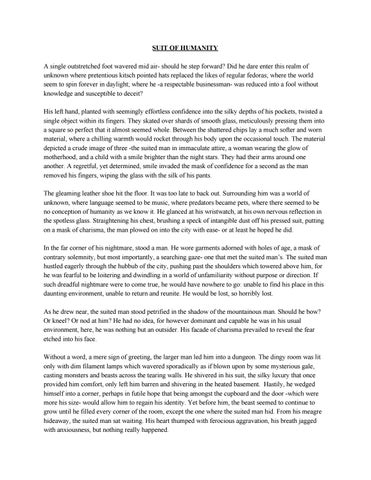 Vania Chow Sung Wing Age: 14 Shatin College ESF SUIT OF HUMANITY A single outstretched foot wavered mid air- should he step forward? Did he dare enter this realm of unknown where pretentious kitsch pointed hats replaced the likes of regular fedoras; where the world seem to spin forever in daylight; where he -a respectable businessman- was reduced into a fool without knowledge and susceptible to deceit? His left hand, planted with seemingly effortless confidence into the silky depths of his pockets, twisted a single object within its fingers. They skated over shards of smooth glass, meticulously pressing them into a square so perfect that it almost seemed whole. Between the shattered chips lay a much softer and worn material, where a chilling warmth would rocket through his body upon the occasional touch. The material depicted a crude image of three -the suited man in immaculate attire, a woman wearing the glow of motherhood, and a child with a smile brighter than the night stars. They had their arms around one another. A regretful, yet determined, smile invaded the mask of confidence for a second as the man removed his fingers, wiping the glass with the silk of his pants. The gleaming leather shoe hit the floor. It was too late to back out. Surrounding him was a world of unknown, where language seemed to be music, where predators became pets, where there seemed to be no conception of humanity as we know it. He glanced at his wristwatch, at his own nervous reflection in the spotless glass. Straightening his chest, brushing a speck of intangible dust off his pressed suit, putting on a mask of charisma, the man plowed on into the city with ease- or at least he hoped he did. In the far corner of his nightmare, stood a man. He wore garments adorned with holes of age, a mask of contrary solemnity, but most importantly, a searching gaze- one that met the suited manâ&#x20AC;&#x2122;s. The suited man hustled eagerly through the hubbub of the city, pushing past the shoulders which towered above him, for he was fearful to be loitering and dwindling in a world of unfamiliarity without purpose or direction. If such dreadful nightmare were to come true, he would have nowhere to go: unable to find his place in this daunting environment, unable to return and reunite. He would be lost, so horribly lost. As he drew near, the suited man stood petrified in the shadow of the mountainous man. Should he bow? Or kneel? Or nod at him? He had no idea, for however dominant and capable he was in his usual environment, here, he was nothing but an outsider. His facade of charisma prevailed to reveal the fear etched into his face. Without a word, a mere sign of greeting, the larger man led him into a dungeon. The dingy room was lit only with dim filament lamps which wavered sporadically as if blown upon by some mysterious gale, casting monsters and beasts across the tearing walls. He shivered in his suit, the silky luxury that once provided him comfort, only left him barren and shivering in the heated basement. Hastily, he wedged himself into a corner, perhaps in futile hope that being amongst the cupboard and the door -which were more his size- would allow him to regain his identity. Yet before him, the beast seemed to continue to grow until he filled every corner of the room, except the one where the suited man hid. From his meagre hideaway, the suited man sat waiting. His heart thumped with ferocious aggravation, his breath jagged with anxiousness, but nothing really happened.

Until the door behind him thumped. The larger man shifted his way steadily towards him, his odd features still the unchanging mask of stoicness. Was his expedition in life to end so soon? What pain would be inflicted upon him? Would his final sight, final memory of his daughter really be of her rushing out of the door late to school? He had always dreamt of seeing her amount to more. The suited manâ&#x20AC;&#x2122;s bottom lip began to quiver upon the final thought. The cupboard beside him rattled violently, as if engaging in a perplexing march in ensemble with the thudding door; the man shrunk further back into his shell of boxes. The outlandish man struggled with the dainty lock. A mass of dark hair dragged into the room, it was a woman, a she-monster, filling the room with unpleasant dankness. She was everything the suited man envisioned hell to be: unforgiving, presiding, and nauseating in appearance. The two leant in, perhaps debating which extravagant was best suited to exterminate him! Or where to deposit his body! Or how to inform his family of their loss- no, they were foreign, they were different, they would never do such acts of condolence, thought the suited man. But none of his morbid imaginations occured. Instead the two embraced, clenching their giant hands around one another in delight. Pure delight. The suited man stared incredulously at the splendidly horrific sight of love, of care, of empathy spilling out before his eyes. Should he avert his gaze? He always felt it was a rude intrusion to watch a couple, a family, expressing their joy. The unfamiliar man took off his mask, revealing the armour of empathy and care that hid underneath. Contrarily, the suited man seemed to regain his former sword of identity, of confidence, of effortless charisma. With this, the mountainous giants seemed to progressively sink towards a more ordinary size the transcendental winking sunlight returned, dispelling the ominous aura that sank over the foreign land. The suited man no longer felt fear, for despite their differences in hat preferences, in demeanor, even in location and culture, they were united by the fundamental underlying ideals of society: empathy, love, and family- and that, thought the suited man, made a world of a difference for an outsider like himself. A single foot pressed down with unwavering certainty, it was time to return home.