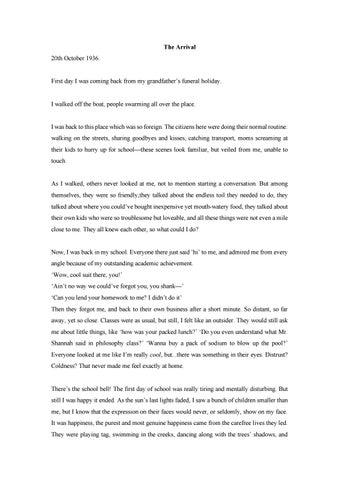 First day I was coming back from my grandfather’s funeral holiday.

I walked off the boat, people swarming all over the place.

I was back to this place which was so foreign. The citizens here were doing their normal routine: walking on the streets, sharing goodbyes and kisses, catching transport, moms screaming at their kids to hurry up for school—these scenes look familiar, but veiled from me, unable to touch.

As I walked, others never looked at me, not to mention starting a conversation. But among themselves, they were so friendly;they talked about the endless toil they needed to do, they talked about where you could’ve bought inexpensive yet mouth-watery food, they talked about their own kids who were so troublesome but loveable, and all these things were not even a mile close to me. They all knew each other, so what could I do?

Now, I was back in my school. Everyone there just said ‘hi’ to me, and admired me from every angle because of my outstanding academic achievement. ‘Wow, cool suit there, you!’ ‘Ain’t no way we could’ve forgot you, you shank—’ ‘Can you lend your homework to me? I didn’t do it’ Then they forgot me, and back to their own business after a short minute. So distant, so far away, yet so close. Classes were as usual, but still, I felt like an outsider. They would still ask me about little things, like ‘how was your packed lunch?’ ‘Do you even understand what Mr. Shannah said in philosophy class?’ ‘Wanna buy a pack of sodium to blow up the pool?’ Everyone looked at me like I’m really cool, but...there was something in their eyes. Distrust? Coldness? That never made me feel exactly at home.

There’s the school bell! The first day of school was really tiring and mentally disturbing. But still I was happy it ended. As the sun’s last lights faded, I saw a bunch of children smaller than me, but I know that the expression on their faces would never, or seldomly, show on my face. It was happiness, the purest and most genuine happiness came from the carefree lives they led. They were playing tag, swimming in the creeks, dancing along with the trees’ shadows, and

laughing. Silvery, clear laughter. They had never known the pain of living in a totally unknown country, without anyone to care, to scold, to scream, or to love them. Or maybe no one even wanted to know about them. They played on until voices rung in the distance, calling them home for homemade dinner, and their parents tucked them into bed. And for what I knew, I never left that spot, even when all of the kids left.

Then, I went to the apartment that I called home here. This place was very white, with white walls, white ceiling, white marble tiles, white bed, white table, white door, white...ok, the list is too long and I’m not gonna get on or I’ll need another thousand words. This place had really good conditions, but I hated it. This place reminded me of a jail, with a simple colour, and no other kinds of decoration. It was hostile and dark, reminding me of my gloomiest days (NOW).

Every day was just another boring day. Maybe it would be interrupted with a few letters back from my faraway home, but it would be nowhere near comforting. If my family was in a good mood, they would write: Boy: Don’t ever ask for more money. The cash we gave you should be enough for your school fee and normal paying. Keep on studying and get a high mark back. Or I’ll personally come and ask the Headmaster to expel you. This is for your own good. A Father who hates his son

Or on the days they felt bad, they would write: Boy: This is your last warning. NEVER ask for my sympathy AGAIN. This was your choice to live outside the country. So take responsibility! From Father whom I hate A LOT and hates me as well

Maybe, maybe someone would envy me, because I got the chance to learn in a traditionally top school in the world, but I tell you, this wasn’t always good. Yes, you’d learn tons of things here, but, did not suppose you could learn how to cooperate with others here. It’s weird enough, but I seriously thought that something happened in this country. Blood would be shed. Weapons would no longer be rusted. No one trusted a foreigner as he/she might be a spy. This place was

fraught with coldness, even ‘blanker’ than my white apartment I’d never be a part of it. Never. And I hoped with all my heart, that I’d never need to stay here if anything happened.

George Xavier on an alien land