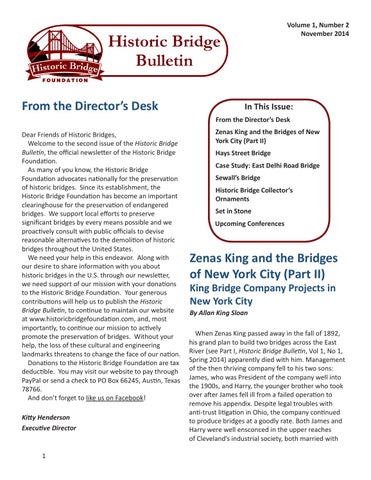 From the Director’s Desk

In This Issue: From the Director’s Desk

Zenas King and the Bridges of New York City (Part II) King Bridge Company Projects in New York City By Allan King Sloan When Zenas King passed away in the fall of 1892, his grand plan to build two bridges across the East River (see Part I, Historic Bridge Bulletin, Vol 1, No 1, Spring 2014) apparently died with him. Management of the then thriving company fell to his two sons: James, who was President of the company well into the 1900s, and Harry, the younger brother who took over after James fell ill from a failed operation to remove his appendix. Despite legal troubles with anti-trust litigation in Ohio, the company continued to produce bridges at a goodly rate. Both James and Harry were well ensconced in the upper reaches of Cleveland’s industrial society, both married with 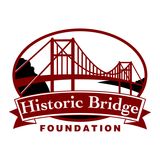